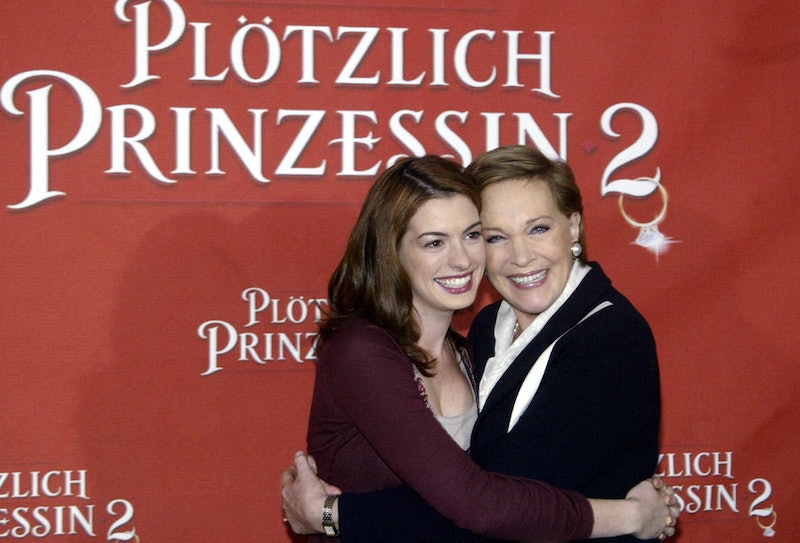 Sunday night at the Oscars, Julie Andrews took the stage. It was, ahem, one of my favorite things, of the night and of always, because Julie Andrews is always amazing and should be everywhere all the time. But Lady Gaga's surprisingly calm Sound Of Music Oscars tribute and Andrew's words about the film's 50th anniversary were not the only highlights. In fact, one of the best things to come out of Julie Andrews at the Oscars didn't even take place at the Oscars — it took place on Instagram, or, rather, wherever Anne Hathaway was watching the Oscars.

Hathaway, who won Best Supporting Actress at the Oscars in 2013 for Les Miserables, called back to her acting roots Sunday night with an Instagram referencing her breakout film, The Princess Diaries. There was a time in Hathaway's career immediately post-Diaries that she made several concerted efforts to separate herself from the modern Disney princess image, but now that she's an established actor and an Oscar winner the truth can come out: Nobody ever truly leaves Genovia. And Andrews and Hathaway will always be its ruling family. The evidence is all in Hathaway's caption:

We'll always have Genovia. And its national anthem.

"Forever will your banner wave," indeed.

Also please never forget that Chris Pine was a part of these movies.