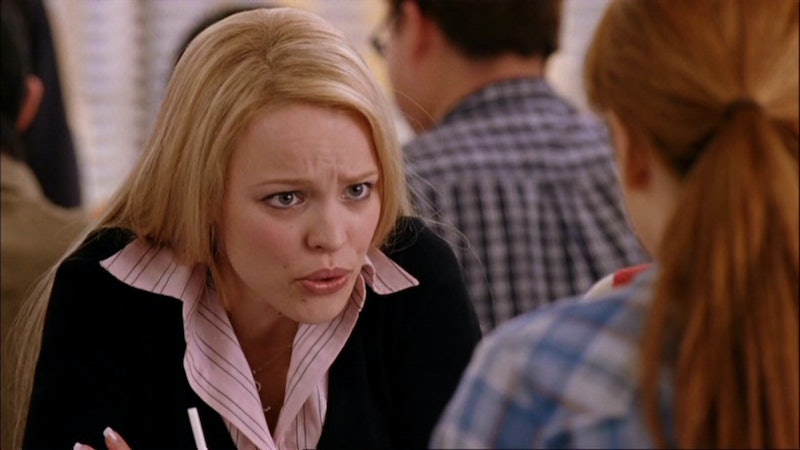 As teens, our motto, whether we wanted to admit it or not, was D.R.E.A.M.: Drama Rules Everything Around Me. I mostly blame the prevalence of The O.C. and the dangerous ease of LiveJournal for incubating tiny, teenage tensions into full, blow-out situations. Over time, our time and energy demanded to be funneled in more productive ways. Take, for instance, jobs. We eventually grew up and got one, which severely cut into our random drama-having time. Mostly, all of us just get to a point, usually not too late in life, when we simply no longer have any interest in living life stuck in that fully emotionally exhausted state that perpetually plagues all drama-prone people. Most of us outgrow the allure of creating and continuing drama because it's not worth tapping into those precious energy reserves. As years pass, we all go through more life experiences and ultimately learn that life is a lot better when lived drama-free. Most of us learn this.

However, unfortunately, there will always remain a few drama-loving clingers who will relish in shouting matches that could have been avoided were it for a little clear, patient communication (or maybe a quick burrito break because, let's be honest here, hanger can certainly spark a heated argument or two); They make forgiveness sounds with their mouth and face while secretly continuing holding a grudge; They make their life and the lives of the people around them more miserable by giving in to immature, theatrical impulses. And undoubtedly, almost always, these will be the exactly same people who swear that they "hate drama" and are "so over drama" and frequently talk about "avoiding drama". But if you pay careful attention, you can spot perpetrators and thereby avoid inviting additional soap opera story lines into your life. Because, seriously, you could do without. Here are some ways to spot someone who, despite proclamations of being allergic to drama, are actually magnets for it:

They are always immediately down to gossip

I try not to talk shit about people as a general rule, not even certain exes, who are kinda asking for it. It's just not worth the inevitable dirty feeling you'll have afterward. That said, I also recognize the human need to air frustration and verbally unpack our brains. Sometimes a portion of that mental luggage involves thoughts about other people. It happens. But if someone is constantly running their mouth about people—whether you know them or not—in a negative way, run your body away. This is not a person you need to be friends with. A few seconds of "okay, let's cover our bases and mention the general, main updates on the lives of our shared friends" chatter at the start a hangout is totally acceptable and normal—but that is it. When a new friend doesn't really even know you but feels comfortable going into detail about another person's faults or missteps, imagine what they might share about you.

They're either very up or very down, but never balanced

Each time you GChat this person, you get one of two wildly exaggerated responses: Either incredibly happy and positive—a bajillion kitten videos, heart emoticons, and frantic attempts to make plans to grab drinks together immediately—or they promptly start venting their typo-riddled complaints, avoiding answering cordial questions, and then go chat-MIA for hours. There's no in-between for this person. They're always either having the best or the worst day of their life.

They fish for sympathy or compliments

Whether the fishing comes in the form of texting you an insulting screen grab from an acquaintance or ex's Instagram with a caption like "??", which is clearly just begging you to disagree with the offending sender. Another entails going on and on about an issue they hate but do nothing to fix. Sometimes this person will trap you into shopping with them and basically demand a five-paragraph support argument about why that top looks good on them.

They need a lot of attention

Inventing random, super specific social rules is like breathing for these people. Should you or another person miss this dramatic human's silent cue for introducing them to someone or refilling their beer at a party, watch out. They never ask for something—they just expect it, and get furious when you don't correctly guess what that something is.

Sucky things happen frequently and yeah, a lot of times, life is super unfair. Hey, welcome to adulthood. A dramatic person will always stick on something that is admittedly annoying or unfortunate but ultimately not that big of a deal. Examples include: minor wardrobe malfunctions, when a host didn't completely plan the party menu around their staunch dietary restrictions, when they don't properly dress for bad weather, and shoes that hurt. A quick bitch sesh about a tiny bummer every now and then is NBD, but laboriously elaborating on the suckdom of something stupid is a sign a person might be more than a bit dramatic by nature.

Discussing potentially difficult topic or feelings in person removes a lot of the ambiguity typed words can leave. Most adults opt for in-person conversations over easily-misinterpreted texts or emails. But the dramatic person sees those channels as the only option for hashing something out—and conveniently, a welcome opportunity to amp up the intensity of their own feelings and opinions. Let's just say there are probably a lot of all-caps sentences coming from this person, whereas a normal, well-adjusted person would opt for an in-person chat.

They start sentences with a lot of "but" statements

Examples include: "I shouldn't be telling you this, but...", "I don't wanna talk shit, but...", and "I love them, but...". You know how the phrase "I'm not racist, but..." exists for racists? It's the same with drama junkies. If you shouldn't be telling someone something and you recognize that enough to say so, and you choose to continue anyway, you're asking for whatever trouble comes your way as a result.

Deciding on a spot for a group dinner is a nightmare with this person. "I hate that place! The service is always so slow and their margaritas taste like expired Warheads!" Chill, dude. Conversely, their opinions can border on fanatical. "THIS EMPANADA FOOD TRUCK WILL CHANGE YOUR LIFE AND MAKE YOUR HAIR SHINY!" Honestly, it's pretty intense.

They use the word "drama" often

You almost never hear the word "drama" as an adult unless it's in reference to the Netflix category getting the least queue action in your life. If you're living well, you probably never even think about that word. Recently I was trying to explain a friend's recent confusing behavior to another pal when he asked, "Is she just into drama?" I hadn't even considered that as an option, but...yeah! I think she is. And most people who self-identify as a person who "doesn't do drama" obviously does, otherwise the act would have never even crossed their mind.

More like this
15 Ways To Tell Someone Was Just Talking Behind Your Back
By Carolyn Steber
25 Questions To Ask Your Friends When You're Bored
By Lexi Inks
4 Most Outspoken Zodiac Signs
By Kristine Fellizar
Are Gemini & Capricorn Compatible In A Relationship?
By Kristine Fellizar
Get Even More From Bustle — Sign Up For The Newsletter