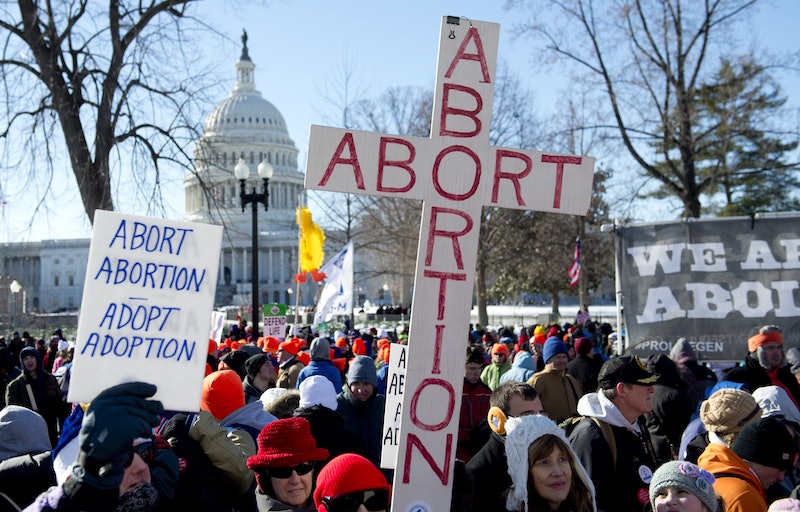 Obstetrician and long-time anti-abortion activist Dr. John Willke, a polarizing figure who led the charge against abortion in the 20th century, died on Friday at his home in Cincinnati, according to a statement released by his family. He was 89 years old. Willke has been in the spotlight since legalized abortion became a political issue in the late '60s and early '70s, becoming one of the leading voices in the fight against a woman's right to choose.

The physician served as president of the National Right to Life Committee, the oldest anti-abortion organization in the United States, for most of the 1980s. Willke and his wife, Barbara, also founded the Right to Life of Greater Cincinnati nearly 40 years ago.

"Willke was the leading statesman addressing the second civil rights struggle of our nation," Paula Westwood, the current executive director of the Right to Life of Greater Cincinnati, said in a statement. "He met with presidents and popes and crossed the globe, but his passion was always to ensure the right to life for helpless unborn children and other vulnerable people."

National Right to Life news editor Dave Andrusko added in an editorial on Saturday that Willke acted as a "good will ambassador" for the anti-abortion movement during his time with both organizations.

The controversial physician first gained notoriety in the early '70s with the Handbook on Abortion, which is often viewed as the first piece of "pro-life" literature that inevitably helped shape the movement. Published in 1971, the booklet is laid out in question-and-answer form, providing readers with tailored right-to-life arguments against abortion. "It's a very striking document and his voice was and continues to be an important voice on that side," journalist Linda Greenhouse, who researched Willke for her book on the early U.S. abortion debate, said in an interview with NPR in 2010.

But Willke's true claim to fame outside anti-abortion circles came from his insistence that women cannot get pregnant from rape or sexual assault — a belief he frequently peddled despite contradictory scientific research and data. Willke wrote in an article for the journal Christian Life Resources in 1999:

There's no greater emotional trauma that can be experienced by a woman than an assault rape. This can radically upset her possibility of ovulation, fertilization, implantation and even nurturing of a pregnancy.

This idea has since influenced numerous anti-abortion politicians, including former Rep. Todd Aiken, who lost his U.S. Senate campaign after stating that a woman's reproductive system can "shut the whole thing down" following rape. Willke reportedly stood by his flawed science in 2012, telling the Associated Press that Aiken was correct in his assertion that women do not get pregnant from rape. However, the doctor clarified that Aiken was wrong in referencing "legitimate rape."

In addition to serving as president of the National Right to Life Committee and establishing the Right to Life of Greater Cincinnati, Willke co-founded the Life Issues Institute and the International Right to Life Federation. But it's in Ohio, a heated abortion battleground, where Willke will be missed most. In a statement released over the weekend, Ohio Attorney General Mike DeWine, an abortion foe, remembered Willke as a "stalwart leader in giving a voice to the most vulnerable in our society."

More like this
How To Fight For Reproductive Rights, Based On How Much Time You Have
By Courtney Young
23 Abortion Funds In States With Trigger Bans To Donate To
By Emma Carey
LGBT+ Men Fleeing Afghanistan Were Denied Asylum By The Home Office, New Findings Show
By Sam Ramsden
Celebrities & President Biden Are Enraged By The Leaked Roe v. Wade Decision
By Alyssa Lapid
Get Even More From Bustle — Sign Up For The Newsletter