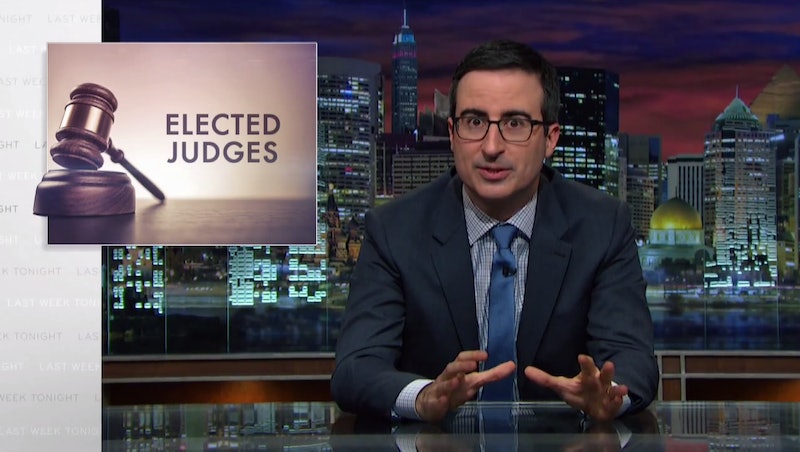 Earlier this month, Alabama Chief Justice Roy Moore issued an order to the state's probate judges, prohibiting them from issuing marriage licenses to same-sex marriage couples even though a federal judge had struck down the state's gay marriage ban. This brazen show of authority prompted the always alert John Oliver to investigate into elected state judges, how they are chosen, and how they operate. What he found was that, despite the very democratic-sounding title, elected judges are thoroughly corrupt, from their campaign ads to how campaign donors affect their rulings.

Ah yes, judges — "wearers of America's only formal muumuus." Oliver opens his segment pointing out that though they make up our country's judicial system, we hardly think about them, unless they do something bold that makes the news, such as disobey a federal court and order people working under him to also disobey. That's exactly what Justice Moore did in his attempt to thwart gay marriage from happening in his state of Alabama.

In a clip, Moore is shown saying:

Not only can the Supreme Court override a state, that's basically its job.

So how did this man become the highest judicial officer in the state? Like 85 percent of state judges in America, Oliver explains, Moore was elected. These elections occur in 39 states, a scale of this size is only seen in one other country: Bolivia. And to emphasize how little Americans know about the country of Bolivia, Oliver shows us the wrong highlighted country on a South American map, just like he did last week for Uruguay. This time, he tricks us twice, because we literally know nothing about Bolivia.

This game is never not going to be fun.

Come on, they could at least go through the motions of pretending there was another candidate.... You're in L.A. — just pretend you're considering Blake Lively for the job. Movie studios do that all the time.

But when judges do face competition, they run campaign ads that are even more over-the-top than politicians' ads. Like Allen Loughry's ad, in which he points out that his name is pronounced like "law" and "free" and that his son is named Justice Loughry. "That's right — Justus Loughry."

Yup, I call my son Justice, I call my dog Preamble, and I call my penis The Gavel. Vote for me. Boom.

Or Paul Newby, who hired a bluegrass singer to write a jingle for him.

But then there's Greg Beard, whose Cops-style ad announces him as a volunteer diver with the search and rescue team, in what is perhaps the least relevant ad for a judge's qualifications, ever.

Of course, it makes sense. Because when I'm choosing a judge, the only thing I really care about is who can hold their breath the longest.

What's alarming, Oliver notes, is that all three of these men won their elections and are currently working judges.

However, these hokey ads are completely innocuous when compared to another type of campaign video. Many judges also present themselves as tougher on issues to appease the popular opinion and gain favor with the public, no matter how wrong the popular choice might be. This is especially the case with issues relating to crime and incarceration, which have inspired some "horrifying" attack ads.

In one, faceless inmates proudly relay the murders they committed and one of them reveals that the opposing judge, Justice Thomas Kilbride, had sided with them over law enforcement and the victims.

The truth is, Oliver reveals, that Justice Kilbride did not set the three defendants free; he simply questioned the legality of procedural issues during their trials. But a campaign ad is not going to reveal that — they essentially hit where it hurts, and oftentimes it works. Judges have been known to rule more harshly to compensate for what's been said about them in an attack ad.

In a clip, Alicia Bannon, counsel for the Brennan Center For Justice, says:

There are some academic studies that have suggested that judges do change their behavior. For example, in election years, if you look at judges' sentencing decisions, judges tend to be harder on crime.

That's terrifying. Because you shouldn't be sitting in a prison going, "How did you get 15 months for public urination?" "Well, you know, it was October in an election year. I should have known what I was getting into."

And it's not like appointing judges is the perfect system. We can all name one that we don't like and it's usually Antonin Scalia — or, in his more palatable form, a bulldog dressed as Antonin Scalia.

Just as in politics, campaigns cost money, and that money has swaying power. In the case of the judiciary, judges have been going to lawyers to ask for funding.

Judges asking lawyers to give them campaign money is the definition of a conflict of interest. Think about it — giving money to judges wouldn't be acceptable in a state fair squash growing competition.

Sometimes judges will even track lawyers down after winning an election to intimidate them into giving more money, like when Democratic appeals court judge Jim Shaw contacted a Texas attorney, who had donated to his defeated opponent, with this message:

I trust that you will see your way clear to contribute to my campaign account in an amount reflective of the $2,000 contribution you made towards my defeat ;-) ...

Him shaking him down isn't even the part of the email I find most offensive; it's the wink emoticon. I guess we should all just be glad he stopped short of going full wink emoji.

And then there's the tactic of judges appealing to potential future defendants and essentially bribing for their support, like a Philadelphia traffic court judge candidate did at a biker rally, where he basically promised to turn a blind eye to their traffic violations.

Do all judges do this? Are there divorce judges going to IKEAs right now saying, "Look, I know some of you guys won't last, who's got $50 for me?"

But it gets even worse. Judges' campaigns are often also funded by businesses and special-interest groups. Multiple studies have suggested that this funding will sway a judge's ruling.

To be fair, Oliver points out, many judges don't like this system. Ohio Supreme Court Justice Paul Pfeifer said in 2006:

I never felt so much like a hooker down by the bus station in any race I've ever been in as I did in a judicial race. Which does explain Pfeifer's campaign slogan, "Justice for all. No kissing on the mouth, though. I have to save something for the man I fall in love with."

And now judicial PACs are getting involved and sponsoring judges' campaigns. These PACs get their donations from businesses like R.J. Reynolds tobacco company and John Deere, the tractor makers.

Look, when you have a system where judges are serenaded with banjos, shake down lawyers for money, compare themselves to prostitutes, and live in constant fear of tractors, you have a problem. Because faith in a strong, independent judiciary is essential for a civilized society. Without it, we're either settling disputes in Thunderdomes or via the Purge.

If we're going to keep electing judges, we may have to alter our idea of what justice is. In fact, at the very least, to be a bit more representative, we should tweak the blindfolded lady holding scales, to put a tip jar in her hand and give her a f*cking winking emoji for a face.