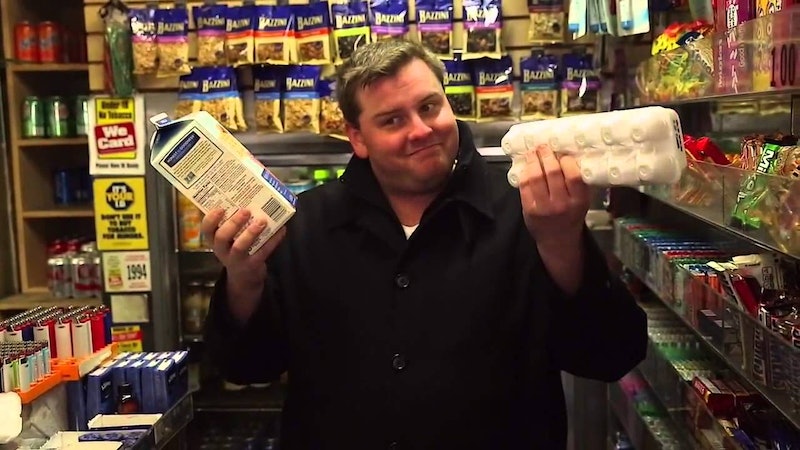 So here’s a new term to add to our dating lexicon: “Cuffing Season.” According to this handy video from Elite Daily, Cuffing Season (which they talk about like it's totally already a thing, although I've never heard of it) is the time of year when people who normally wouldn’t want to be in relationships find themselves wanting steady partners because it’s too cold to be on the prowl. The commentators in the video (“comedians, YouTubers and personalities” according to Elite Daily) imply that Cuffing Season is usually practiced by men. One guy says, “It’s a time period where guys get girlfriends who they have no intentions of keeping once the weather gets warmer.” Another explains, “Guys view cuffing season as a time period where they’re like, ‘I’m going to get a temporary girlfriend ‘cuz it’s way too cold to go hit on chicks.’” Charming, right?

Am I the only one that finds this video sort of offensive? I’m trying to put my finger on why this whole concept rubs me the wrong way. There’s nothing wrong with having short-term relationships or with wanting to play the field. I think the thing that’s bugging me is the way this video plays into long-running stereotypes about women always being desperate for commitment and domesticity, while men are perpetually doing everything they can to avoid it, succumbing to it only as a means of temporarily getting laid with minimal effort when outside forces deem The Player Life too impractical, like winter. Yes, there are a couple of women in the video, but the majority of the commentators are dudes who frame Cuffing Season specifically as something that men (players!) do to women, aka, clingy losers. They portray Cuffing Season girlfriends as desperate women longing for flowers and marriage and babies; as one guy says, “Guys view cuffing season as a way to get laid. Girls view cuffing season as a way to become the main girl.” Another commentator jokes, “Girls think Cuffing Season is like this magical time where all the boys come to their senses and take them out on dates and whatever,” the implication being that if a girl is stupid enough to assume that the guy who’s taking her out on dates and acting like he wants to be in a relationship actually wants to be in a relationship—well, a chick that dense deserves to get dumped, right?

So a key question now is: Should you be worried about your own winter relationship? Is your love real or is your partner only in it for the season? Take a good, long look at your guy. Can you imagine him using the term “Cuffing Season” in a serious way? If so, er…why are you with him again?