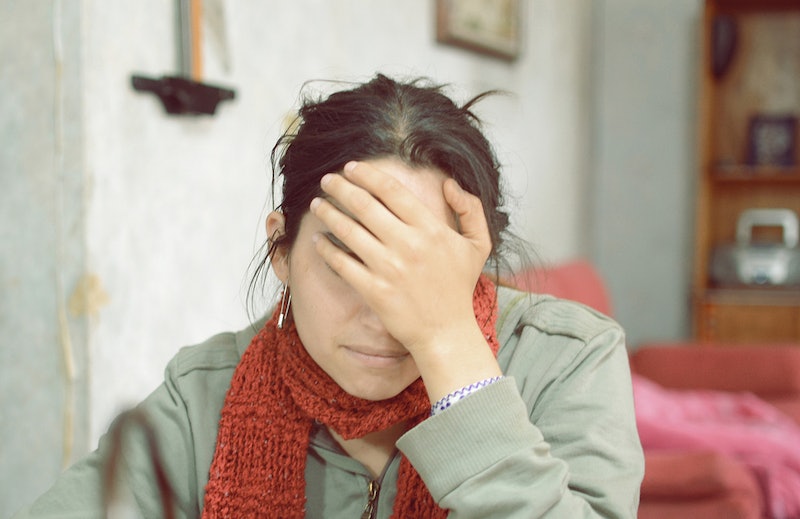 Conventional wisdom tells us that one should never discuss politics or religion at a dinner party. There are some topics that are simply too thorny to navigate in social situations; they are likely to make people feel uncomfortable and perhaps even attacked, and they have been rightly categorized under the banner “Don’t go here.” Can we please, please add “childbearing plans” to the list? Anyone who has recently gotten married (or has been in a relationship for long enough) can tell you that before the dust has even settled on the wedding, they’re getting questions from family members, friends, and near-strangers about what they’re future baby-making plans are. These questions are usually meant with every good intention, but that doesn’t make them pleasant, nor is it fun to awkwardly explain why you don’t really want to talk about the future of your womb right now. How is it that people don't understand how fundamentally intimate, private, and altogether not their business something like this is?

Little, seemingly harmless questions about kids can have a greater affect of people than you might expect: A 2013 study of British women found that, among kid-free women between the ages of 35 and 45, 60 percent felt stigmatized for not having children. Perhaps even more shocking is the fact that those women cited their own family and friends as their greatest sources of pressure to have children. So, everyone, I beg of you: Stop asking your married friends about having kids. Need convincing? Here are five reasons:

Your married friends may simply not want children. As Carolina A. Miranda notes in Time, people (particularly women) who are voluntarily childless often face accusations of selfishness or of simply not knowing their own minds. Your friends may have found that when they tell friends and family that they don’t want kids, their loved ones see it as a challenge and embark on a quest to change their decision. They’ll appreciate it if you just let them be.

2. They may not know if they want kids

Making the decision to have a child is a very complicated one. Your friends may have thought about the “Kid Question” a lot, but they might still be working out how they feel about it and what they want. Being forced to talk about it might make them feel more confused than ever.

3. They could be in conflict about it

Your friends could currently be in the midst of figuring out if they want to have kids or not—and they might not be in agreement about if or when that’s going to happen. Bringing up the kid question at an inopportune moment might put them both in a weird place, particularly if children are a sore spot in their marriage. Again, having kids is one of those things that, while it feels like (and effectively is) just a big occasions for the whole family, the decision about when and how to do it, or whether to do it at all, is so deeply personal and emotional, and should stay between two people. Once they tell you they're expecting? Go nuts! Ask all the questions! Talk about it endlessly! Until then, it's not your party, and it's not your battle.

4. They could be trying to conceive, without success

It’s entirely possible that your friends are trying to have children and are simply not having any luck. Infertility is an incredibly difficult issue to deal with, and women who struggle to conceive already face constant, painful reminders of their childlessness. You might throw out a casual “When are you thinking of having kids?” with only the friendliest intentions at heart, but you might unknowingly be prodding a wound that’s already hurting.

5. Your friend could be pregnant, but she’s not talking about it

Your friend might, in fact, already be pregnant. But if she hasn’t said anything to you about it, then you can bet that she’s keeping quiet for a reason. Many couples wait until after the first trimester has passed (when the chance of miscarriage decreases dramatically) before telling people the good news. Let your friends share in their own time.

In short, please listen to the wise sages Salt N’ Pepa: It’s none of your business. If your friends want to talk about childbearing plans/how they’re feeling about kids/their doubts/their good news, they’ll tell you. If they bring up the topic, by all means, discuss it with them at length. But until then, leave it alone. Your friends will thank you.