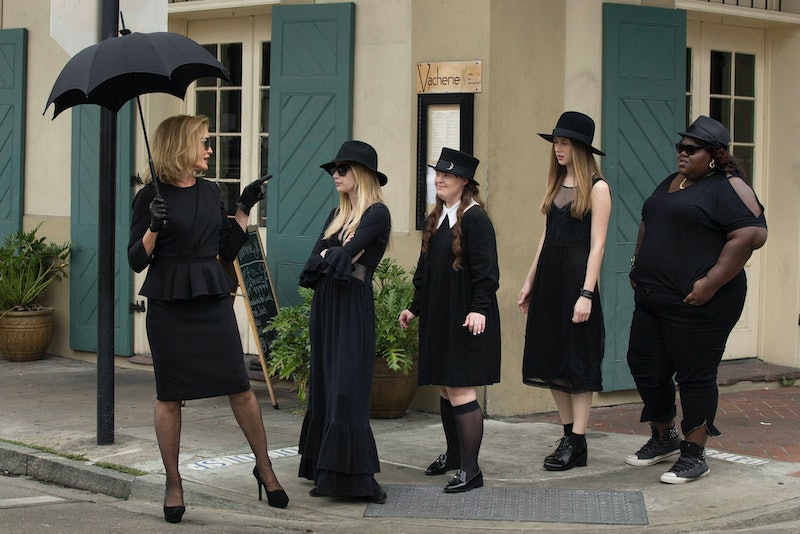 "It's the thing of where an old lady smears her face with blood before torturing slave minotaur men while witches sex-kill the bartenders and Jessica Lange is there doing coke all set to 'In-A-Gadda-Da-Vida'."

No, this isn't New York's hottest new nightclub! It's American Horror Story: Coven, the latest iteration of the absolutely batshit "anthology" horror show cooked up by Glee's Ryan Murphy and Brad Falchuk. You'd be forgiven, though, for thinking what you just read is some sort of Stefon fever dream. I mean not ALL of that stuff could happen in the span of one hour-long pilot…could it?

Coven, as you'd probably guess from title alone, is all about WITCHES. Specifically contemporary, teenage witches enrolled at what's basically Xavier's School for Gifted Youngsters, but with a stronger emphasis on voodoo and crisp verbal putdowns. "You are a sloppy little witch bitch!" Jokes about houses falling on the girls. That sort of thing!

These teen witches have all enrolled -- or been forced to attend -- for the danger they pose to mainstream society. Dangers like boning sexual partners to death, seeing the future, Carrie-style telekinesis, human voodoo doll abilities. Each of them is a TICKING TIME BOMB of hormonal stress, so naturally they're sent to the Big Easy and looked after by Jessica Lange.

Did I mention that I already love this show? Actually from the first scene, in which Kathy Bates smears blood all over her face to stay young, I knew this was a series I could really get behind. Then Tessa Farmiga's escorted to Miss Robichaux's School by a squad of Pitbull (the rapper)-looking albino guys? SEASON PASS.

Some things I'm guessing we can look forward to in the season ahead:

Thank you, AHS, for saving my Wednesdays from the afraid-to-get-its-hands-dirty Nashville. You, on the other hand? STAY DIRTY.

More like this
Michael & Kathleen Peterson’s House From ‘The Staircase’ Has New Owners
By Kadin Burnett and Kayla Blanton
What’s New On Netflix: A Victoria Justice Rom-Com & The Return Of David Letterman
By Arya Roshanian
Doctor Who’s New Star Is Already Huge On TikTok
By Maxine Harrison
How Ncuti Gatwa's 'Doctor Who' Casting Impacts His 'Sex Education' Future
By Nola Ojomu
Get Even More From Bustle — Sign Up For The Newsletter