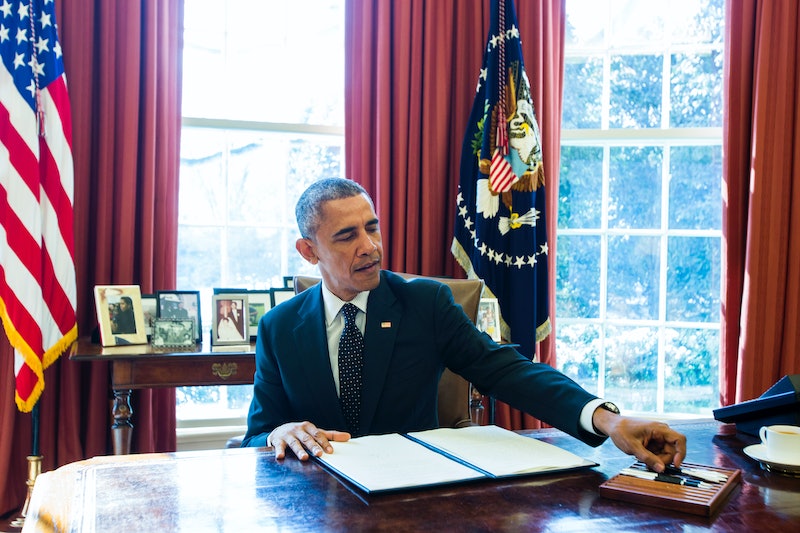 For most Americans, the same iconic images probably come to mind when thinking of national monuments — the Washington Monument, Mount Rushmore, the Grand Canyon — but the U.S. actually has more than 100 protected areas. Last week President Obama added three new national monument sites to the roster, bringing the total number of national monuments he has designated to 16. So, where are all these monuments we've never heard of?

Most of them are beautiful natural areas managed by the National Parks Service, but some are sites of historical significance. The Antiquities Act of 1906 allows presidents to grant federal protection to specific areas, and they've been taking advantage of the power since Teddy Roosevelt's time in office.

Obama's newest additions are Chicago's Pullman Park District, Colorado's Browns Canyon, and the site of the World War II Honouliuli Internment Camp. The Pullman Park District was integral in labor and civil rights organizing and is the first protected area in the president's hometown. Obama has now designated 16 national monuments covering the U.S. from Virginia to Hawaii. After announcing the new protected sites Feb. 19, he tweeted, "I've used my authority to set aside more public lands than & waters than any President in history."

Here's a list of the other 13 national monuments designated by Obama:

Along with the new national monuments, Obama also announced the "Every Kid in a Park" initiative, which provides all fourth grade students and their families free admission to all National Parks and other federal lands and waters for a year. The program aims to get kids outdoors in the lead-up to the National Parks Service's 100th birthday in 2016, and to help, the National Parks Foundation is reinstating a program that provides free transportation to parks for underfunded schools. In his statement announcing the initiative, Obama says:

We want every fourth-grader to have the experience of getting out and discovering America. We want them to see the outside of a classroom too; see all the places that make America great. Put down the smartphone for a second. Put away the video games. Breathe in some fresh air and see this incredible bounty that’s been given to us.

Both Obamas are making it a point to encourage Americans to get outdoors, with Michelle's "Let's Move!" campaign promoting exercising outside. Do the Obamas think we watch too much TV or something? Regardless, it's nice to know that parts of our natural landscape are being preserved and might still be around in another 100 years.