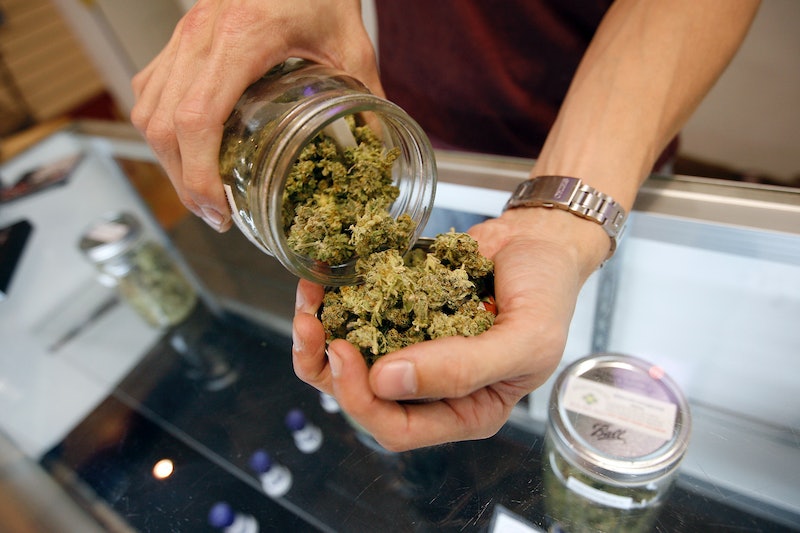 In a study published in Scientific Reports, researchers have found that marijuana isn’t as dangerous as society would have you believe and that we need to be paying a lot more attention to the dangers of alcohol. The study, conducted by Dirk W. Lachenmeier and Jürgen Rehm, compared the risks of drugs, including alcohol, tobacco, marijuana, methamphetamine, and cocaine, and found marijuana to have a low risk, while alcohol had the highest risk.

The risks were measured based on the drugs' margin of exposure (MOE), “ratio between toxicological threshold and estimated human intake.” When it came to individual based MOE, alcohol came out to have the lowest, followed by cocaine and heroin, meaning that those three have the highest risk of death. Those three had a MOE that was less than 10 while THC (the chemical found in marijuana) fell to the very end of the scale, with the highest MOE (more than 100), which therefore means it has the lowest risk out of the drugs tested.

That’s not to say that marijuana is without risks, because marijuana definitely comes with risks. But as Christopher Ingraham of The Washington Post points out, everything we consume comes with risks, from sugar to salt. There’s nothing really surprising about alcohol and marijuana having risks with them, it’s our understanding of the severity and likelihood of those risks that the study is challenging.

In fact, the conclusions about the risks of marijuana aren't too new, since they support the findings of the 1993 study on the margin of safety between substances. But will this study have an effect on the current understanding of drug safety and risks? As the U.S. moves closer to accepting and legalizing marijuana, this study will most likely help in that case, but when it comes to alcohol, will there be any sort of change? In both the results for individual based MOE and population based MOE, alcohol comes out as having the highest risk. Alcohol was the only drug that had a MOE of less than 10, followed by followed by cigarettes, which had less than 100.

As the researchers themselves concluded, the risks of marijuana have been heavily overestimated while the risks of alcohol have been underestimated. They were referring to government and regulations in Europe, but the same can be said for the U.S. As marijuana gets more popular and is legalized around the country, maybe it’s the time for there to be more discussion about the reality of the risks of other drugs, too.