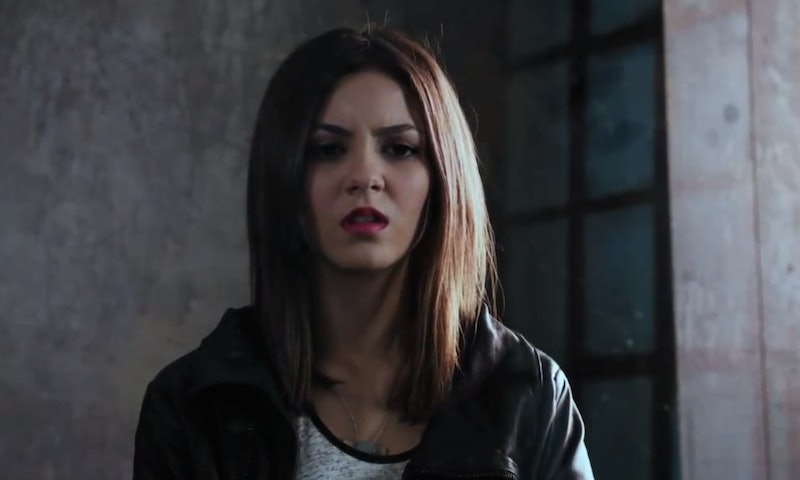 Just when you thought the Flirtual Killer was capable of good things, he (or she!) proves there's no such thing as a noble and caring serial killer (you stay out of this Dexter Morgan!). The seventh episode of Eye Candy , titled "SOS," did not initially involve the Flirtual Killer, it was instead a case about Jake's friend Nick who woke up from a night with his girlfriend in an Airbnb-style rental apartment — called Virtual Slumber — with deep gashes all down his back. The reasonably freaked out guy went to Jake and Lindy to try and find out who did this to him via any potential hacking. But what Lindy found led to a rabbit hole and a word: Babylon, that could help Lindy and the Cyber Crimes Unit get a hold on the Flirtual Killer and (bonus!) Sarah's kidnapper.

The Virtual Slumber case, initially began and seemed to get solved when Nick was revealed to be a big cheater and his girlfriend took revenge on him by paying someone to hurt him and give her an alibi by drugging and temporarily paralyzing her as she slept next to him. But during investigation of the case, Lindy signed up for Virtual Slumber and later realized she had also been paid for to have something mysterious done to her. Obviously it was by the Flirtual killer.

Tommy tagged along on a sting where things, of course, went horribly wrong. Lindy was kidnapped and almost branded with an X, in honor of the Flirtual killer considering her a "perfect 10" but wanting to scare her as she had "broken his heart" by kissing Jake earlier in the episode. However, the killer's associate Michael Doll told Tommy, after he was captured, that he had been paid through a program called Babylon. So what exactly is Babylon?

If it's an online program, maybe it could be possible for the Cyber Crimes Unit, Lindy and George to hack in and try and find some lead on who the Flirtual Killer is if he paid Michael Doll via Babylon. Obviously the Flirtual killer is too smart for this hacking job to be so easy, but at least it's a start.

Babylon is obviously also closely associated with the voyeur website where the Flirtual killer found Michael in the first place, The Dollhouse. And according to a recent promo for the last three episodes of Eye Candy's first season, it might be a site that finally gives Lindy her first clue in three years about her sister Sarah's kidnapping and current whereabouts.

Clearly, the program is the first real lead into discovering the deep, dark, seedy underworld of the creepiest people in New York, the people like the Flirtual Killer who find entertainment and desire in watching and/or causing pain and misery. Babylon could be another step into darkness for the show in general, but it could also simultaneously be a step in the right direction if it can shed light on the Flirtual killer and where Lindy might find Sarah. But the more they dig, the more likely there will be more collateral damage and dangerous scenarios for all of our favorite characters.

More like this
Don Crowder Successfully Defended Candy Montgomery, But His Story Ended In Tragedy
By Gretchen Smail
UK Viewers Will Have To Wait To See Jessica Biel’s Killer Housewife Series
By Rachel Mantock
What Does Michael Peterson’s Family Think Of 'The Staircase'?
By Arya Roshanian
Everything To Know About ‘The Handmaid’s Tale’ Season 5
By Amanda Whiting
Get Even More From Bustle — Sign Up For The Newsletter