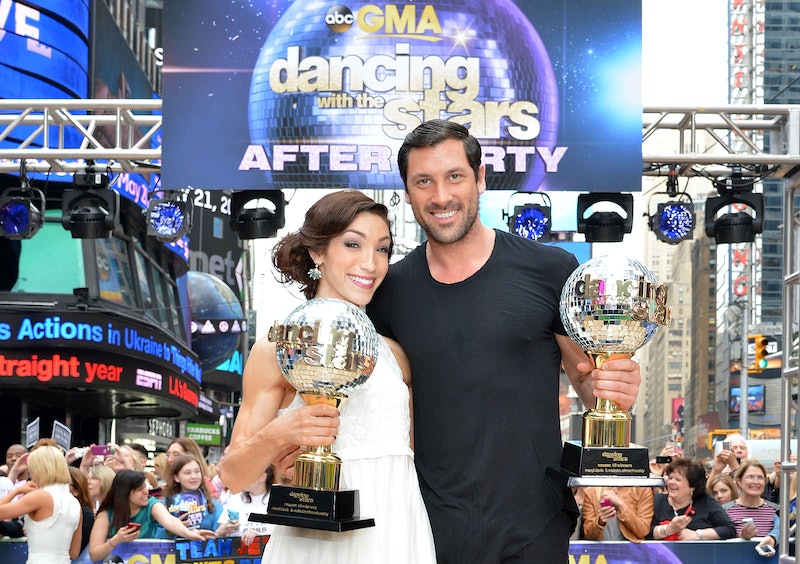 Is there any couple more symbolic of Dancing With The Stars than Maks and Meryl? The two captured my heart during Season 18, and, although we're two seasons beyond them at this point, I'm still always on the look out for a new substitute couple to kill me with their chemistry. So, on Tuesday morning, when the cast of Dancing With The Stars Season 20 was announced on Good Morning America, I was excited to hear who Val Chmerkovskiy would be dancing with. Now that Maks has retired, Val is the one fulfilling all of your Chmerkovskiy teddy bear needs. Well, Val's partner is Rumer Willis, and that's not the only amazing dancer-pro pair that Season 20 of DWTS has in store for us.

There were a lot of surprising celebrity names on the list for the upcoming anniversary season. Michael Sam was more or less confirmed to be participating in this season of Dancing With The Stars in the days leading up to the announcement, but there is a surprising name in The Hunger Games star Willow Shields. (The 14 year old portrays Katniss' younger sister Primrose Everdeen, for those of you who aren't up on your THG trivia.) She'll be partnered up with Mark Ballas for the season, and surely I can't be the only one looking forward to that. May the odds be ever in her favor.

Of course, these names aren't the only pleasant surprises that Season 20 has in store for fans. According to GMA, Derek Hough is also back for the show along with Olympic gold medalist Nastia Liukin. Sure, they are correct in feeling that it would be just plain wrong to do an anniversary season without Hough, but I'll just be over there in the corner believing that it's wrong of them to do an anniversary season without Maks and Meryl. Fingers crossed that the DWTS family has some kind of surprise with them coming up for us. Or is that just my own wishful thinking?

Check out the other celebrity-pro pairings below and get ready for what I'm sure will be the greatest season yet, starting on March 16.