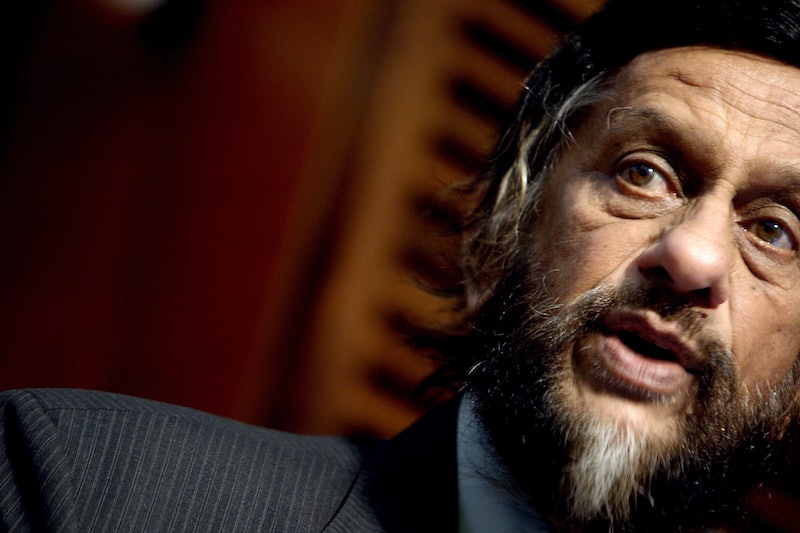 Amid the struggle to push climate change to the forefront of the international community's awareness before a crucial climate meeting at the end of this year in Paris, Rajendra K. Pachauri, the UN climate panel chief resigned pending sexual harassment investigations currently underway in India. Pachauri, chair of the UN’s Intergovernmental Panel on Climate Change (IPCC), stepped down from his post on Tuesday morning in a letter to UN Secretary-General Ban Ki-moon. In his resignation letter, Pachauri wrote:

The IPCC needs strong leadership and dedication of time and full attention by the chair in the immediate future, which under the current circumstances I am unable to provide.

The 2007 Nobel Peace Prize Laureate is currently being investigated by Indian police for claims of sexual harassment made by a 29-year-old employee at the research firm The Energy and Resources Institute (TERI) in Delhi, where he is director-general. The employee alleged that Pachauri made repeated inappropriate advances towards her, both physically and through unsolicited emails, text messages, and WhatsApp messages.

The 74-year-old denied all charges, and his lawyers have claimed in court that Pachauri's emails, cell phone, and WhatsApp messages were hacked, and that the messages were sent by criminals in an attempt to sully his reputation. Pachauri's spokesman said:

[He] is committed to provide all assistance and cooperation to the authorities in their ongoing investigations.

Shocking as his resignation might be, Pachauri's leave likely won't inflict lasting damage on the IPCC, as he was due to retire in October, and the organization had already lined up potential successors. But many had called for his resignation on the basis that the charges on its highest authority could have been used to discredit the IPCC. Bob Ward, policy director at the Grantham Research Institute on Climate Change at the London School of Economics, told The Guardian:

It is understandable that Dr. Pachauri has resigned from his post while he is facing allegations against him in India. There will no doubt be some climate change "sceptics" who seek to use Dr. Pachauri’s resignation as an opportunity to attack the IPCC, [but its most recent report] is the most comprehensive and authoritative assessment of the causes and potential consequences of climate change that we have ever had, and that remains true with or without Dr. Pachauri as chair.

The IPCC confirmed in a statement on Tuesday that Vice-Chair Ismail El Gizouli will be designated acting IPCC Chair, ahead of its 41st session.

Widely considered the most important evaluation of global warming yet, the IPCC's most recent climate change report, published in November, stated that climate change would cause "severe, widespread and irreversible impacts” unless carbon emissions are drastically cut. Lauded by Secretary-General Ban as "historic," the study came at a critical timing, just a year away from the pivotal UN climate change meeting in Paris in December aimed at a universally-binding consensus on climate change.