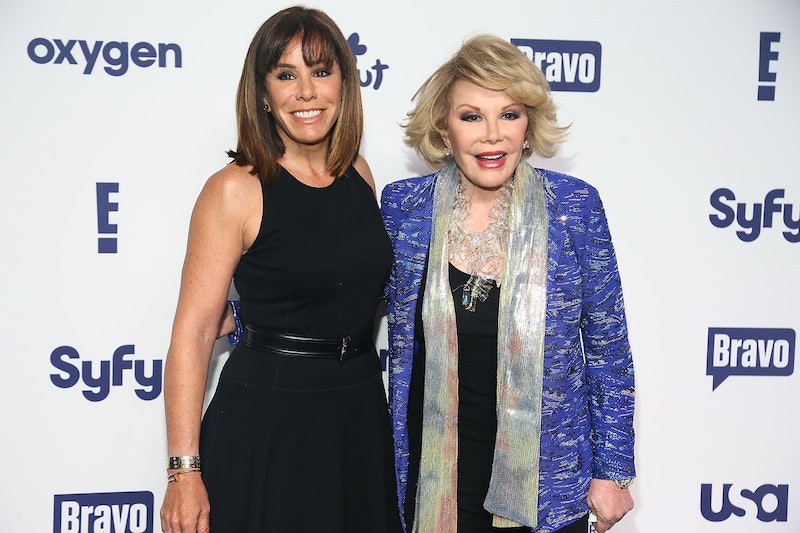 Even if you weren't the biggest Joan Rivers fan, it's hard not to respected her work and the impact she had on entertainment culture while being a strong and outspoken woman. You can say what you wish about her, but you can't deny that she had an unmistakable, and now, legendary, presence on award show red carpets throughout the years, so it was a big shock to many of her fans when she was not mentioned during the Oscars "In Memoriam" segment. In the wake of the social media outrage, her daughter Melissa Rivers reacted to the Joan Rivers Oscars snub on her mother's Facebook page. She shared,

It would have been nice, especially considering the impact she had on the awards season, but Cooper and I have been overwhelmed with support and love over my mom's passing and we choose to focus on that.

Bravo, Melissa. In the midst of all this media attention, Melissa has chosen to take the high road and kept things very positive with her statement

Whether or not she foresaw the snub on Sunday night, Melissa took it upon herself to release a video tribute during E!'s red carpet pre-show that celebrated her mother's greatest and most outspoken red carpet moments that made her the indisputable queen of award shows. Joan was never intimidated by celebrities and as Melissa says in the video, "My mom asked questions that nobody else dared to ask."

The day after the Oscars, the Academy commented about the snub in statement saying, "Joan Rivers is among the many worthy artists and filmmakers we were unfortunately unable to feature in the In Memoriam segment of this year’s Oscar show. She is, however, included in our In Memoriam gallery on Oscar.com."

While we may never know the exact reason Joan was left out, I have a feeling that Melissa is taking this in stride because she knows how her mother would react in the face of this snub, and many fans agree that she would absolutely revel in it, because she was Joan Rivers and that's why we loved her.

Regardless, awards season will be just a little bit tamer from now on. Joan Rivers was truly one a kind and it will be a long time before we have voice as empowering, controversial, and beloved as hers on the red carpet.

More like this
Sandra Bullock, Girlboss Extraordinaire
By Matt Harkins & Viviana Olen
Selena Gomez Reacts To TikTok Users Who Say She Shaded Hailey Bieber
By Grace Wehniainen
Laura Dern Said “Cultural Awareness” Made Her Rethink This 'Jurassic Park' Fact
By Grace Wehniainen
Colin Firth Revealed His Favourite Mr. Darcy (& No, It's Not Himself)
By Sophie McEvoy
Get Even More From Bustle — Sign Up For The Newsletter