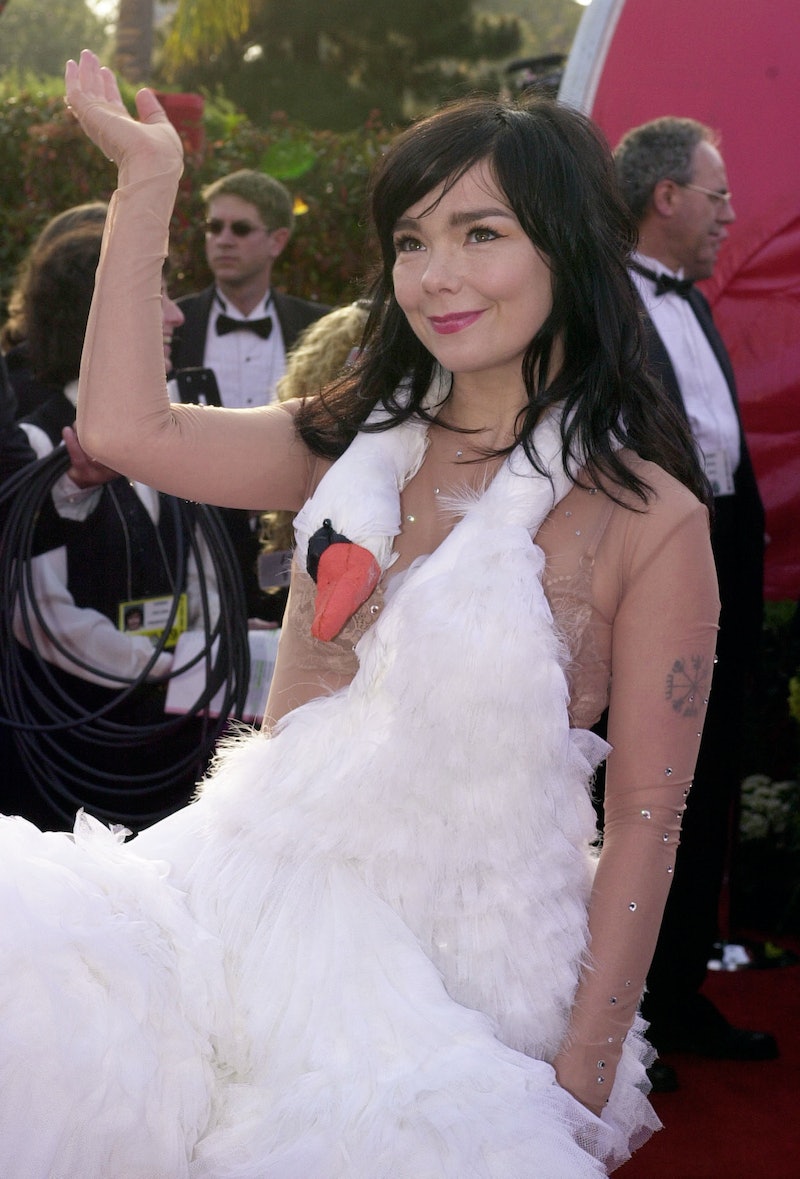 The Museum of Modern Art is putting on a retrospective of Bjork's work, starting on March 8th. The exhibit will cover her two decades of work and eight studio albums and dozens of music videos, as well as premiere a brand new sound and video installation, commissioned by MoMA. The new immersive work, called "Black Lake," is based on a song from her newest album Vulnicura.

Although this installation from Bjork and her team is sure to be striking, I'm most excited for the clothes, since the retrospective will also feature objects and outfits from some of Bjork's most memorable moments. Klaus Biesenbach, MoMA's chief curator-at-large who you probably recognize from his appearance in the documentary about Marina Abramović's MoMA retrospective The Artist Is Present (and friend to James Franco), has been posting sneak peeks on his Instagram of some of the clothing that will be featured, and every item he's shown so far has an elaborate story behind it, and the craftsmanship is always flawless.

Bjork is an exceptional artist because she not only has a crystal clear vision of what her look should be, but she also wears it with a level of confidence and assurance that's unmatched. Her attitude and total dedication to a look is what helps her pull off her avant garde style, and what makes me so excited to see her work in person. So below, in no particular order, are 11 of Bjork's most iconic outfits that I hope to see in her upcoming MoMA retrospective.

This rainbow pom-pom headdress, paired with what looks like a mylar, rose pink dress and cape, is a look from Bjork's 2007-8 tour for Volta, her first after a four year hiatus. Soren Bach designed the fantastical hat that definitely showed to the world that even after her extended break, her fashion sense hadn't toned down at all.

Bjork wore this jacket on the cover of her 1995 album Post. Designed by Hussein Chalayan, this blazer is made of Tyvex-coated paper, like an actual airmail envelope. According to Bisenbach's Instagram, the airmail jacket has already made it to MoMA for inclusion in the retrospective, so now the only question is how it'll be presented.

Before Bjork was Bjork, she was the lead singer in the Sugarcubes, an Icelandic alt-rock band that was active between 1986 and 1992, and this period of Bjork's career is one I hope is also celebrated at MoMA. Her short hair is disheveled in a perfect grunge rock kind of way. Although her outfits in this video for their biggest American hit "Birthday" are overwhelmingly simple with lots of oversized, silk blouses, you do get a glimpse of the Bjork we know and love today, twirling around in black and white with what seems to be the carcass of a raven.

So a hairstyle isn't an outfit, but after the Sugarcubes broke up and Bjork launched her own solo career in 1993, the double bun became Bjork's signature look. It's an example of all roads leading to Bjork, since the classic 1990s hair do has been replicated by starlets ranging from Gwen Stefani to Miley Cyrus. But at the end of the day, nothing beats the original. She might look a little bit like Princess Leia, but when Bjork shows up with those buns, it feels like an old friend is giving you a sartorial hug.

This cover of a 1951 American standard is still Bjork's biggest hit. The orange, polyester, shiny short-sleeved dress she wears in the Spike Jonze-directed music video is perhaps one of her most simple costumes ever, which is also what makes it so iconic and unusual for her. Plus, those blunt bangs are on point.

Biophilia is Bjork's eighth studio album and was released in 2011, after the Icelandic financial crash. The dress on the album's cover, and featured in this video for "Moon," is created by Dutch designer Iris van Herpen. As you can see from the video, the belt is actually a working harp, designed by the New York-based threeASFOUR. The wig is oversized, yet somehow still proportional to the rest of the ostentatious outfit. Lucky for us, according to MoMA's press release, this is one outfit we can expect to see at the museum.

It's not a stretch to argue that Biophilia is Bjork's most complex, conceptual album yet. I mean, not only was her belt a harp, but she created these pendulum harps for her tour and all these different apps for your iPad. The costume choices were equally daring, even by Bjork standards, like this look, where Bjork paired another Iris van Herpen dress with a spiky, yet delicate, headpiece by Maiko Takeda.

This is a dress made entirely of bells that is shaped like a larger bell. If that's not the most meta-costume ever, then I don't know what is. The whole thing is only made more magnificant when you learn that the architectural masterpiece was made by Alexander McQueen. This was only one in a long line of collaborations between the two artists; McQueen also designed the geisha-inspired dress Bjork wore on the iconic cover of her 1997 album Homogenic , but this bell dress is a more politically correct and, in my opinion, structurally impressive. (Please also note the reappearance of the double buns.)

Another McQueen creation, this pearl dress is featured in Bjork's 2001 "Pagan Poetry" video. The clip is totally NSFW, so click here with caution, but the outfit is incredible because the pearls are literally sewn into her skin. Like, the strands of pearls are connected to her nipples with hoops. It's absolutely transcendent, and shows how far Bjork is willing to go in the name of her music.

Let us never forget the time that Bjork met Prince Charles, heir apparent to the British throne, with her face half-covered in crystals thereby proving that she's really the royal one. She rocked those face crystals with confidence and absolute commitment to an unconventional look.

It's not a list of Bjork's most iconic outfits without that swan dress she wore to the Oscars in 2001, and there's really not much more you can say about it. You'll definitely be seeing it at MoMA's retrospective, after some much-needed TLC.

More like this
The Louis Vuitton Cruise 2023 Show Was Full Of Chic Celebs
By Allie Fasanella
Doja Cat Wore Surrealist-Inspired Schiaparelli To The BBMAs
By Dominique Norman
The “Ugly” Trends Bella Hadid Makes Look Cool
By Allie Fasanella
14 Spicy Bralette Outfits For Vaxed Girl Summer, Round 2
By Avery Matera
Get Even More From Bustle — Sign Up For The Newsletter