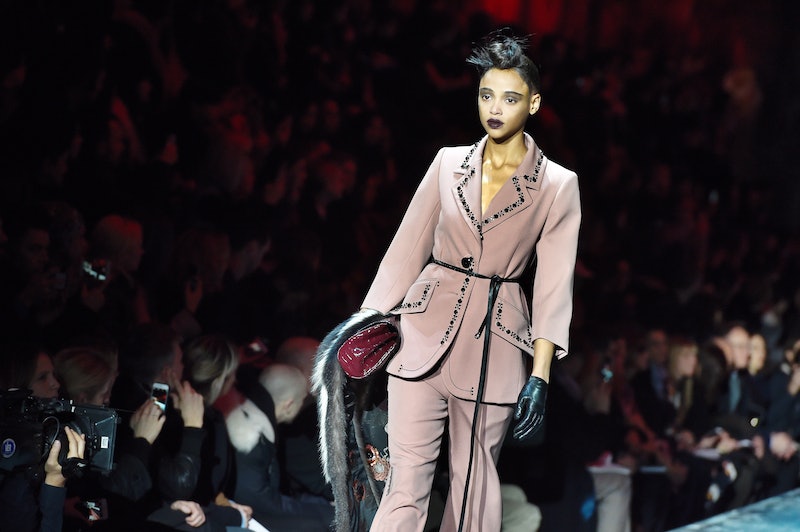 Good things come in threes, so the adage goes — but at Fashion Week, the rule of three can only mean a new trend on the horizon. Those wary of daring cosmetics may wish to strap on their sartorial seat belts, because it appears that black lipstick is a burgeoning trend for Fall 2015. On display at Marc Jacobs, Giles and Ashley Williams, the black lip was interpreted in several different fashions but with only one intent: To dare audiences to stand apart from the masses in 2015.

Admittedly, black lipstick was never a completely verboten cosmetic choice, but the Fashion Week runways were saturated with models sporting a slash of noir lipstick and little other makeup. At New York Fashion Week, Marc Jacobs' nearly-ebony lips reigned and as any closet fashion connoisseur knows, what begins on Marc Jacobs' runway often dictates trends for the rest of the season. Created by the lionized makeup guru Francois Nars, the lip was constructed using the rich, heavily pigmented purple Train Bleu Velvet Matte Lip Pencil, which appeared nearly black under the runway's spotlights. In conjunction with the designer's gothic statement designs, the effect was one of a confident woman who knows exactly how much authority she carries over her audience.

Following close on the heels of Marc Jacobs' show was that of designer Giles Deacon, whose notoriously rakish designs were given more eccentricity with plumped, stained black lips. Fittingly, the startling look was created with stage-appropriate MAC cosmetics using Pro Lip Mix in Black and Ebony Pencil to produce a slightly aqueous, stamped-on appearance.

Last but certainly not least was the avant-garde Ashley Williams, whose collection itself bore a resemblance to vintage Jeremy Scott and Diane von Furstenberg thanks to a preponderance of colored fur and patterns. However, the runway's distinctly emo-meets-punk vibe was most evident in the designer's use of glossy black lips on each of her models.

Whether you adore the idea of black lipstick or think it harkens back to your middle school heavy metal phase, it is safe to say that deeply hued lips aren't a passing fad in the fashion world. Perhaps it's time to dip a toe into the trend with a swipe of translucent black lipgloss, or simply accept that the rebellious lip is back whether you approve or not.