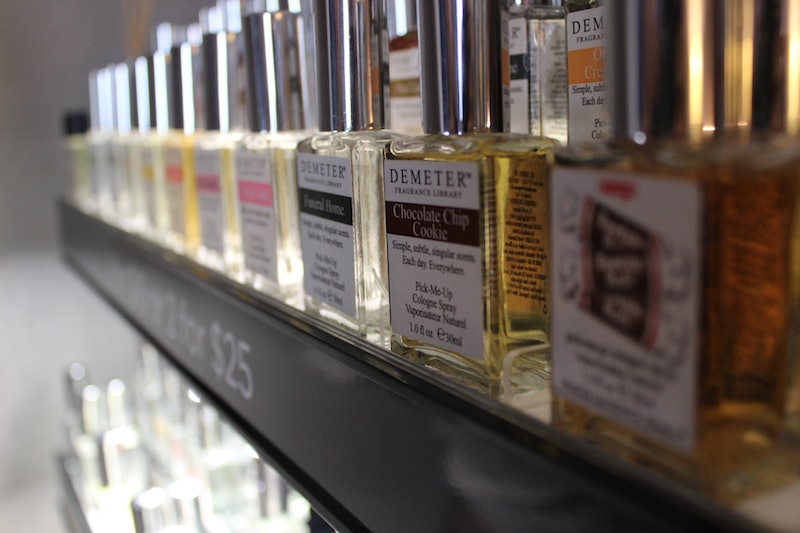 For the perfume-obsessed like myself, there's are a long list of things we'd love to smell like — a Parisian rose garden (Roses de Chloé), sweet caramel (Prada's Candy), and juicy, zesty blood orange (Nest's Paradise), just to name a few. However, most people I know keep the heads of infants off of that list. Demeter, a niche fragrance company, apparently didn't get that memo, as they are set to unveil their newest scent, Baby's Head, next month.

If you've ever seen their imposing display in Duane Reade, then you probably already have an inkling that Demeter isn't known for typical, run-of-the-mill floral scents. With perfumes like Waffles, Dirt, and Holy Water as part of their extensive fragrance library, Demeter is all about incorporating the weird and everyday into their scents. Want to smell like a Pizza or like Hello Kitty? Demeter has got you covered! Most are fun, cute, or kitchsy, but their newest perfume is setting the creep factor through the roof.

Baby's Head is a powdery, floral fragrance designed to mimic the scent of a newborn's skull. Yup. That's a thing. The editors over at Allure performed a blind sniff test and lo-and-behold, it truly does smell like babies. "It smells like a plastic baby doll. Like a baby. But plastic," noted one. "It smells like a baby. It sort of smells like a baby's head, but that's too weird. Is that what it is?" guessed another. So I guess congrats on the achievement, Demeter?

I would now like to take a moment to point out the difference between liking the smell of something and wanting to actually smell like it. I know tons of people who like the smell of gasoline but who don't go dousing themselves in the stuff. And let's not even get into the creepy implications of your boyfriend catching a sniff of your newest perfume and saying that you smell like an infant. I'd rather not go there.

If this is the first that-can't-be-real perfume you've seen, let me tell you that there's a whole world out there of unbelievable scents and some are just plain weird. You may not know anyone who goes around smelling like a pepperoni pizza, but just remember that somewhere out there in the world, someone actually wants to smell like these six perfumes.

Created to evoke the scents of the circus, like cotton candy, sawdust, and elephant crap.

Sweat, blood, and sperm. Yup, just what every gal wants to smell like when meeting her boyfriend's parents.

3. CB I Hate Perfume's In The Library

I love that musky "old book" smell as much as the next bibliophile. But I'd rather not walk around smelling like mildew and leather bindings.

Mmm... Smells like "conservative values, love of country, and a strong family unit."

Apparently, a pirate smells like leather, smoke, and gunpowder. Just the scent I want to wear during family dinners!