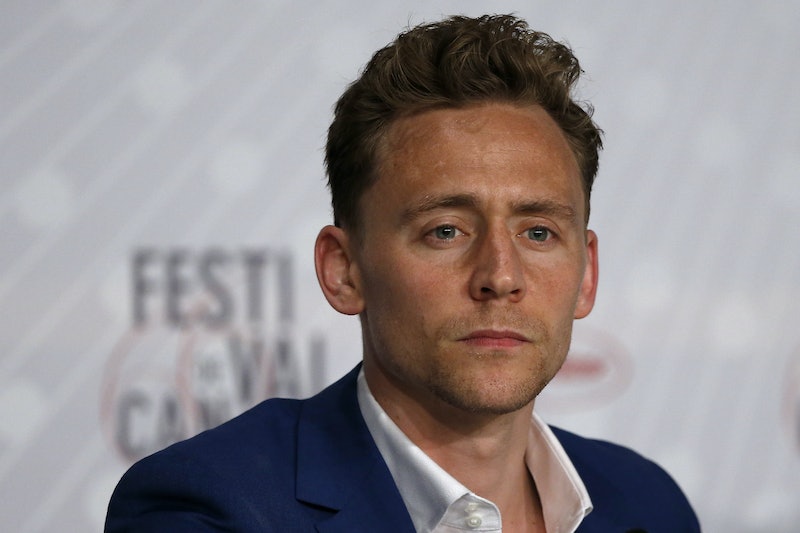 While everyone in America celebrated the Oscars on Sunday, the film industry's sweetheart Tom Hiddleston was doing a Q&A at the Nuffield Theatre in Southampton, England. The small event was for members of the theater, (who can congratulate themselves on scoring quite a few fangirls as patrons, now) and was dedicated to hearing Hiddleston's thoughts on acting, theater, and the arts in general.

I've always known Hiddleston loved all aspects of acting, but this Q&A really highlighted that enthusiasm. Although the event was closed to cameras or recording devices, thanks to several Hiddlestoners who attended, fans can read re-caps of the questions asked and what Hiddleston had to say about the arts. (And even without video of the event, all this is right in line with his general attitude towards taking acting seriously.) "Tom is seriously passionate [about] acting," one attendee told me.

In fact, Hiddleston divulged that he initially joined the industry because it had essentially overtaken his life. "I slowly realized it had begun to take up all of my time," he told the crowd. Although he focused on acting for the most part, Hiddleston also threw some feminism in there, referencing Emma Watson's HeForShe campaign and reportedly saying, "Women and men should be allowed to be whoever they are without restriction."

And as if that wasn't wonderful enough, according to fans who were there, here is exactly how dedicated to the theater arts Hiddleston is.

He Doesn't Drink at the Theater

According to Tumblr user l0kilee, who wrote an in-depth recap of the event, Hiddleston doesn’t get why some playhouses serve alcohol. "I never understood wanting to be in a lesser state of awareness in a theatre," he said.

Truth is the Lifeblood of Acting

Hiddleston kept coming back to this notion of truth in performance, and it was clear that it's important to him to be honest in his work. "Acting is being truthful in imaginary circumstances," he said, recounting some advice he learned at the Royal Academy Of Dramatic Art (RADA). L0kilee said he believes that it's the honesty of theater that has kept the industry alive even during the lowest points of the recession.

He Wants Acting Education to Be More Affordable

Hiddleston revealed that he spent £1,100 a year to go to Cambridge and RADA for his education, whereas tuition is now about £9,000 for the two schools. He thinks it's a tragedy that more people can't afford to follow that passion because of rising tuition.

He Finds a Part of Himself in Every Character

L0kilee asked Hiddleston if it was "easier to play roles similar to your own character or further removed?" The actor replied that he likes his roles to reflect an aspect of himself so he can better connect to the character. The Tumblr user wrote that Hiddleston "likes to think his kindness shines through Captain Nichols, his playfulness through Loki and he believes he is very hard on himself, much like his Coriolanus."

L0kilee revealed that Hiddleston found it hard to identify with Hank Williams for I Saw the Light, because Hiddleston couldn't relate to Williams' alcoholism. "I love my life too much," Hiddleston said of why it was difficult to understand putting himself in that situation.

He's Not a Method Actor

Hiddleston says he doesn't subscribe to that idea because director feedback is too important for him to stay completely in character. But Tumblr user HiddleMemes says Hiddleston admitted he sometimes stays in his character's voice between takes.

He Sees the Arts as Revolutionary

He Puts Everything He Has Into His Work

Tumblr user technicolour66 said that Hiddleston admitted he has trouble finding a work/life balance because his work means so much to him. The blogger wrote, "He feels if he’s taken on a job, he should always give it his best. He doesn’t want to look back on something he has done and think that he could’ve done better."

The good news for Hiddleston is that he always puts together an amazing performance. I'm constantly amazed by his efforts. It's not surprising to hear how much he loves acting, because he brings an honesty to it that not every actor has managed to achieve. L0kilee summed things up nicely by saying, "As an actress (aspiring and resting) I found this truly inspirational and I think he is an incredible man with a lot to share."

I know I can't wait to see how his career continues to develop as he grows as an actor. It's truthfully so inspiring to watch.