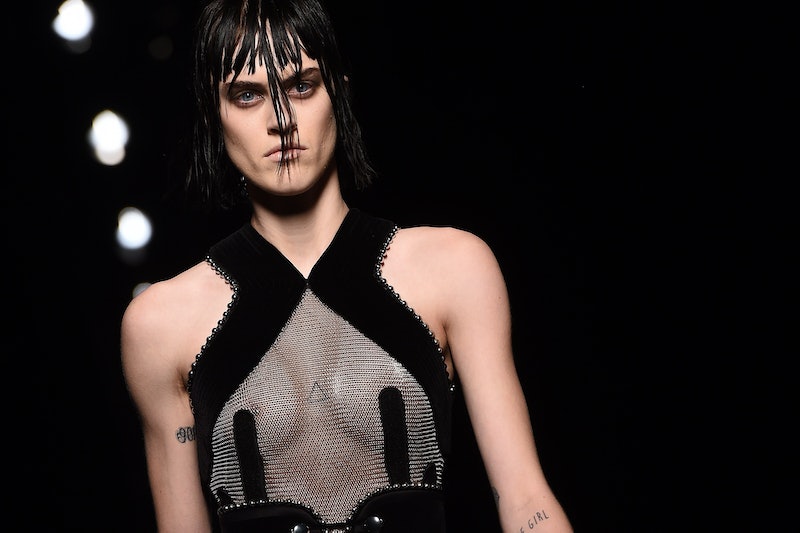 The term "goth" comes with a host of negative connotations, but nevertheless is a resurgent force in fashion. Fall 2015 Fashion Week may as well have been labeled an ode to ebony, as black supplanted nearly every other color on more than several designer runways, heralding the return of more moody styles. Marsala may be Pantone's Color Of The Year, but true to form, a number of young, subversive designers bucked the trend and chose an edgier route entirely.

Though the goth trend cant' be pinpointed to one designer's aesthetic choice, it is most evident in the collections of brands that notoriously create more colorful, cheerful wares. Case in point, designer Nanette Lepore took an unexpected turn with her Fall 2015 collection, showcasing black satin midi skirts, transparent black lace blouses, and baroque suits paired with graphic tees. When combined with statement orchid lips and haphazard side bangs, Lepore's collection spoke of a nouveau goth who isn't afraid to wear peach but will offset the shade with chunky black platforms and mussed locks.

Next on the gothic docket is one Alexander Wang, whose collection was anything but demure and submissive. During a pre-show discussion with Women's Wear Daily, the designer explained that the predominantly dark palette was ultimately spurred by comments from the stores that stock his merchandise, stating, “Our retailers are always saying, ‘Can we have the black version?’ So I said, ‘Why don’t we just do an all-black collection?’”

Wang's retailers will have nothing to complain about with the chosen shades for his latest collection, but what they may not have bargained for is how utterly subversive each piece is. Wang equipped his models with a daring spin on the classic combat boot, adding a thick platform and no-nonsense studs for good measure. Intriguingly enough, some of the collection's most renegade pieces were a pair of studded pajamas and a studded velvet robe, which created the illusion that the Wang woman is both meticulous about her appearance and unwilling to adhere to conventional dress codes. Both qualities sound familiar when one thinks about the goth style of dress.

A number of designers chose a different path instead of taking the goth trend head-on, creating mashups between opposing styles to eccentric effect. Rag & Bone's Fall 2015 collection was goth-meets-athletic, pairing trim cropped suits with electric yellow windbreakers and black, lace-trimmed slip dresses with white tees. Marc Jacobs's cutting-edge collection combined gothic tradition with ladies who lunch elements of tweed and ladies who engage in bondage with black patent leather accents and transparent accents. And though Donna Karan's collection was largely noir, the looks were professional, opulent and alluring, qualities that the average goth aficionado might eschew.

2015's interpretation of goth is much more complex and stimulating than the matte black lipstick and ill-fitted black attire of year's past, but the punk-inspired style is very much in play for autumn. Whether you choose to pair your black lace with a sports jersey or your black lipstick with a floral frock, now is the time to play with a formerly daunting trend.