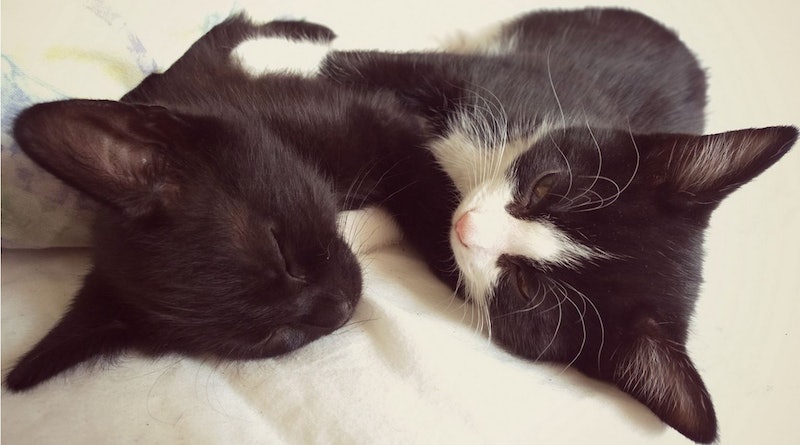 You've heard of drinking water, drinking black coffee, and taking a shower as popular cures to getting alcohol out of your system after you've drunk too much — but a new study just found the only sobriety technique worth trying: Apparently, cuddling is an antidote to alcohol. You heard me. I guess that means it's time to go find a buddy and snuggle up, right?

Technically we don't know whether this technique will work on humans yet — but we do know that it works on rats. Researchers from the University of Sydney and Germany's University of Regensburg gave some rodents both alcohol and a flood of oxytocin, one of the primary hormones responsible for feelings of love and affection (and yes, it's scientifically known as "the cuddle hormone"). They also had a control group that was only given alcohol so they could see clearly whether the oxytocin made a difference. It turns out that it did — so guess what happened? That's right: The rats who were given both the booze and the oxytocin wound up less drunk than the rats who were deprived of the hormone.

Why did this happen? The scientists found that oxytocin prevented the alcohol from reaching certain parts of the brain, which prevented further intoxication. Although the results have yet to be replicated on human subjects, the researchers remain optimistic that these findings could lead to breakthroughs for those in recovery from alcohol addiction.

Cuddling is not only potentially sobering, but also has a whole host of other benefits! Besides just feeling really nice, here are five other benefits you can reap from a good cuddle session:

1. It Boosts Your Mood

Thanks to the amazing power of oxytocin, dopamine, and serotonin, all of which are released during cuddling, holding someone close can lessen depression and put you in better spirits. So next time you're feeling blue, reach for your main squeeze instead of the TV remote!

2. It Boosts Your Immune System

If you're Vitamin C-deficient, consider cuddling more to boost your immune system. The more physical human contact you have, the less stress you'll harbor, which is one of the main causes of illness. The next time you're feeling sick, reach for your partner instead of a glass of OJ!

If you find yourself dealing with insomnia, try cuddling before you hit the pillow. Oxytocin helps you to relax, which has been shown to potentially lead to better sleep. The emotional effects of cuddling can also help you to catch more z's, science has found.

4. It Helps to Reduce Pain

If you're sore after hitting the gym, cuddling can aid in muscle relaxation, as our friend oxytocin helps to ease muscles and soothe pain. I can't think of a better work-out motivator than a post-cardio cuddle session!

5. Cuddling Can Improve Your Sex Life

Those who enforce post-coitus cuddling report having a higher level of satisfaction with their sex lives, according to a study from the University of Toronto. This is because taking the time to focus on your partner after sex helps to connect you emotionally and psychologically. I personally think cuddling is the best part of having sex, and it seems that science is on my side!

The takeaway is that if you're not cuddling, you really should be, since there are a plethora of health benefits to doing so!