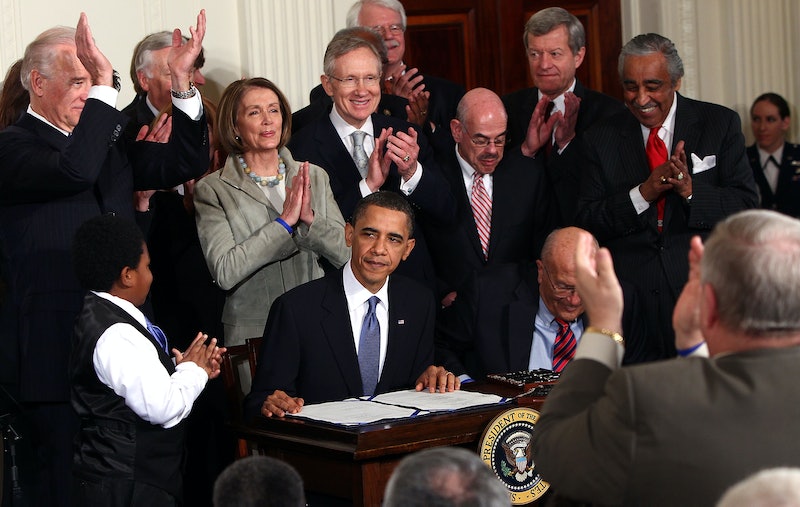 On Tuesday, as expected, President Obama vetoed the Keystone XL Pipeline legislation, marking his third veto in the Oval Office. Republicans in Congress wanted a permit to begin construction on the pipeline that would carry oil from Canada to Texas, but Obama's administration believes they didn't follow proper procedure or consider the harmful effects the pipeline could have on the country. Historically, Obama has taken the veto power very seriously, only putting it to use when he feels it's absolutely necessary.

His two previous vetoes killed a bill on foreclosures and a continuing resolution made unnecessary by other legislation. Neither were a big deal, but his latest veto will likely cause problems between him and the Republican-led Congress. Previous presidents have been much looser with their veto power. George W. Bush vetoed 12 bills (one overridden), Bill Clinton 37 (two overridden), and George H.W. Bush 44 (1 overridden), including pocket vetoes in which the president just never signs the bill into law.

Even if Obama vetoes another bill before his time in office is up, he will still have issued less vetoes than the last 22 presidents. The last president to veto less bills than Obama was James Garfield, who died after a few months in office. To break down presidential vetoes by the numbers...

Franklin D. Roosevelt vetoed more bills than any president in history. However, he also spent more time in office than any other president — a total of 12 years. Of his 635 vetoes, 263 were pocket vetoes and 9 were overridden. In 1944, he rebelled against the informal tradition of never striking down a revenue bill when he vetoed a tax law that he thought profited the greedy.

The most vetoes issued in a single two-year Congress term also goes to FDR. He vetoed 167 bills during the 76th Congress, which met from January 1939 to January 1941.

Of the total 2,565 bills vetoed since George Washington's time in office, only 110 have been overridden. That's fewer than 5 percent. In order to override a presidential veto, each chamber of Congress must reach a two-thirds vote.