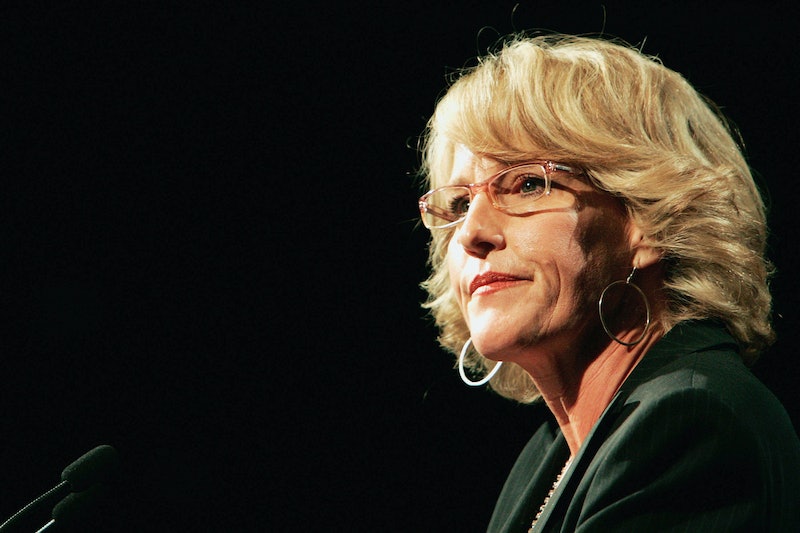 Watch out, Big Pharma: The Brockovich is back. Consumer rights advocate Erin Brockovich is taking on Bayer to get Essure, a permanent birth control procedure that's resulting in adverse effects for thousands of women, off the market. Brockovich, who first gained fame when her successful campaign against Pacific Electric Co. was made into a Hollywood biopic, is already building a community of supporters. Her first step in the campaign against Essure has been to create a website where women who have had the procedure can come together, share their experiences of the procedure, and sign a 3,800-signature strong petition.

Essure was designed to be a safer and cheaper alternative to tubal ligation (aka having your tubes tied), and is a sterilization procedure. During the outpatient procedure, a bendable coil is passed through the vagina and cervix to the fallopian tubes. Scar tissue forms around the coils, which blocks sperm. Conceptus, the company that originally manufacture Essure, estimates that more than 700,000 women have had the procedure. More than 800 have filed complaints, including 150 who report broken coils and 80 women who became pregnant after the procedure. Thousands of women have reported other adverse effects.

"There's something wrong with the device, in my opinion," Brockovich said. "It's a form of permanent birth control, and women's organs are being perforated … It's ridiculous that at any level we try to defend this. If 30 women did suffer harm for unknown reason, we'd investigate. We have thousands injured. I don't think it's safe."

Reported injuries have varied from mild cramping to far more serious matters, such as organ perforation. In clinical trials, about three percent of the 745 women had their cervix pierced by the coils during the procedure. Three or four women's bodies even rejected the device completely and expelled it. The study also noted that there was the possibility of other organs being punctured, besides the fallopian tubes and uterus.

"No form of birth control is without risk or should be considered appropriate for every woman," said Bayer spokeswoman Rosemary Yancosek, who said Bayer took the safety of its consumers very seriously and was "very sad" to hear about these injuries.

Although she's looking into injury claims, it's going to be a tough fight in the courts. Despite the results of the trials, the FDA granted Essure tort exemption status when the device appeared on the market in 2002. This means that once the device is implanted, there's no legal recourse for women if it goes wrong.

"If there's a problem, the company gets a pass, because they have preemption," Brockovich said. "It dawned on me the consumer didn't know. The women didn't know that this existed."

More like this
This Company Will Send STI Tests Right To Your Door
By Lexi Inks
Wimbledon Alters All-White Kit Rule Amid Candid Period Discussions
By Catharina Cheung and Rachel Mantock
Iran Has Issued A Death Sentence Over Mahsa Amini Protests
By Catharina Cheung, Darshita Goyal and Maxine Harrison
Amanda Gorman Shared A Powerful Message On Meghan Markle’s Penultimate Podcast
By Darshita Goyal
Get Even More From Bustle — Sign Up For The Newsletter