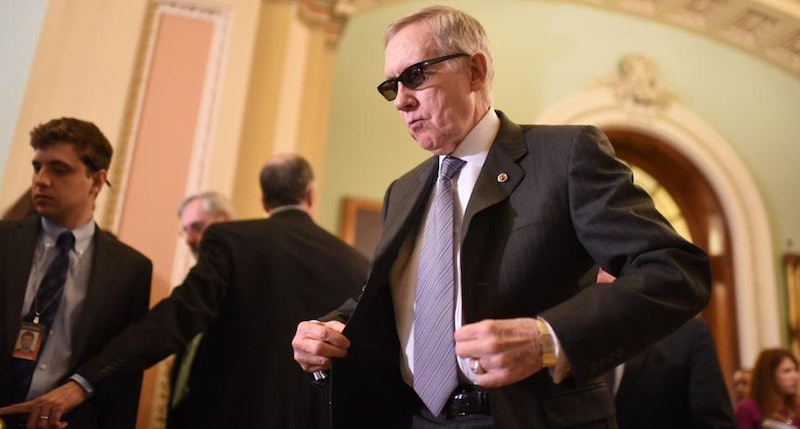 After a serious exercise accident back in January, Senate Minority Leader Harry Reid (D-Nev.) was told that he might lose sight in his right eye. That said, when Reid showed up to an indoor press conference on Tuesday, sporting a pair of sleek black sunglasses, it took all the willpower in the world for the press and public not to laugh (even if they really, really wanted to). Fortunately, social media users aren't known for holding their tongues: Reid's sunglasses have sparked a wave of hilarious memes (which everyone is allowed to laugh at in the privacy of their own home... or train car... or cubicle).

The purpose of the news conference had been to discuss a proposed "clean bill" which would prevent a shutdown of the Department of Homeland Security on Friday. After discord over a portion of the original funding bill, which included language about overturning President Barack Obama's amnesty and immigration action, both congressional Republicans and Democrats were able to come to an agreement which would allow for funding to the department to continue. Senate Majority Leader Mitch McConnell (R-Ky.) told reporters in a separate press conference on Tuesday that Congress hoped to pass the legislation "very quickly" to ensure that schedules would not be interrupted.

Of course, none of that mattered to the social mediasphere, which continued to tweet and post hilarious reactions and captions to Reid's now infamous shades.

After the initial incident on Jan. 2, Reid's office released a statement saying that the senator had "received treatment at University Medical Center in Las Vegas" for multiple broken bones and "injuries sustained in an accident he suffered while exercising at home."

Representatives assured the public that Reid's doctors had expected a "full recovery" as well. While political opponents and media outlets openly questioned whether or not it was time for the Senator to consider stepping down, gesturing in private quarters to his many vulnerabilities, Reid and his associates kept a lighthearted attitude about it. After one reporter at Tuesday's news conference questioned whether his sunglasses were a "sign [he was] getting better," Reid pointed to the black sunglasses and replied, "We’re working on my beauty here."