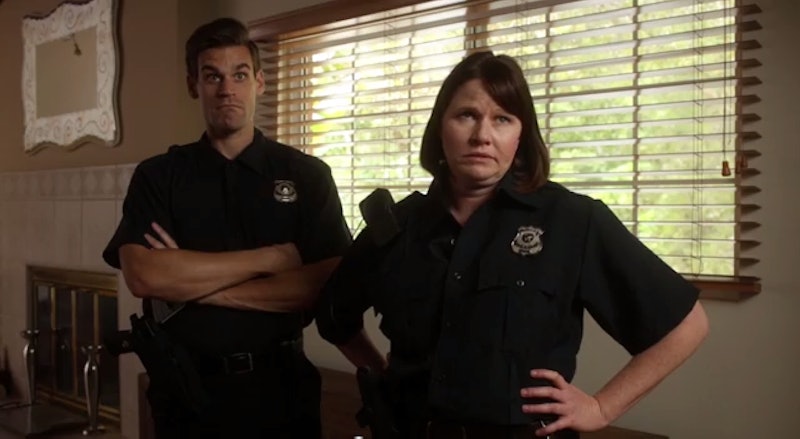 According to the Rape, Abuse and Incest National Network (RAINN), 68 percent of sexual assaults go unreported. And many people don’t seem to understand why. In this short video, “If a Robbery Report Was Treated Like a Rape Report,” writer and director Cynthia Kao highlights the comments, behaviors, assumptions from police officers — and friends, family members, universities, lawyers, society — that often discourages survivors from filing reports. It may be walking a thin line to compare sexual assault to a laptop robbery, but by making this comparison, Kao is highlighting just how absurd and harmful some of the myths about sexual assault can be.

After Tom, the robbery victim, tells the cops that his brand new Macbook was stolen, one of the them comments, “Pretty sexy. You flaunting it?” When Tom explains that his laptop was on the bureau in front of the window, the other cop says, “flashing your goods for all the world to see? That kinda sounds like you were asking for it.” These statements are exactly the kind slut-shaming sentiment expressed when people ask rape survivors what they were wearing and where they were when they were assaulted. They place the blame of the assault of the victim for wearing the “wrong” clothes or being in the “wrong” place. It ignores the fact that no matter what a person was wearing or where they were, they didn’t deserve to be sexually assaulted. As Tom says, “I should be able to put my computer wherever I want.”

The video only gets worse from there. Throughout the skit, they continue to make a slew of comments that place the blame on Tom and attempt to discourage him from reporting the crime. If the behavior of the police officers seems absolutely ridiculous, that’s because it is. Unfortunately, this is the reality many people face when it comes to reporting sexual assault.

More like this
How The City Healed Five Years On From The Manchester Arena Attack
By Ella Glover
10 Times Boris Johnson Got It Wrong On Trans Rights
By El Hunt and Sam Ramsden
If Your Refrigerator Is A Mess, These 25 Organizing Products Can Help
By Courtney Young
Here's Your Daily Horoscope For May 23, 2022
By Mecca Woods
Get Even More From Bustle — Sign Up For The Newsletter