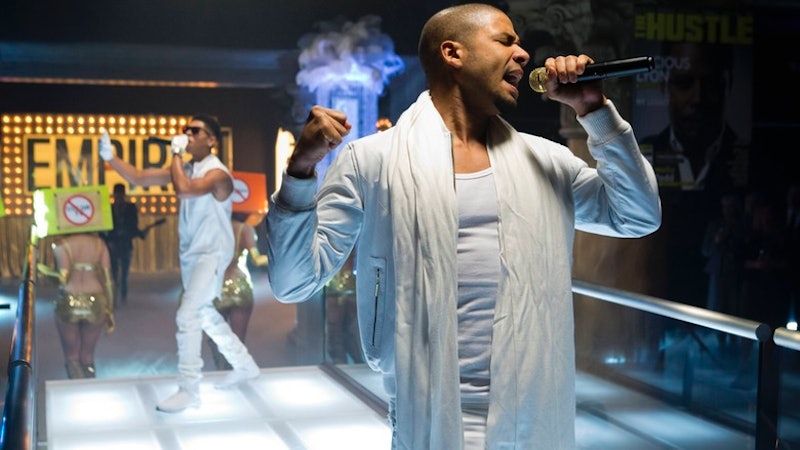 Jamal Lyons (played by cutie Jussie Smollett) is the most interesting character on Empire. While his brothers are spinning off into crazy levels of dysfunction (Hakeem) or forgetting to take his meds and plotting a Shakespearian-level family takeover (Andre), Jamal’s plotlines are by-and-large representative of his evolution as a man, musician, and son. He has the best music on the show (it’s very evocative of Frank Ocean, blended with a little bit of Babyface), and Timbaland (the show’s musical overlord) has done an excellent job maintaining that these are songs that an artist like Jamal would actually write and perform. In fact, Jamal's songs on Empire have done an excellent job of portraying his growth as a character.

Of course, Jamal’s life isn’t all songwriting and rainbows. His father, Lucious, is aiming for one of his sons to inherit the family business, but Jamal’s sexuality essentially disqualifies him as a contender (in Luscious’ mind, at least). Jamal’s mom, Cookie, is his manager and is basically using Jamal’s fledging artistic success as a means to get back at Lucious. Jamal is also fighting with his brothers and losing his boyfriend. All of that sounds like it would breed some decent tunes, huh? Interesting here is the evolution that Jamal’s lyrics have made over his arc on the show. By listening to specific songs from certain parts of the season, it’s fairly easy to tell Jamal’s emotional state.

Jamal kicks off his musical season with “Good Enough,” a song about not being able to live up to the standards of your family (I think we know who this song is about, no?). He sings, “I gave you all of me/But it still ain’t enough to make you happy/I gave you everything/It still don’t measure up.” From these lyrics, it’s safe to say that Jamal’s confidence when it comes to his father is shot. “I’ll never be big enough to pay your dues/But I keep trying/And you just keep on making me jump through hoops,” Jamal sings. The lyrics in “Good Enough” are emotional and relatable, but they certainly lack the swagger seen in a mature, confident artist.

After Jamal lets go of trying to impress and convince Lucious that he is, I don’t know, a viable human being, he writes and records “Keep Your Money.” Sort of self-explanatory, no? Jamal sings, “Work hard and play even harder/Gotta save up all my nickels and quarters/Can’t ask you for a handout/It’s time to be a man now.” This is his kiss-off song to Lucious, saying that he doesn’t need his father in order to be a successful artist and, most importantly, a confident person. In singing “You ain’t worth the time/Can’t let it go to waste,” Jamal finally realizes that Lucious isn’t worth all this drama. Yay! Jamal’s growing as an artist and growing away from the clutches of his father.

As Jamal’s star rises (thanks to Cookie, let’s be real), he does a song with his brother, Hakeem, called “Money For Nothing.” Could we be thinking that Jamal’s newly self-assured persona had something to do with this carpe diem, spend some cash attitude? He sings, “Commas and zeros, that's the way we do it/We make it work in this economy/Rollin' dinero, pockets stay polluted/Money is dirty and we don't play clean.” These lyrics are more representative of today’s popular party anthems. When Jamal sings “ain't nothin' in this effin' world for free,” he has shed the shy persona of “Good Enough” and realized that he wants this dream, he’s the only one who is going to go out and get it for himself. Maybe with Cookie’s help.

So where will Jamal go from here? I would personally like to see him completely screw over Lucious (that man, SMH), but a gal can only dream. In the meantime, I’ll be waiting to hear Jamal croon his next song.