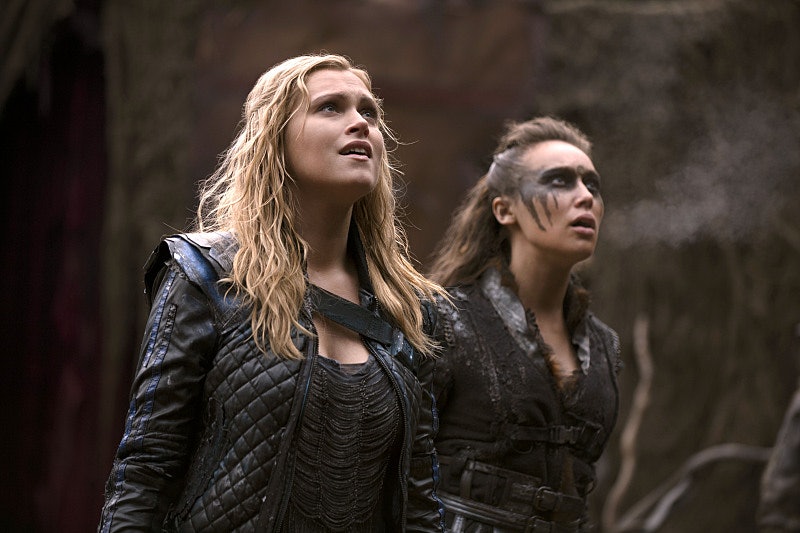 If you watched the pilot episode of The 100 , you were probably hooked instantly, and have come close to salivating at the promise of a thrilling new episode each week on The CW. This show is non-stop action, and the show's writers are not afraid to shake things up and kill off major characters. Each episode has crazy twists and turns, and you never really know what kind of threat is lurking in the surrounding forest. And before you look to the source material for a short-cut, the books that The 100 is based on are very different from the TV series.

If you thought you could read all three books to see what's coming up next on the show like in Game of Thrones, you were wrong. The show and the books have gone down vastly different paths, and you can only really speculate as to whether any of the book's storylines have crossed over into the TV series. There are a few main characters who are featured in both, because how could you really have a show and book of the same name without at least a few similarities? But there are several characters in the show that do not exist in the books, and a couple in the books that aren't in the show. Kass Morgan, the author of the book series, has discussed how much she likes changes the show's writers have made, but as a fan of both, it's hard not to wonder why some of the coolest storylines were omitted from the show. Here are the most glaring differences between the two.

In the books, Clarke is one of four main characters who shares their POV on being a delinquent sent to Earth. She has training in the medical field, and that becomes very useful once on the ground. And both of her parents were scientists, who were executed for going against policy.

In the show, she is much more of a leader, and a ruthless one at that. She was originally locked up as an innocent girl who just knew too much, but in the books, she is arrested and convicted of treason. And there isn't a broken bond between her and her mother, as Abby has a huge role on the show and not in the books.

If you watched The 100 first, then it'll crush your soul to learn that Finn, Raven, Murphy, Charlotte, Jasper, and Monty are not featured in the books. I mean, how can Finn not be there when he has such a major storyline with Clarke? I know. It's kind of bananas.

In the books, there are a few characters who never left the page. Glass is one of the four main characters and just before she is sent to Earth with the others, she escapes and stays on "The Colony," aka The Ark. Her character provides the POV of life in space as the Colony begins to run out of oxygen. Other major characters missing from the show are Thalia (Clarke's BFF), Asher, and Graham.

3. The Story Of Wells

Wells dies very early in Season 1 of the show, but he lives on in the books. There he got a spot on the ship because he loves Clarke and can't be away from her. They are in a committed relationship when they land on the ground and their love story continues with obstacles and breakups throughout. He is actually the main authority figure amongst the 100, instead of Clarke. And instead of Octavia, he is the one to have a relationship with a Grounder.

In the show, Clarke and Octavia are unfairly kept in prison for being victims of their own circumstances. In the books, Clarke is actually guilty of treason.

And Octavia has an even sadder existence in the books than in the show. She was kept hidden in a closet, like in the show, but only until about the age of five. After that, she lives in the Colony's orphanage and has some traumatizing experiences there that lead her to suffering from PTSD and an addiction to pills. She gets arrested for stealing pills and that's what gets her a spot on the ship. When they land on the ground, Octavia is only 14 years old. And even though she does get kidnapped by the Grounders, there is no romantic relationship and no steamy cave sex.

5. The Power Of Bellamy

Shippers of Bellarke (myself included) will be happy to know that Clarke and Bellamy are romantically involved in the books. There's a love triangle with Clarke, Wells, and Bellamy, and even though she's very hot and cold with Wells, Clarke shares a steamy kiss with Bellamy in the forest while looking for Octavia.

The show makes Bellamy seem like a ruthless thug at first, but he is much more docile in the books. Even though his will to survive and protect the ones he loves has remained strong, he has calmed down quite a bit. Maybe that's an indication that a sexy moment for Bellarke is coming soon on the show? Let us pray.

First of all, in the books they aren't even called "Grounders," they are called "Earthborns." And they don't even show up until the very end of the first book. There is no war between the two groups, and the Earthborns have always known about the "sky people."

More like this
'Bridgerton' S3 Teases Exciting Social Season For Penelope Featherington
By Bustle
Another 'Sex Education' Star Has Joined The 'Doctor Who' Franchise
By Darshita Goyal
'SAS Rogue Heroes' Season 2 Is Set To Be An Explosive Watch
By Sophie McEvoy
The 'Firefly Lane' Book Ending Teases Way More Tears To Come In 2023
By K.W. Colyard
Get Even More From Bustle — Sign Up For The Newsletter