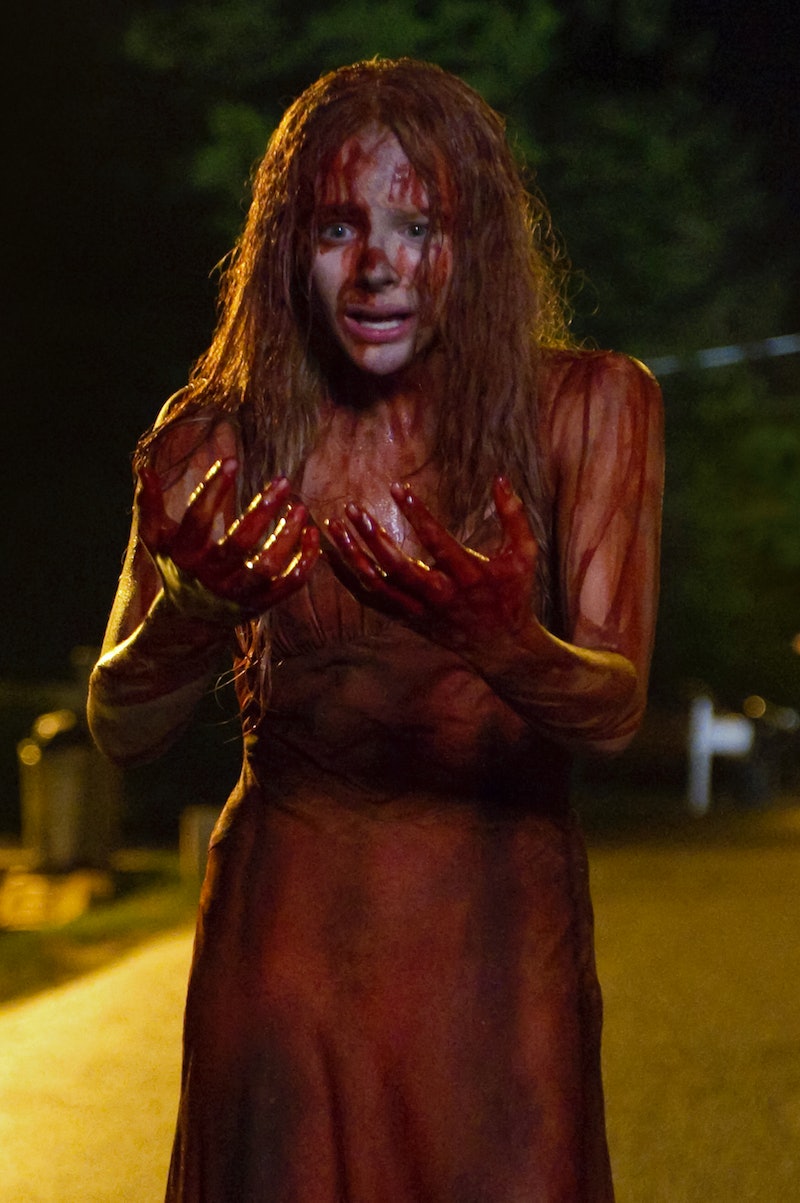 If you felt that horror movies have some repetitive archetypes for women, you aren't alone. We rounded up a dozen female characters from horror flicks for two reasons. One, because we thought it'd be a fitting accompaniment to the Halloween season, and two, we knew it was our responsibility to you to document the portrayal of ladies in these movies. Let's hop right in.

Character: Regan MacNeil (Linda Blair). Of note: The original character in the novel was a boy.

Power dynamic: Struggles against the devil, rescued by a brave dude of the cloth.

Probable inner-monologue: “Can’t believe this priest thought I was just PMSing. Also, when this is over, I need some detangler.”

Traits: Goes from pretty to monstrous, telekinetic powers. When the girls at school relentlessly shame her, she vows to take her oppressors down for good.

Power dynamic: It’s the young women who mess with each other, while the guys are fairly intelligence-free pawns in their sick games.

Traits: She’s gorgeous, and can’t be trusted with money. She steals 40 grand, switches cars, and ends up at a motel where she attracts the uneasy owner. Marion sets Norman Bates off on their dinner date when she suggests he put his mother in an institution. (Hitchcock goes low budget with signature black and white, but also by not providing much body coverage for Leigh.)

Power dynamic: The woman’s not slick enough to pull off her crime, and the cross-dressing man embodying his own mother finds the unsuspecting damsel in distress in the shower. At least there’s no way it’s mommy issues.

Probable inner-monologue: “Should have sprung for the Marriott where Do Not Disturb signs actually mean something.”

Traits: Bit of a control-freak. Once her son Jason drowns at the summer camp when she’s not looking, she goes on a killing spree. Then she haunts him by ordering him to “Kill for Mother.”

Power dynamic: She’s running the show posthumously. Even Lady Macbeth couldn’t do that. Strangely, she’s angry about feeling like an irresponsible mother.

Probable inner-monologue: “You just cannot look away, even for a second.”

Traits: Face that’s so haunting it actually makes Lydia from Beetlejuice look like Pippi Longstocking. She’s a powerless mother who can’t protect herself or her son. Though she is quick with a baseball bat in one instance, we think she should have known better than to stick with a husband whose eyebrows go like that.

Power dynamics: She doesn’t seem to have a job, other than worrying about the men in her life going off the rails, which is like a full-time deal. (Her son has an imaginary friend Tony and her husband has an imaginary writing career.)

Probable inner-monologue: “No dial tone makes me one screwed woman.”

Traits: Popular, fun loving, and sexually objectified, these women pay up for having way too much of a good time and look fetching while doing it.

Power dynamics: Too happily successful to notice they’re about to get stabbed in the back/stomach.

Probable inner-monologue: “I can’t BELIEVE this is happening to me of ALL people. To ME!”

ARCHETYPE 4: Female as the Savior, aka, Payback’s a Bitch

Traits: Tough FBI student with a troubled past. Getting stalked by a mad man is way to predictable, she prefers to stalk the madmen herself.

Power dynamics: Though she trades personal details for intel, she’s possibly the most worthy opponent who outwits some seriously maniacal men.

Probable inner-monologue: “Can’t see a thing in this basement. Can’t wait for my beach vacation.”

Traits: Paragon for the “final girl.” Brainy and good-natured, it takes a while but discovers she wields power of her own. She’s resourceful with a knitting needle, metal hanger, and her killer’s knife.

Power dynamics: She fights back against her murderer brother with bravery and thinks quickly, ultimately surviving with help from a man.

Power dynamics: She destroys Freddy Krueger all on her own by adopting the killer’s mentality. ​Accessing her inner-strength, once she's got him pegged, she uses booby traps to Home Alone the hell of out the house. No help from anyone.

Probable inner-monologue: “Sleep is for losers and boys.”

Power dynamics: At the movie’s start, it looks like she’s ornamental, but then the main guy gets offed, and she becomes the heroic icon of feminine strength. In one particularly memorable showdown, she burns all the queen’s babies.

Probable inner-monologue: “Don’t send a man to do a woman’s job.”

Traits: Resident angel of death and serial killer, a deceptively nurturing woman who reveals her disturbed intentions underneath her motherly veneer.

Power dynamics: She must call the shots on how her favorite books end and everyone around her, but powerless against binge eating.

Traits: Mastered hypnotic fire dancing while wearing a live snake six years before Britney Spears ever did. Ability to pour beer down her leg without so much as an errant splash, transforms into a fanged reptilian blood-sucking vamp.

Power dynamics: For her solo performance at Titty Twisters, she doesn’t dance like she’s prey for men. Rather, she controls the room.

Probable inner-monologue:: “This is just way too easy.”

More like this
What’s New On Netflix: 'Stranger Things' & 'Somebody Feed Phil' Return
By Arya Roshanian
What’s New On Netflix: A Victoria Justice Rom-Com & The Return Of David Letterman
By Arya Roshanian
8 LGBTQ+ TV Shows & Movies Like 'Heartstopper' To Watch On Netflix
By Alyssa Lapid
Sandra Bullock, Girlboss Extraordinaire
By Matt Harkins & Viviana Olen
Get Even More From Bustle — Sign Up For The Newsletter