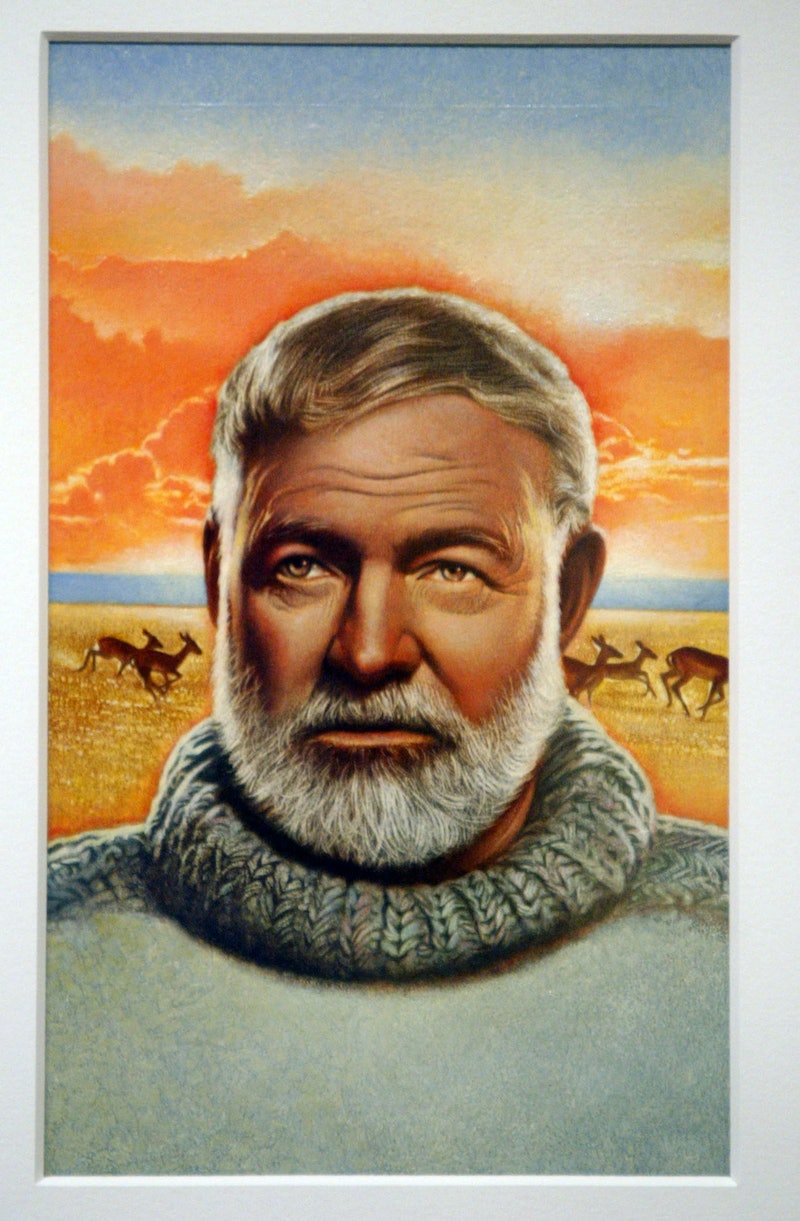 Ernest Hemingway’s life was nothing if not eventful.

A core member of Gertrude Stein’s “Lost Generation,” the Nobel Prize-winning novelist was one the most influential American writers of the 20th century. His wild machismo and untamed alcoholism made him a polarizing persona, ripe for both criticism and praise in the literary and interpersonal realms. Just how we like it.

The adventurous icon’s reputation precedes him, and much is known about his many exploits. Recently, however, a new book revealed yet another tidbit Hemingway can add to his résumé: Failed KGB spy. Below, six little known Ernest Hemingway facts you probably didn’t learn about as a disgruntled high school literature student:

1. The spy who failed me: In Spies: The Rise and Fall of the KGB in America (Yale University Press), authors John Earl Haynes, Harvey Klehr and Alexander Vassiliev reveal that Ernest Hemingway was once on the Soviet Union’s list of agents in America. According to Vassiliev’s KGB-era notes, Hemingway was recruited in 1941 while on his way to China. However, he failed to give the KGB any “political information” and was never “verified in practical work”—making him just about the worst spy we’ve ever seen.

Oh, and his codename was “Argo.” You can’t make this stuff up. (Just kidding. You totally can.)

2. Brushes with death, fake death, and potentially accidental real death: The great American author publicized the injuries he suffered during World War I and World War II in books such as A Farewell to Arms and The Sun Also Rises. He also narrowly evaded death during the Spanish Civil War when three shells burst into his hotel room, and he nearly died of blood poisoning while on an African safari.

Incredibly, Hemingway and his fourth (yup; fourth) wife, Mary Welsh Hemingway, survived two plane crashes on two consecutive days in 1954. The couple escaped the wreckage of a sightseeing plane that had been taking them around East Africa only to board a rescue plane that crashed and burned just after takeoff. Newspapers initially reported that both had died—and who could blame them?

Hemingway (finally) died on July 2, 1961 from a self-inflicted gunshot wound, though even his actual death was shrouded in mystery. Given Hemingway’s history of depression (three of his siblings and his father all killed themselves) and tumultuous life, his death is often ruled a suicide. But the New York Times obituary that ran the day after his death quoted Mary as saying that he inadvertently shot himself while cleaning his gun—an ironically fitting way for the hyper-masculine, accident prone novelist’s life to come to an end.

3. What's in a name? A lot, apparently: Hemingway has been quoted as loathing his first name because it reminded him of “the naïve, even foolish hero of Oscar Wilde’s play The Importance of Being Earnest.” As a result, he adopted for himself a vast variety of (often inscrutable) nicknames. In high school, he gave himself the nickname “Hemingstein,” and others called him “Champ” because of his love of boxing. His first wife, Elizabeth Hadley Richardson, and son, John, called him “Ernestoic,” “Tatie,” “Tiny,” and “Wax Puppy.” Others called him “Wemedge,” “Ernie,” “Hem,” and “Hemmy.” But the most widely-recognized and long-lasting nickname of Hemingway is “Papa,” which he ostensibly adopted as a more masculine alternative to the “naïve, foolish” implications of “Ernest.”

4. F. Scott Fitzgerald’s suggestion, Hemingway’s timeless response: Hemingway famously wrote 47 different endings to A Farewell to Arms before finally settling on one. His good friend (and fellow Lost Generation buddy) F. Scott Fitzgerald read an early manuscript of the book and offered his two cents on an ending. Fitzgerald suggested that Hemingway end the novel with what has become one of its most renowned passages: “The world breaks everyone and afterward many are strong at the broken places. But those that will not break it kills. It kills the very good and the very gentle and the very brave impartially. If you are none of these you can be sure that it will kill you too but there will be no special hurry.” But Hemingway, apparently, didn’t think much of Fitzgerald’s idea, seeing as he scribbled the words “Kiss my ass” at the bottom of his friend’s 10-page letter.

5. His parents weren’t his biggest fans: The parents of Ernest Hemingway were ultra-religious, and therefore none too fond of their son’s often vulgar subject matters. When Clarence Hemingway received his copy of Ernest’s 1925 short story collection, In Our Time, he furiously sent it straight back to the publisher.

6. America's Next Top Hemingway: Ever been told you look exactly like Ernest Hemingway? Well, you’re in luck—the Ernest Hemingway Look-Alike competition is held annually in Key West, Florida to “celebrate the birthday of Ernest Hemingway and honor his work as author and sportsman.” This year’s contest takes begins on Thursday, July 18, and the finals are held on Saturday, July 20. Last year, controversy swirled the normally friendly competition waters. Frank Louderback, a three-time Look-Alike contest veteran (who also happens to be an attorney) was embroiled in a murder trial at the time of the contest and requested a leave of absence from the trial in order to participate. Judge Steven D. Merryday (shockingly) rejected his request, but did so in style: He employed a psychoanalysis of Hemingway, quoted from The Sun Also Rises, used the word “perfevid,” and wished the counsel luck in next year’s contest, but asserted that “The motion is DENIED.”

"Papa" would have been proud.