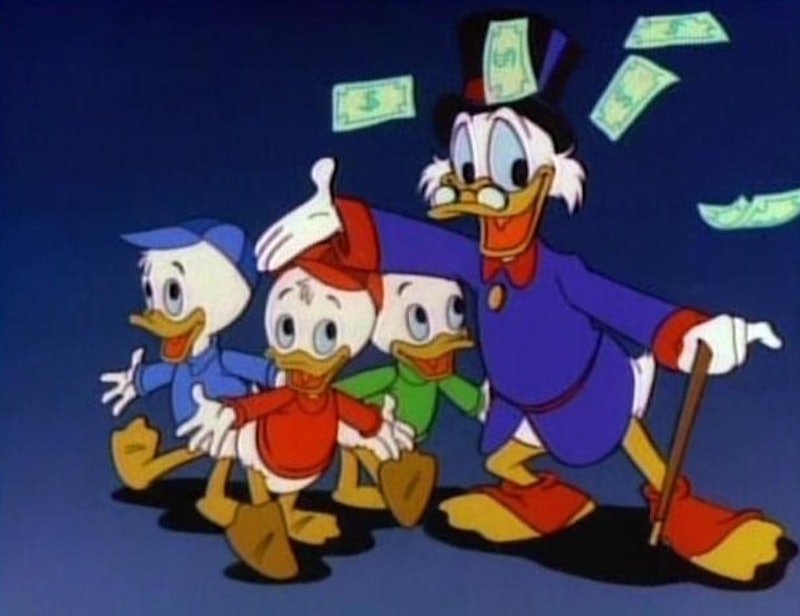 Let's face it, you've probably been missing DuckTales since that adorable video of real ducks recreating the theme song. Well I have wonderful news: DuckTales is getting a 2017 reboot. And although the logistics of watching DuckTales in your deep 20s sounds a bit creepy, I'm more than ready to be reacquainted with Scrooge McDuck, who I wish was MY uncle. Sure, he had his faults, but ultimately he's better than most of our relatives.

In case any of you are drawing a blank, the premise of DuckTales starts when triplets Huey, Dewey, and Louie move in with their great-uncle Scrooge in his mansion in Duckburg. To give you some insight, they had previously been living with their Uncle Donald, who always sounded like he swallowed a kazoo, and he gets traded in for this magnificent gazillionaire with a Scottish brogue. UPGRADE.

From there Scrooge, the triplets and Token Female Duck (THE PINK BOW MEANS SHE'S A GIRL) Webby embark on a variety of trips through space, mummy's tombs, and all sorts of crazy places. Although he is a glaring example of the 1 percent, you had to admit, all of this sounds mighty appealing. And the envy doesn't stop there. Here are eight reasons you secretly wish Scrooge was YOUR uncle.

As previously mentioned, nearly everyone in the immediate Duck family has an annoying quacky cadence. Not this majestic being. Scrooge has a delightful Scottish accent WAY cooler than the slurred tone your Uncle Stephen gets when he has too much bourbon at Thanksgiving. Seriously, listen to Scrooge's awesome voice as he's all fired up about a sea monster eating his ice cream. Not only does he sound wonderful, but the man has his priorities straight.

2. His impeccable sense of style.

Being of good fortune, Scrooge always dressed to the nines. Few people could get away with pairing a top hat, spats, and a cane, but when Scrooge did it he really exemplified the best of old-fashioned menswear. And let's not forget that indigo coat, boasting a color that was clearly specially imported. Overall, the outfit tops Aunt Meredith's knitted cat-print vests tenfold.

3. His star status as a famous literary icon... sort of.

This one's not really canon, but it's worth mentioning that Scrooge is based on A Christmas Carol's Ebenezer Scrooge, one of the most universally recognized and duplicated figures in literature. In fact, Disney had their own version of A Christmas Carol, and it starred none other than this fine feathered creature, truly the Lawrence Olivier of ducks. I think we can all agree that's SO much cooler than your Uncle Rick's claim of touring with The Grateful Dead back in the day. Oh my god, who cares, literally EVERYONE in your generation "toured" with The Grateful Dead.

Like Indiana Jones. Your Uncle Bobby is a used cars salesman.

6. The fact that he's filthy rich.

The most obvious factor, but also not all it's cracked up to be. Scrooge was notoriously stingy with his cash flow. However, the triplets MORE than benefitted from living in the lap of luxury, one that provided race cars, lasers and airplanes. SO much better than Uncle Terry's $20 Claire's gift card (you're 26, what are you even going to do with that). And anyway, they could just sit patiently and wait for him to die so they could inherit all that, although he'd likely pull a King Tut and be buried with his riches. On that note...

7. His pool made out of gold coins.

Over the summer I visited my Aunt Laura in Staten Island, and she has one of those above ground pools. I was floating in one of those inflatable lounge chairs, a glass of Chardonnay in my hand, and I thought, "Wow, life is probably not going to get any better for me after this." But you know what WOULD be better?

A freaking pool made out of gold coins. With chardonnay. Bless Scrooge and his money bin.

8. And of course, the wacky adventures!

Solving mysteries AND/OR re-writing history? Even though Scrooge was never my uncle, I'm glad that viewers got to at least join in on the Ducks' adventures, and I can't wait till they return.