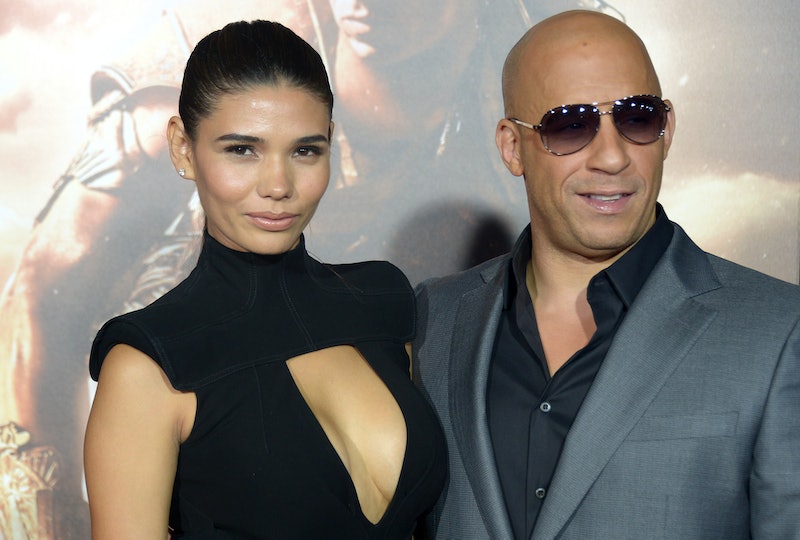 Congrats are in order for this well-known action star! According to People, Vin Diesel and girlfriend Paloma Jiménez are pregnant with their third child, which means this family is going to be super busy with three little ones running around. The couple is already proud parents to son Vincent Sinclair and Hania Riley. It's very rare for a light to be shined on Diesel's personal life and his family, but the reason this time around has something to do with his movie Furious 7.

Per The Hollywood Reporter, the baby's arrival is around the time Furious 7 hits theaters. With that said, Diesel reportedly backed out of the March 10 premiere in Abu Dhabi, and Universal Pictures relocated the world premiere to Los Angeles on April 1 so Diesel could attend. A source told THR, "He wants to be with his family at the birth; it's a beautiful thing. What human being wouldn't?" According to a studio insider who spoke with THR, Universal is "happy to premiere the film in L.A., birthplace of the franchise, where a core fan base exists."

As stated above, Diesel is an extremely private person. He's never made any pregnancy announcements and only once stepped out formally with his family when he received a Hollywood Walk of Fame star.

One thing fans do know about Diesel is that his friend and Fast and the Furious co-star Paul Walker influenced his life as a father. Diesel once said, “I say to Paul, ‘You know, should I be in the delivery room or how’s that going to work?’ And he says, ‘You know, so many guys will tell you, “Don’t do it … you can’t stomach it … you’ll never look at the girl the same,” [but] it’s the best thing you’ll ever do in your life.’”

Diesel added, “[I] did everything but literally pull her out. I cut the umbilical cord. I was more present than I could ever have dreamed of, but the bonding that that allowed for with my daughter is priceless.”

Diesel even shared this sweet photo of Walker and his daughter showing how much Walker meant to him and his family. Needless to say, Walker will always have an impact on Diesel's life. Congrats to Diesel and his family on their future arrival.