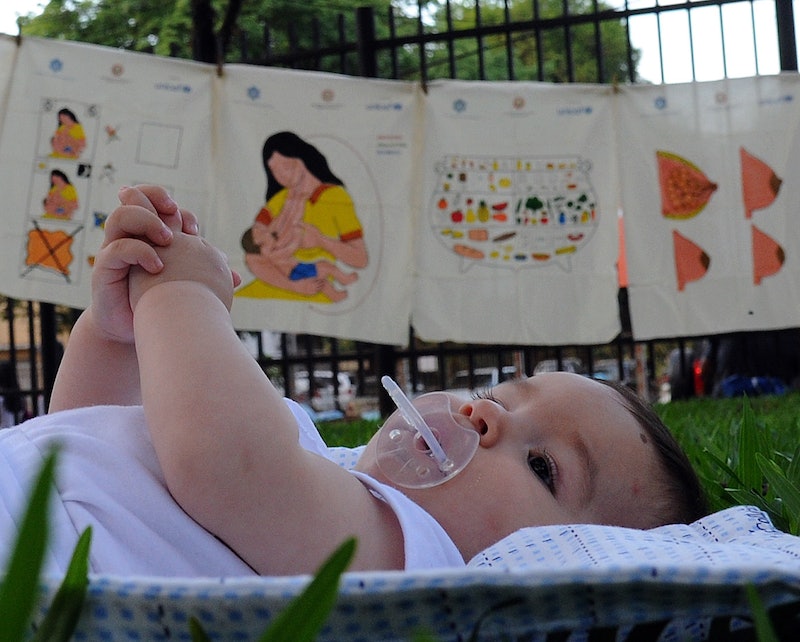 Social media sites have been notoriously biased against pictures of breastfeeding moms, claiming they are "inappropriate." So really, it's only natural that breastfeeding moms would retaliate by inventing the #Brelfie — a selfie taken while breastfeeding. Don't you just love the 21st century?

Brelfies have been popping up lately for various reasons. Some people just want to post a breastfeeding selfie for the same reasons you'd post any selfie — it's a way of saying "This is me; this is my life." Others, though have been using the brelfie hashtag as a way of protesting social stigmas against breastfeeding and the way social media sites have treated photos of the act as "obscene." Both Facebook and Instagram have recently updated their policies to say that breastfeeding photos are allowed, but it's been a long time coming.

Really, the fact that people get so bent out of shape about seeing breasts used for their intended biological function makes very little sense to me, especially in a world where models wearing string bikinis are routinely posted on billboards. But somehow showing skin for the purposes of sexual objectification are more acceptable than providing a human child with nutrients?

I go back and forth trying to decide if the issue is the male-gaze-centric idea that women's bodies are inherently sexual in any context, or if maybe it's just another instance of trying to police women's bodies and our behavior in public space, where the space be physical or virtual. Either way, it's really weird.

But hooray for brelfies, fighting back against the stigma!

More like this
Black Women's Equal Pay Day Highlights An Upsetting Problem
By Brandi Neal
Berriez Founder Emma Zack On Her Size Inclusive NYFW Show
By Dominique Norman
Women Around The World Are Cutting Their Hair In Solidarity With Mahsa Amini
By Darshita Goyal
Help! I'm Not Getting Any Attention On Dating Apps. What Can I Do?
By Sophia Benoit
Get Even More From Bustle — Sign Up For The Newsletter