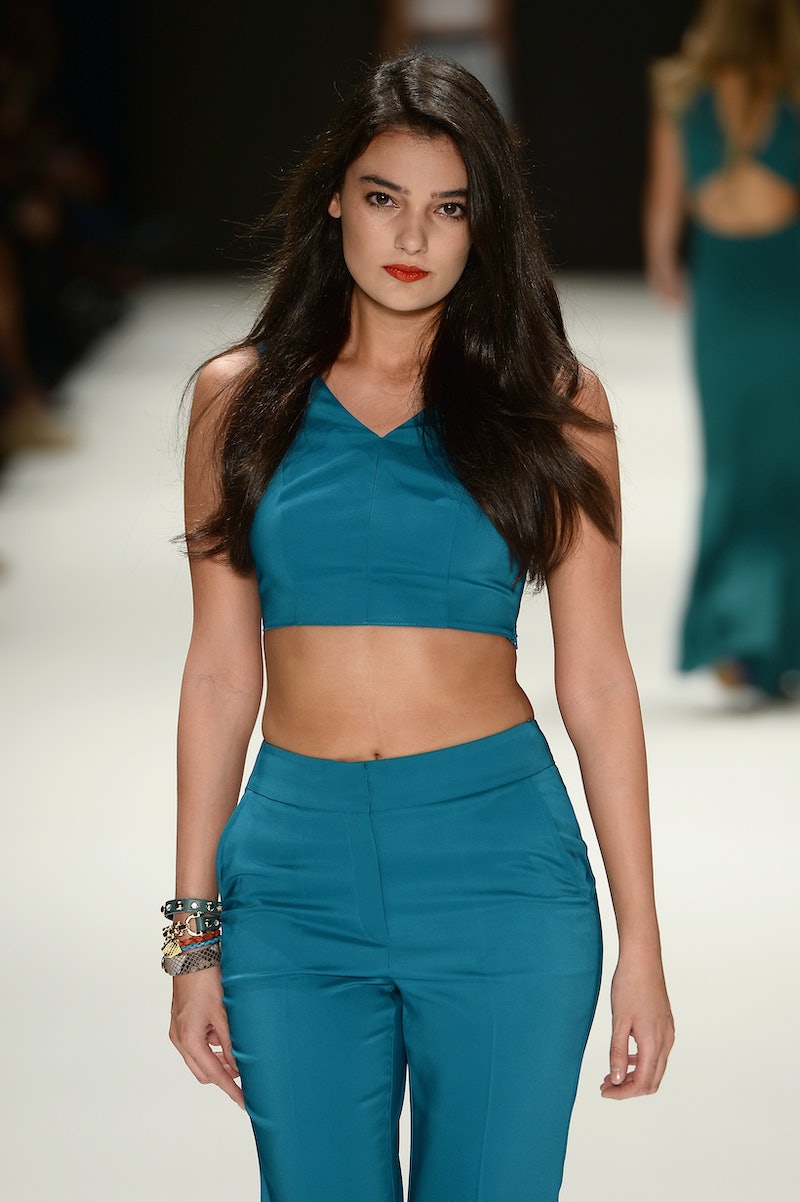 We may have a free and unregulated internet in the United States, thanks to the FCC's decision to cooperate with President Obama, but freedom of speech remains contentious in other countries. Turkey's legacy of censorship certainly isn't going away anytime soon. In the latest of a string of highly publicized incidents of censorship, prosecutors are demanding that a model and former Miss Turkey, Merve Büyüksaraç, be prosecuted for insulting Turkey's president.

Büyüksaraç, 26, stands accused of insulting a public official, which is a crime in Turkey. In the incident in question, Istanbul prosecutor Umut Tepe claims that Büyüksaraç shared a quote from a satirical poem on Instagram that criticized President Recep Tayyip Erdoğan. Büyüksaraç testified in January that she "may have quoted a poem" called The Master's Poem from Turkish satirical magazine Uykusuz, but she insisted that she did not intend to insult Erdoğan. She posted a photo on Instagram quoting the poem but took it down soon after, when a friend warned her that her post might have been criminal. The poem adapts the country's national anthem.

In January, Büyüksaraç told a prosecutor:

I don't precisely recall the content I have shared on my Instagram account. However, I might have taken excerpts from Twitter, other social media websites or the cartoon magazine Uykusuz. I did not personally adapt the poem titled "The Poem of the Chief." I shared it because it was funny to me. I did not intend to insult Recep Tayyip Erdoğan.

If convicted of insulting the President, Büyüksaraç could face two years in prison. This might seem shocking, but there has been an upswing in censorship in Turkey recently. Since Erdoğan took office in August, 67 people have been charged with insulting him. Erdoğan has cracked down on Turks who express dissatisfaction with the government, arresting hundreds for political protests.

These protests are widespread, both in public and online — Büyüksaraç told Bloomberg, "I didn’t insult the president — at that time he was prime minister, so it changes the case. I only shared the poem, which was shared by 960,000 people in Turkey, and which is also not an insult."

Erdoğan hasn't been shy about how much he hates the Internet, and he's been taking action. Ahead of his election in March 2014, he had Twitter and YouTube blocked across the country for a month. In October 2014, Erdoğan told a press conference he was "increasingly against the Internet every day," adding, "Media should never have been given the liberty to insult."

In January, a court in Ankara, the Turkish capital, ruled that several Facebook pages containing images of the Prophet Mohammed were "insulting." Mark Zuckerberg faced heavy criticism after he complied with the Turkish government's demands, blocking the selected pages in Turkey. His cooperation with the country's Internet censorship came only weeks after he publicly proclaimed solidarity with satirists in Paris who were killed in January — "We never let one country or group of people dictate what people can share across the world," he had said earlier that month. Those Facebook pages joined a number of other websites blocked by the government for showing the Prophet Mohammed's image.

Government censorship in Turkey has risen dramatically in recent months. According to Twitter's 2015 transparency report, Twitter information requests from the Turkish government increased over 150 percent since February 2014. The Turkish government was the prime source of information requests to the company, submitting 477 out of 796 total and leading to over 1,800 blocked tweets. The next-highest number of requests came from Russia, whose government requested content removal for 91 tweets — less than one-fifth the total submitted by Turkey. Twitter did not provide information for any of the requests from Turkey, which focused mainly on libelous offenses.

Turkey's government has been restricting, censoring, and imprisoning journalists as well as citizens increasingly over the past few years, and it's only getting worse under Erdoğan. Entire newspapers have been prosecuted. The government may soon pass new Internet control legislation, which would enable the Telecommunication Authorities to demand the takedown of any content they deem a threat to national security. The bill is intended to enhance the "protection of public order" — by fining website owners, and if they cannot pay, jailing them. The country has already dropped 20 places on the World Press Freedom Index since they ranked 132nd place in 2010 — they are now the 152nd freest country in the world.