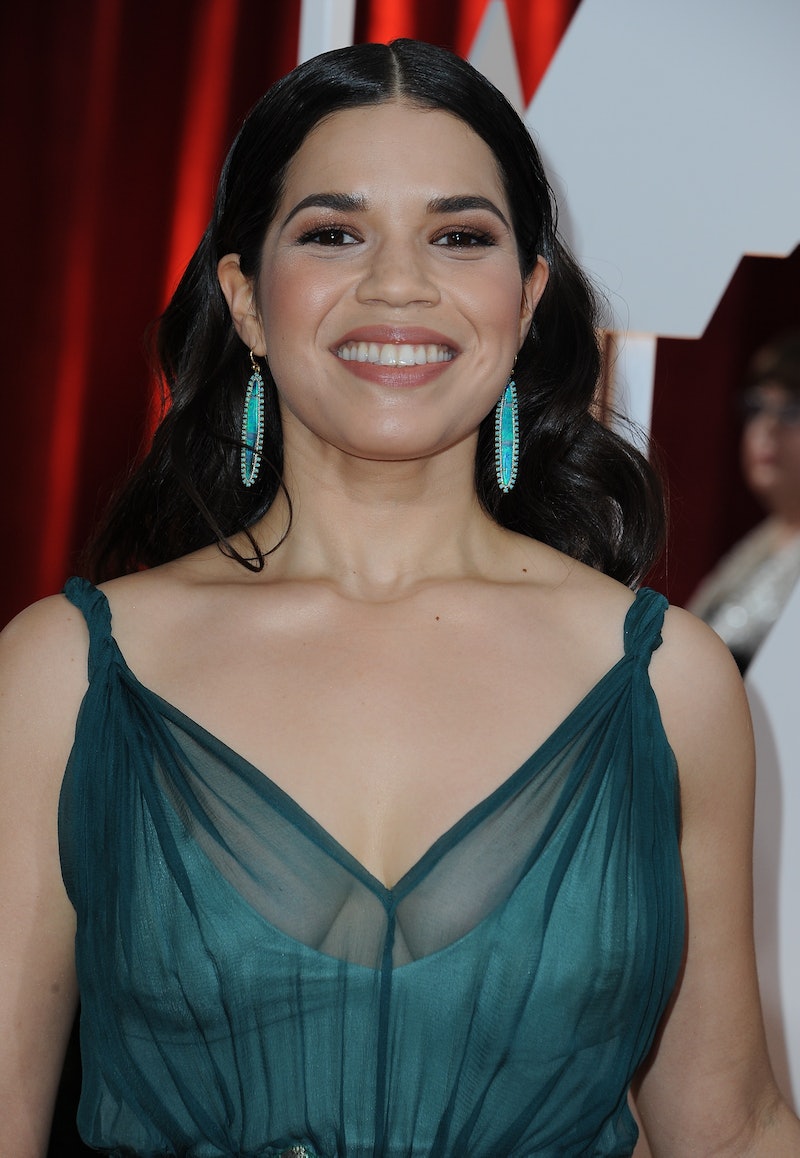 There are two sides to every relationship. Actually, there are multiple sides to every relationship — if you count friends, parents, children, and anyone else who has a vantage point into the romantic life of two individuals. This concept is explored in the upcoming film X/Y, written and directed by Ryan Piers Williams, and starring his wife America Ferrera. "I was really interested in themes of relationships and unique challenges presented in this day in age in making meaningful and lasting connections," Ferrera says.

In the film, Ferrera plays Sylvia, a woman whose relationship with her longtime boyfriend Mark (played by husband Piers Williams) crumbles in the opening scene. "Every movie at the end of the day is about relationships," Ferrera says. "Talking about love has ultimately been the point of storytelling."

But what's unique to X/Y is not necessarily the content, but the structure in which the familiar narrative is explored. We see four separate but intertwining stories unfold on screen. "We move the storyline forward but switch points of view. The point of that as an audience is to switch perspectives and to not get comfortable with anybody's one view of the situation. It drives the point that we all live in our own little world, and we have our unique perspectives. When we can drop into someone else's point of view, we relate to them," Ferrera says. "We're used to being told as audiences who's the good guy, who's the bad guy, who's right, who's wrong. I think that tool of switching perspectives rattles you up as an audience member."

This format is not a usually embraced by bigger budget films that utilize proven structure to guarantee an audience and ticket sales. "As an audience member, I love all kinds of entertainment, but I certianly respond to stories that feel close to the bone, that feel like they're hitting a raw nerve.You get a lot more of that in films that don't appeal to an enormous audience, or films that have to make a lot of money at the box office," she says. "The point of these characters is not to be liked, regardless of their relationships, what they share is a loneliness."

And ironically, their loneliness is shown through a mixture of physical activities — working out, creating art, and having sex — a lot of sex. "Shooting sex scenes isn't ever very sexy. It's always a little bit awkward," Ferrera says, who has onscreen love scenes with both her husband and Academy Award winner Common.

"But Common is the loveliest, loveliest person. So easy to work with. We knew Common and we knew his work, we were big fans of his. My first thought was, 'He's hot!' and my second thought was, 'Well what about him for the role?' And then I had to ask my husband's permission, which is you know, a little untraditional," she says. "The real reason we cast Common is not because he is very, very attractive and easy to do those scenes with, but because he brought a real humanity to a rule that could easily be labeled a bad guy."

Both Common and America Ferrera attended the 2015 Oscars, and like the rest of us, Ferrera was blown away by Common's performance of the award-winning "Glory" at the ceremony. "I was crying the whole time. His speech was breathtaking and powerful," she says. "It's so wonderful to see artists out there doing the real work of art — which is to push culture and our conversations further in the direction of progress. He's a true artist, an amazing person, and that song is so stunningly beautiful."

Ferrera is long-time friends with Amber Tamblyn, who plays Stacey in the film. The pair, along with Blake Lively and Alexis Bledel, all starred in The Sisterhood of the Traveling Pants films together, and will reunite once more for a third and final film. "Ryan sent Amber the script and she really responded to the character and wanted to be a part of it," Ferrera says. In terms of Sisterhood 3 spoilers, Ferrera was tight-lipped, save to say: "There's not much to share other than it's in development. It's being developed and we all hope it comes together!"

See X/Y in theatres and on VOD Friday, March 6.

More like this
Your Guide To Watching 'Everything Everywhere All At Once' In The UK
By El Hunt and Sophie McEvoy
How Andrea Riseborough Got Nominated — & Almost Disqualified For An Oscar
By Jake Viswanath
12 Years Ago, Austin Butler Manifested His Oscar Nom In This Disney Movie Scene
By Jake Viswanath
Yes, You Can Stream ‘To Leslie’ In The UK Now
By Sam Ramsden
Get Even More From Bustle — Sign Up For The Newsletter
From hair trends to relationship advice, our daily newsletter has everything you need to sound like a person who’s on TikTok, even if you aren’t.