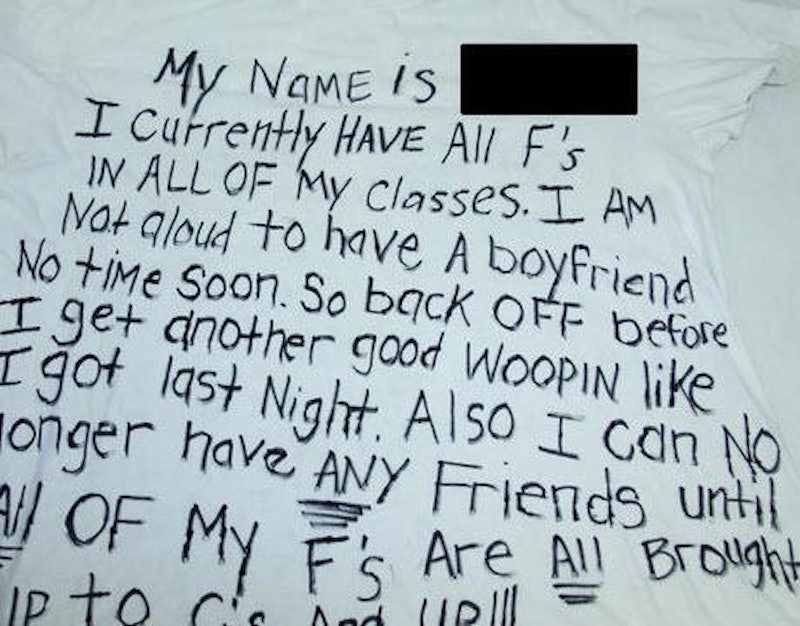 Today in news of terrible parenting, a Florida mother allegedly beat her daughter and shamed her publicly in a t-shirt of her own ill-conceived design. 31-year-old Melany Alexander of Hernando County faces charges of child abuse after a physical assault on her daughter for poor grades, after which she sent the girl to school in a shirt intended to publicly humiliate her for her academic performance.

As NBC Miami reports, Alexander’s daughter was found to have "numerous bruises and belt marks from her shoulders down to her wrists." The marks, she said, were from being struck repeatedly with a belt. The front of the t-shirt she was reportedly made to wear read the following:

My name is [redacted] I currently have all F's in all of my classes. I am not aloud [sic] to have a boyfriend no time soon. So back off before I get another good woopin like I got last night. Also I can no longer have any friends until all of my F's are all brought up to C's and up!!!

"It's obviously someone who went way way over the line," Hernando County Sheriff Al Nienhuis told My Fox Tampa Bay. According to reports, the incident is being investigated by The Department of Children & Families, but in the meantime the child remains in the custody of her parents.

Clearly this is not a situation for which we should speculate without fact. But if this story is true, it's one of the most negligent examples of parenting I’ve read in recent memory.