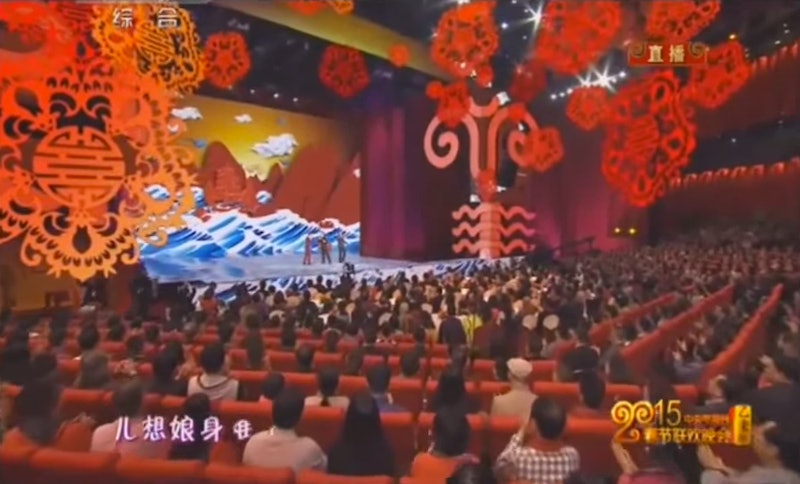 On the eve of its New Year last Wednesday, China was getting ready to celebrate with its biggest television event of the year, the state-run Lunar New Year Gala. Some of the skits featured jokes that mocked "manly women," single women, and female civil servants, prompting Chinese gender rights activists to petition against the event. The petition called China's Lunar New Year Gala sexist and asked citizens to boycott future broadcasts of the show.

So how big is this extravaganza? With an estimated 690 million viewers, it's nearly seven times as big as the Super Bowl. Yeah. It's that big.

Every year, families across China gather around the TV to watch it — an elaborate variety show that features dancers, comedians, martial artists, and other acts in celebration of the Chinese, or Lunar, New Year. While every year the skits dazzle and amaze, this year's skits grabbed viewers' attentions for a different reason.

For example, one skit featured an overweight woman who complained about not being able to find a husband. So her brothers present her with slim, attractive "goddess" to teach her why she's single. If that already sounds ridiculous, then brace yourselves.

The "goddess" sings the following lyrics (translated by CNN):

I've got big eyes, small mouth, a high nose, long legs ... I'm pretty and a bunch of guys are chasing me that give me "face."

(The concept of "giving face" refers to securing or boosting someone's honor or status in a social context and is extremely important in Chinese culture.)

The other woman sings:

I don't have breasts and a bunch of guys are chasing me to do arm wrestling.

Are you cringing yet? Here's the kicker — now the two of them are singing together:

And this skit wasn't an isolated incident. In another, the skit suggested that a female civil servant was only promoted after performing sexual favor on her male higher-ups.

As a result, the Beijing-based newspaper Voice of Women posted a petition letter calling for the boycott of the "poisonous" Lunar New Year Gala. The letter, which has since been removed from the Internet, found at least 44 instances of sexism during last week's gala. Before it was removed, it had garnered more than 1,000 signatures within a few hours of posting. The letter stated (translated by CNN):

In the name of "harmony" it erases the rights of people to live differently. It complacently slanders not just women... but all people, as long as you are eager to think critically and make decisions out of your free will.

One activist who signed the petition told the Associated Press:

We know sex discrimination has existed in China for several thousands of years and has become part of people's lives. The gala will allow people to continue to stereotype women in this way, and let people think they are humorous if they offend women.

Comparing "manly women" and "goddesses," unmarried and unemployed women ... what qualifications do you have to discuss these topics?

State media refuted some of these claims, calling the gala's critics "oversensitive" and reminding viewers that the event is merely meant as entertainment. But is it?

The annual Lunar New Year Gala, which is produced by China's state-run broadcasting network CCTV, has become increasingly political since its inception in 1983 and the government has essentially turned it into another propaganda tool. Starting in the 1990s, the gala began featuring video montages trumpeting the Chinese Communist Party and even to this day, the party and its Propaganda Department have significant influence over the show's content. One netizen wrote online:

It seems to be more a tool to disseminate the central leadership's political agenda rather than an entertainment show.

This year's gala was reported to be one of the most closely supervised by the state. In other words, Communist Party General Secretary Xi Jinping and other high-powered state officials reviewed the completely offensive, sexist material in this year's gala and gave the thumbs-up to the producers. The only thing worse than sexism is state-sanctioned sexism.