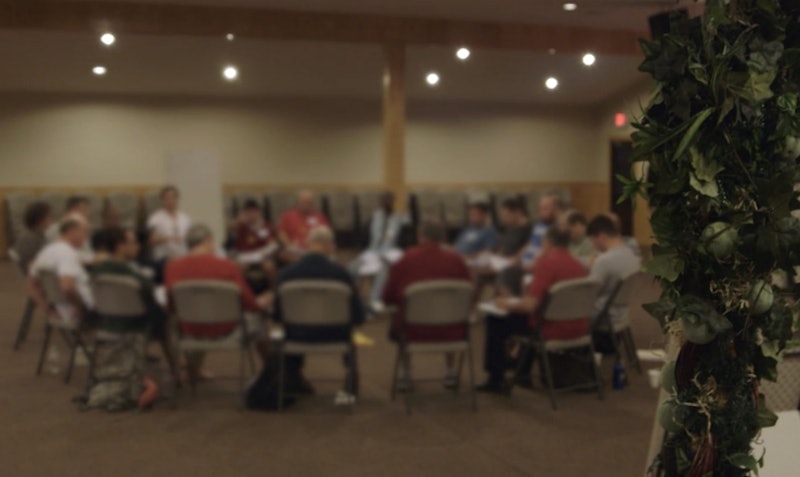 If you’re someone who takes an interest in LGBT rights, you're possibly well aware of the horrible practice of gay conversion therapy. Conversion therapy—most commonly practiced by licensed clinicians, unlicensed counselors, and religious leaders—promises that gay people can be “cured” of their same-sex desires and, essentially, be recoded to be heterosexual. Clearly, these claims are complete rubbish, based in the damaging and erroneous belief that sexuality is a choice or a mistake that can be corrected, and is generally all incredibly harmful—particularly to kids and teens, the most common targets for this type of "therapy".

What you might not know is how conversion therapy actually functions. A new video from Vice sheds light on the inner workings of one of these programs, giving viewers valuable insight into both the people who run conversion programs and those who sign up for them. In the first part of a series on the subject, Vice follows devotees of a program called “Journey Into Manhood,” a weekend-long retreat that claims to “[resolve] unwanted homosexual attractions” through “intensive emotional-healing work.”

Even more telling is the number of former proponents of “ex-gay therapy” who have since rescinded their initial support. In 2013, for example, John Paulk, former chairman of ex-gay organization Exodus International, declared that he was, in fact, a gay man and that conversion therapy had not worked for him. In his public apology, he said, “Please allow me to be clear: I do not believe that reparative therapy changes sexual orientation; in fact, it does great harm to many people."

Gay conversion therapy's potential for harm cannot be overstated: it has been shown to cause depression and suicidal tendencies. Children and adolescents are especially at risk when it comes to conversion therapy, as rejection by family can be incredibly damaging. A study conducted by San Francisco State University found that, compared to LGBT youth who had not experienced significant rejection from their parents and caregivers, LGBT youth who did experience rejection were six times more likely to report feeling depressed, eight times more likely to attempt suicide, three times as likely to experiment with illegal drugs, and three times as likely to be at high risk of contracting HIV and other STDs. And this is all on top of research that suggests that LGBT kids in general are significantly more likely to experience depression and suicidal tendencies than heterosexual ones.

In the video from Vice, there is a clip of Dr. Joseph Nicolosi, a clinical psychologist who claims the dubious honor of having “found[ed] reparative therapy,” arguing that gay people experience increased depression, alcohol abuse, anxiety, and self-destructive behaviors. What I find both bizarre and maddening is that he blames these problems on a person's sexuality, completely ignoring the possibility that these behaviors have been widely proven to arise from the trauma of being rejected by one’s family and social community on the basis of one's sexual identity. In other words, he wrongly ignores the trauma of being told that there is something fundamentally wrong with you, placing the blame instead of the perceived "flaw". Conversion therapy is so harmful that the practice has been banned for use on minors in California, New Jersey, and Washington, D.C.

According to its website, Journey Into Manhood does not allow men under the age of 18 to participate; the average age of its members is 35. So where is the harm here? One could argue that adults are allowed to make their own decisions, even when those decisions are harmful to themselves. If these guys want to undergo conversion therapy, it’s their right to do so. This, on the surface, is true enough. Adults make choices all the time that are damaging to them. The problem, however, is that even though Journey Into Manhood doesn’t itself treat minors, it is perpetuating the notion that sexual orientation and gender identity can be altered, and thereby supporting the claims of programs that do attempt to treat minors and giving parents the false notion that their LGBT kids can be “cured.” The video’s most disturbing moment comes near the end: Nicolosi is asked how he would have reacted if his own son had come out as gay. His response? “I would have said, ‘What did I do wrong?”