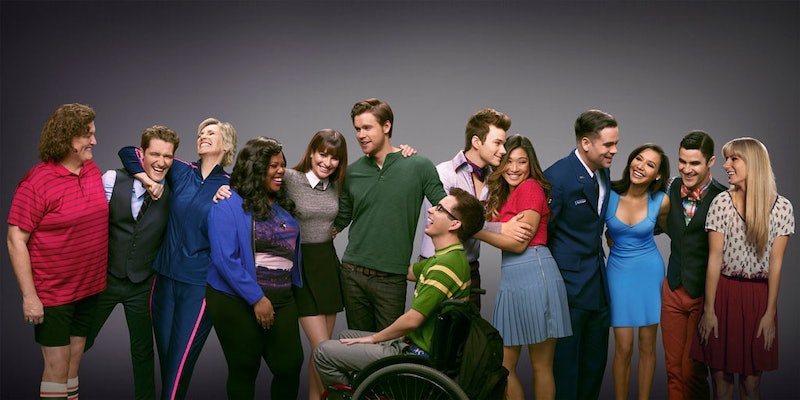 This past week has definitely been a bittersweet one for the Glee family as they finished filming the series finale. While we can only imagine how sad that must be, it seems like it's been a lot of fun as well. Not only has it been a big reunion with all of your favorite Glee characters including Jesse St. James, Lauren Zizes and Sugar Motta, it's also been a celebration as Paramount Studios threw a huge Glee themed carnival on set.

Over the past few years the cast has grown as a family, and so have all of the fans. It will definitely be sad to see the show end, but if we know anything about Glee it will surely end on a high note. When Ryan Murphy first started the show, he had an ending in mind between Rachel and Finn, but after Cory Monteith's tragic death, everything was reconfigured. While there have been many speculations for how the show's new ending might go, according to Chord Overstreet it will definitely be emotional.

"I can't imagine it ending any better than the way it did. I was the most content I had ever been. It was the last take that we did. It was just us—the original cast—and a Steadicam."

So, what exactly does all of this mean? This season has been about getting back to Glee's roots, so could the final scene be one between all the original cast members? Here are some theories we have for the series finale of Glee.

Rachel Will Return to Broadway

Mercedes was totally pushing Rachel to get back in the game (love and music wise), so it only makes sense that Rachel would go back to NYC. Since there is an expected time jump to 2020 in the season finale, maybe Rachel will come back as a success rather than as a failed actress like she did last time.

Mr. Shue Will Return to McKinley

So if you've been watching this season, it's no lie that Mr. Shue is having a hard time coaching Vocal Adrenaline, and it's obvious he misses his alma mater. And with Kurt married to Blaine and Rachel possibly heading back to the Big Apple, why wouldn't he decide to come back?

Even if she retires as principal, it doesn't mean that she won't move up the ladder. Maybe this time she will tackle superintendent putting the whole school system under her reign of terror.

The Former New Directions Will Come Back

With the New Directions reinstated, what's stopping the rest of the gang from returning to McKinley? Everyone from Sugar to Marley can come back to rule the show choir world.

Since there is a time jump at the very end, it only makes sense to have everyone come back for the school's ten year reunion. That would also explain why characters like Jesse St. James and Terri Schuester are in the reunion photo. Jesse transferred when he tried to win Rachel's heart and Terri was a nurse (for like two seconds). It all concludes with a big group number on the auditorium stage.