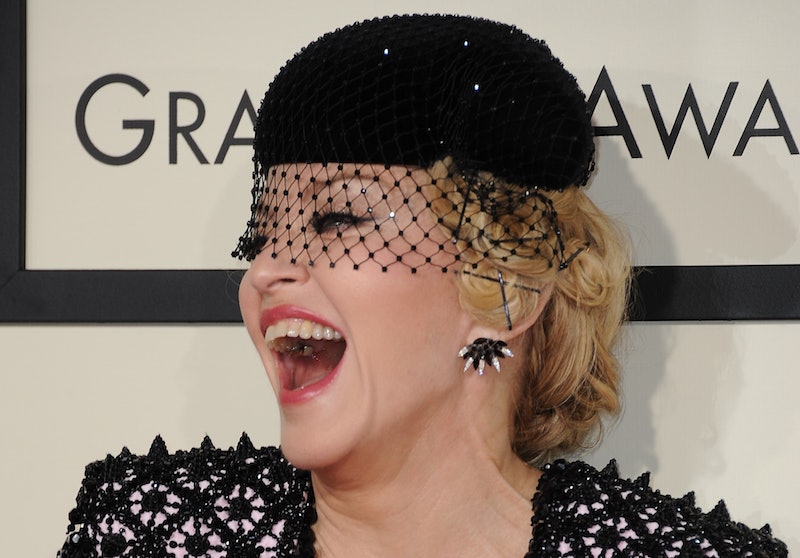 The Queen of Pop would like to have a word with her haters who think she's "too old" to be doing what she's doing. In the latest issue of Rolling Stone, Madonna addresses ageism in our culture, especially towards women. The music superstar also appears on the cover, serving a bit of Blonde Ambition mixed with True Blue-era Madonna. In other words — NAILED IT.

As someone who is often scrutinized by the media for her constant reinvention, Madonna shuts down the idea that women of a certain age, like her, are often the target of discrimination in our society, which she calls "very sexist." The Rebel Heart singer says she will continue to push the boundaries of her own sexuality and wants other women to feel as empowered as her.

"Anybody and everybody would say something degrading to me," Madonna says. "And I always think to myself, why is that accepted? What's the difference between that and racism, or any discrimination. They're judging me by my age. I don't understand. I'm trying to get my head around it. Because women, generally, when they reach a certain age, have accepted that they're not allowed to behave a certain way. But I don't follow the rules. I never did, and I'm not going to start."

Meanwhile, Madonna's RS cover - shot by Mert Alas & Marcus Piggott — marks the pop diva's return to her classic bombshell look. From the curly blonde hair, to the red lips, to those signature eyebrows, the stunning photo is reminiscent of her turn as Breathless Mahoney in Dick Tracy. Yet at the same time, it doesn't feel recycled or "reductive," as Madge herself would say. In her interview, the singer also squashes her ongoing feud with Lady Gaga and talks about how she blazed the trail for other female pop stars.

"When I did my sex book, it wasn't the average," she says. "When I performed 'Like a Virgin' on the MTV Awards and my dress went up and my ass was showing, it was considered a total scandal. It was never the average, and now it's the average."

Check out Madonna on the cover of Rolling Stone magazine below: