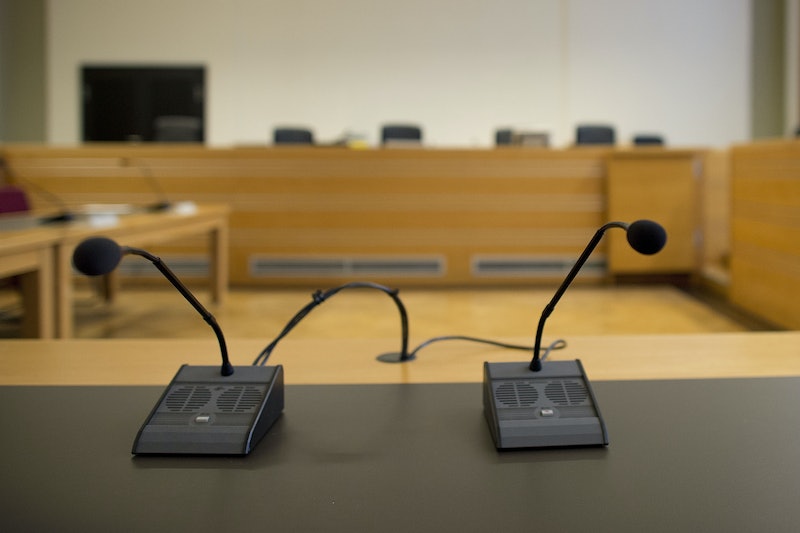 Some court cases are easy to miss. The murder trial of 34-year-old Jodi Arias is not one of them. Following a nearly two-year wait, jurors in the case of convicted killer Arias have begun deliberating a possible death sentence after a previous panel of jurors was unable to come to a decision in 2013. The current jury was seated and read-in on the evidence from the initial conviction in October of last year and, after five months of testimony, have been asked to decide Arias fate.

On the surface, it's not exactly a tricky case. According to court documents, Arias answered "yes" when asked whether she had murdered ex-boyfriend, Travis Alexander, on the evening of June 4, 2008 and admitted to covering her tracks. But when questioned about her initial reluctance to admit the truth in front of a jury, she claimed that she "could never have imagined [her]self doing that to another human being" and that it was "so hard to believe" that she had actually gone through with the murder. Arias also cited past physical and emotional abuses by her mother, who Arias claimed was a drug addict, and father, as well as previous boyfriends (none of which could be corroborated). Her attorneys suggested that the patterns of repeated abuse had left her mentally unstable.

The on-again-off-again couple spent the next two years in a vicious cycle of make-ups and break-ups during which Alexander's friends testified that Arias would sometimes stalk him and peer into his windows to see if he was home. The two connected a final time on the morning of June 4, 2008. Friends of Alexander testified that he had planned a business trip to Mexico and had originally planned to take Arias along, but changed his plans later that spring, instead inviting another woman. Prosecutors alleged that Arias had discovered the news and grown increasingly jealous.

After spending the afternoon together, prosecutors told the court that Arias had flown into a rage and attacked Alexander. Police evidence showed that Alexander's body, discovered in his shower five days later, had been mutilated with 27 stab wounds to the back and torso and his throat had been slit from ear to ear. Police also reported that Alexander had been shot in the face. As Mesa police officer Sterling Hall recounted the scene from the day of the discovery in court proceedings, HLN correspondents reported that Arias "burst into tears".

Arias' original testimony in 2013 lasted 18 days — but her testimony this time around was limited to only two days. During her time on the stand, Arias recounted similar details as before, but had changed her tone, admitting that she felt remorse for the killing. When shown photos of the grisly crime scene, which Alexander's friends had testified was covered in pools of blood, Arias claimed:

This is somebody that I cared about. ... I caused that pain, and those were his last moments; and it makes me sick and ... I wish so badly that I could just do that whole day over again.

During his closing arguments on Tuesday, Arias' attorney, lawyer Kirk Nurmi, questioned whether jurors had the resolve to sentence the convicted murderer to death. "From the day of her birth, the cards were stacked against Ms. Arias," said Nurmi, according to a report by USA Today. "I urge you not to do it," he added, pleading with jurors not to give her the death penalty.

It's a tough call, considering that few of the details of the case have changed since Arias' initial conviction. If a jury couldn't come to a conclusion then, is it at all possible that they will be able to this time around?

Perhaps, says one lawyer. Despite the defense's claims that Arias was suffering from PTSD and emotional turmoil inflicted on her by an emotionally abusive and sexually aggressive boyfriend, it's a difficult case to make, explained criminal defense attorney and legal analyst Jeff Gold, in a comment to Arizona's 12 News on Tuesday. "Whenever you start saying that the victim was responsible for their own death, you'd better tell this jury a pretty good reason of why that was."

Whether she is sentenced to death or not, it seems Arias made peace with her punishment years ago. In an interview with a local Arizona reporter in 2013, after her initial conviction, Arias was quoted as saying that she would not fight a capital punishment sentence. "I believe death is the ultimate freedom," she said.