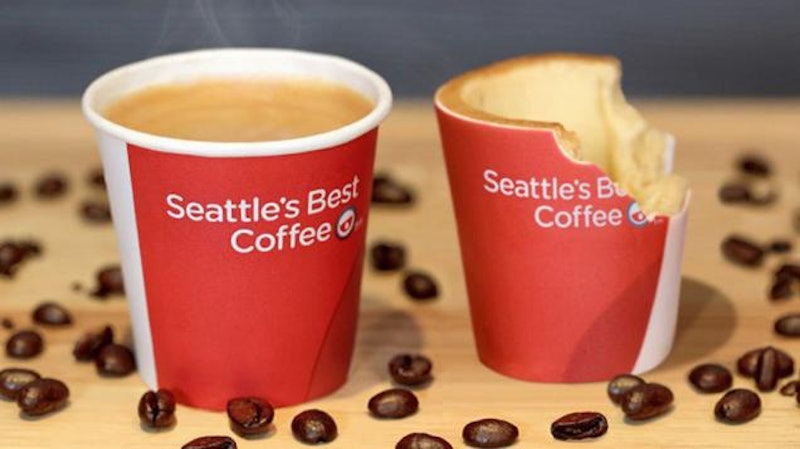 Your morning routine just got a whole lot more exciting. There used to be a time when coffee was just a piping hot beverage you poured into your mug at work and drank up as quickly as your pain threshold would allow. Now, one chain is trying to turn that morning ritual into a religious experience for junk-food lovers everywhere. On Wednesday, Metro UK reported that fast food giant KFC had unveiled a new line of edible coffee cups in collaboration with Seattle's Best Coffee, which recently debuted in the UK for the first time.

According to the report, the cups are made of a cookie (or "biscuit") and lined with a layer of white chocolate. The outside of the cup is wrapped in sugar paper. The cups were developed by the scientists at experimental UK food development company, The Robin Collective, who prides itself on their ingenious creations, like medicinal marshmallows, liquid nitrogen ice cream, and edible terrariums (yup, terrariums — those miniature ecosystems that people like to keep on their bookshelves at home). A company spokesperson told Metro UK that the new edible coffee cups don't just taste sweet, they also provide a healthy dose of aromatherapy.

"We’ve infused different cups with a variety of ambient aromas including Coconut Sun Cream, Freshly Cut Grass and Wild Flowers," said the spokesperson. "These scents were used in our recipes as they have a natural ability to evoke the positive memories we associate with warm weather, sunshine and summer holidays — things that make everyone smile."

Other companies and startups have tried to jump on the recent edible-dinnerware trend, too, including one design team from The Way We See The World, which debuted a set of edible "glassware" at the World Science Festival last April. The cups, dubbed "Loliware", are made of flavored agar (a gelatin substitute) and, according to the company's site were "designed to complement a variety of beverages."

In a May 2014 interview with Entrepreneur, creators and industrial designers Chelsea Briganti and Leigh Ann Tucker explained that an inquiry from vodka company Absolut tipped them over the edge into becoming a legitimate business after their idea took third place in a Jell-O Mold competition in 2010. Said Tucker, "Loliware was born because, as designers, we wanted to have fun getting super-creative with a material, but we have a bigger vision that Loliware will replace a percentage of the plastic cups destined for the landfill."

Cups aren't the only mealtime article getting an edible makeover either. Based in Schiller Park, Ill., the company FoodieSpoon creates a variety of edible, environmentally friendly utensils in a multitude of flavors meant to appease even the most discerning critics. Founded by Kim and Scott Holstein along with Jim Olson, the company provides catering companies and high end events and eateries with simple, but delicious dining options that won't sit around in a landfill for decades.

Belgium food designer Do Eat has also gotten its hands dirty creating a unique, edible dining option with its potato-based verrines, small paper-like boats that diners are able to chow down on after their meal.

Where the edible food industry will go next is anyone's guess. For now, the geniuses behind KFC's new coffee cups at least have the sweet-tooths of the world covered.