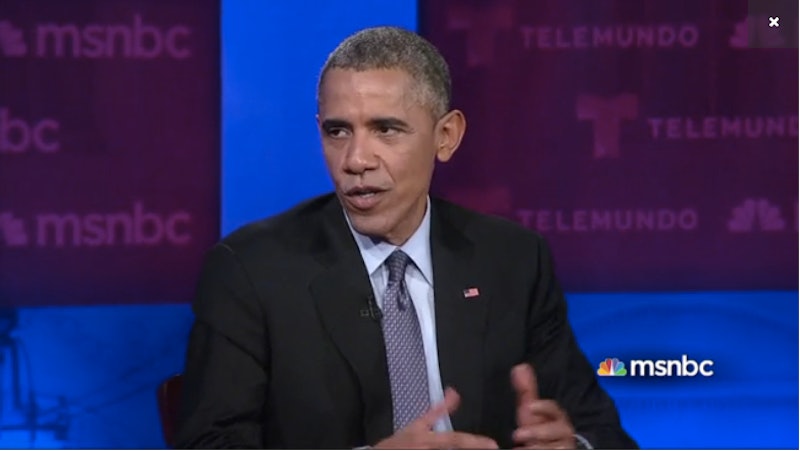 In a televised "town hall" meeting aired on Telemundo and MSNBC on Wednesday evening, President Obama defended his immigration policies as a government shutdown over those very reforms looms nearer. The president accused Senate Republicans of holding government funding "hostage" instead of working toward meaningful immigration reform, jeopardizing America's national security in the process.

"Instead of trying to hold hostage funding for the Department of Homeland Security...fund that and let's get on with actually passing comprehensive immigration reform," Obama said at the televised meeting.

The president's stern remarks come at a time where Republicans and Democrats in both the House and the Senate are engaged in a sticky political battle. Republicans are currently being blocked from passing a funding bill that would roll back some of Obama's immigration policies, which the president enacted through an executive order issued in November 2014. Obama promised that he would veto any bill that came across his desk, as well as any vote "on whether what I’m doing is legal or not," in regard to his executive action. "I will veto that vote, because I am absolutely confident that what we’re doing is the right thing to do," the president said.But Obama used the town hall meeting to not only call out his foes in Congress, but to rally greater support from his voters — specifically, the Latino community. Obama urged supporters of immigration reform to push forward on their own terms, saying:

Obama also received a ton of cheers and enthusiastic applause when he acknowledged America's growing Latino and Asian-American communities, saying:

The fate of Homeland Security funding is still uncertain, as many Republicans on Capitol Hill refuse to stand down. Late on Wednesday, Senate Republicans and Democrats finally came to a resolution, deciding to pass a "clean" version of the DHS funding bill that won't infringe on Obama's immigration policies. The measure would continue to fund the Homeland Security department so a shutdown doesn't occur. However, it's unclear how the House will respond.