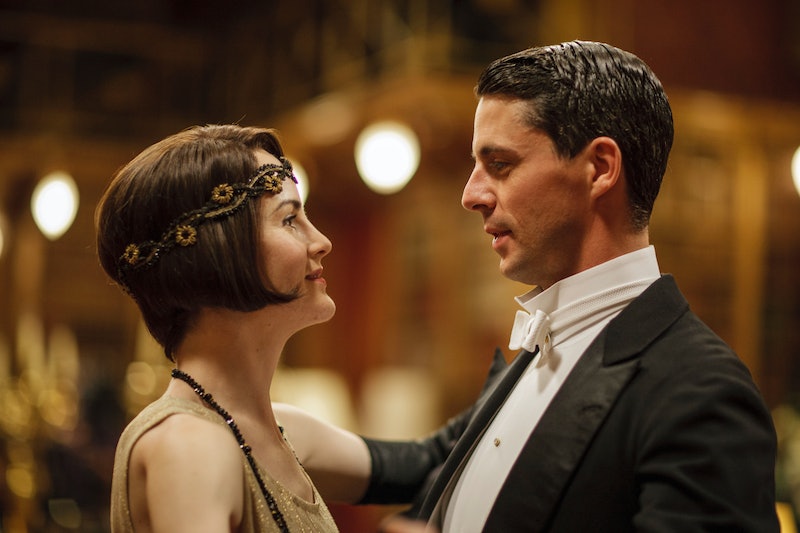 Anyone else scream with delight every time British actor Matthew Goode pops up on your TV? Just me? Well, that's exactly what happened when Goode appeared on Downton Abbey's Season 5 Christmas special as Henry Talbot. I totally forgot that he was guest starring, so it was a nice surprise to see Goode's face. Downton Abbey Season 5 ended with many open-ended questions, including, will Matthew Good return for Season 6?

When Goode was originally cast, it was only for the annual Christmas episode. However, now that he's made his grand entrance, fans can't help but wonder if the talented actor will return for even more episodes. According to TVLine, Downton producers would love to have Goode back. With that said, it all depends on his other gig on The Good Wife, where he plays Finn Polmar. His role on the hit CBS drama is in first position, so if the series picks up Goode's contract for Season 7, then he'll be heading back to the courtroom with Julianna Margulies.

All of that contract business still remains unknown, so let's just keep our fingers crossed that Goode can return to both Downton Abbey and The Good Wife. Until then, here are seven reasons why he'd make Season 6 of the hit period drama even better.

Henry Talbot has the need for speed. Seeing as Henry loves cars and not hunting, Goode would bring even more excitement to England. Plus, can you imagine Mary and the others at Downton maybe racing cars? Yeah, that's something I need to see, stat. Though, I have to wonder if Henry's love of cars will affect Mary, especially seeing as Matthew died in a car accident. However, seeing as Mary gave Henry a smile after he announced his car passion, I think it might work out.

He Has Chemistry With Mary

As soon as Goode appeared as Henry I think all fans knew that he and Mary would have some type of chemistry. Not only did the two share quite the glances, but they also had some witty banter that is right up Mary's alley. You could see the spark in Mary's eyes, which is something she and fans have been waiting for ever since Matthew (ugh, my heart still hurts) died. Who needs Tony and Blake when you have Henry Talbot?

He's Quick On His Feet

No, I'm not referring to Henry's dancing skills, which, yes, were swell. As soon as Rose intercepted Sinderby's former lover and mother of his lovechild, Henry was no idiot. He knew exaclty what was going on. You need to be clever and smart to be a part of this show. Henry demonstrates both of those qualities.

He Has A Background In Period Dramas

Downton Abbey is perfect for Goode, especially since he has experience acting in period dramas. For example, he starred as George Wickham in BBC's Death Comes to Pemberley. Goode can bring all of his period drama acting abilities to Downton, which will make the series that much better.

Anyone want to see Benedict Cumberbatch on Downton Abbey? *Raises hand.* Well, seeing as Goode starred with the Oscar nominee in The Imitation Game maybe he can get his friend to guest alongside him? *Fingers crossed.*

Henry's a car enthusiast. Tom Branson was the former chauffeur. Maybe Henry can lure Tom to stay in England with his cars? I highly doubt that will happen, but, hey you never know. Not to mention Goode and Allen Leech, aka Tom, starred together in The Imitation Game, so I'd love to see these act together again.

Who doesn't want to see Matthew Goode on Downton Abbey? It's a win-win situation.