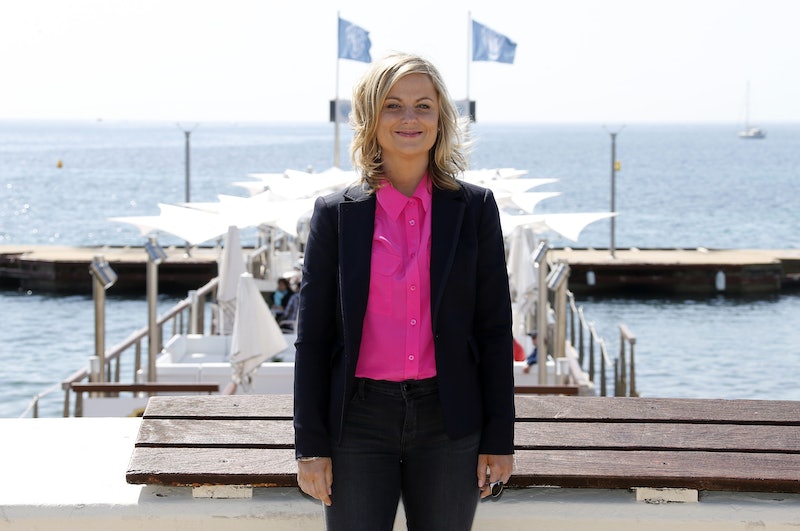 Amy Poehler has been in a lot of fabulously weird, amazing projects during her career, but I'm pretty sure that I can confidently state that this one is without a doubt the strangest. I'm not sure that I can fully explain what it is after having only seen it myself a handful of times — just that I have no clue what exactly I watched, only that I know it was something of brilliance (because, let's be real, anything featuring Amy Poehler is something of brilliance). As displayed in a clip recently unearthed — aka, posted on YouTube by the Second City Network — a 23-year-old Amy Poehler once starred in the weirdest TV pilot known the man, which was titled RVTV.

The pilot was created in 1995, so it's exactly two decades old — and, as Splitsider reports, the strange concept came out of nowhere...literally. As Poehler's co-star Matt Dwyer told Splitsider, "I honestly do not recall where the concept came from. I know it was written by Adam McKay and Tom Gianas, who both went on to write for SNL and of course film and TV. Tom co-directed it. We shot it for a week up in Toronto." (McKay, you may recall, also co-wrote Anchorman and often collaborates with Will Ferrell.)

As for the plot, it's honestly not clear enough to decipher — there's a lot of ranting about couch potato-life, and new-fangled Internet concepts like "hacking." But, the most interesting thing is without a doubt the fact that Poehler — even then, at only 23-years-old — has clearly always been consistent in her comedy style. The character of Leslie Knope hadn't yet come to fruition, but hints of Leslie-isms are pretty clear in her character on RVTV— just call it foreshadowing.