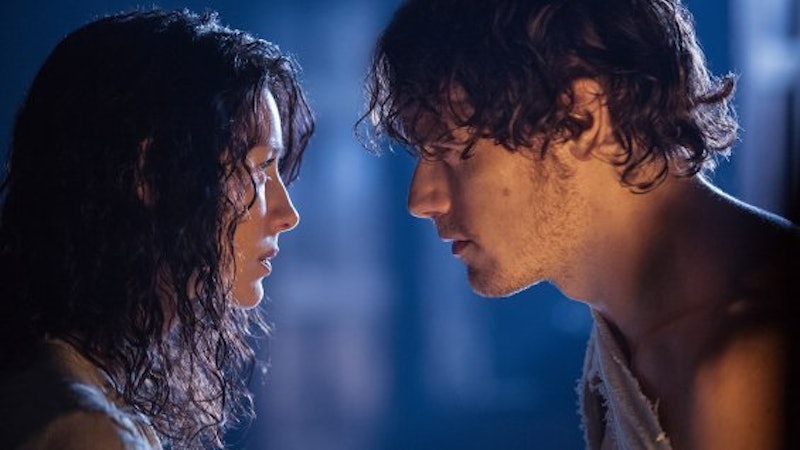 If loving Outlander is wrong, then women everywhere don't want to be right. This is a show, based on the incredible book series by Diana Gabaldon, that transcends time. Probably because the story itself bounces around from century to century. But the heart of the series is about love, and how it unbreakable that bond can be for the right two people. The first season is only halfway done, with the second half of Outlander returning to Starz on April 4. The show has closely followed the first book in the series and plans to continue to do so, at least for the rest of Season 1, so can the book spoil Outlander Season 2 too?

There's a lot of cool stuff in store for Outlander fans who have yet to read the books. The rest of the first season will showcase some major struggles for Jamie and Claire, but spoiler alert, their love will prevail. I mean, it's safe to say that Jamie Fraser would have to do something truly evil to turn any woman away for good. #JamieFraserCanGetIt. And luckily, the show has been renewed for a second season already. So if the showrunners continue to follow the books, what can we look forward to in the second season? Here are all the juiciest spoilers from Dragonfly in Amber.

Claire Has a Miscarriage

At the end of book one, Claire tells Jamie she's pregnant. But after extensive time on the road and sleeping outdoors, Claire loses the baby. Her recovery is scary and long and she takes the loss of their child very hard. Claire and Jamie grow distant.

After Black Jack Randall rapes and tortures Jamie near the end of book one, Claire finds a way to rescue Jamie and Randall is thought to have been trampled to death in the chaos of Jamie's escape. But he's not dead, unfortunately, and Randall still tries to go after them. Jamie even offers to spare his life so as not to prevent Frank from being born later. Aww.

Dougal threatens to kill Claire at one point and Jamie ends up stabbing him to death. It's sad, but not a surprise, as Jamie would do whatever necessary to keep her safe.

As the war intensifies and Jamie begins to worry that he can't keep Claire safe, he takes her back to the stones and demands she go back to her own time. She does, for him. Before she time travels, Jamie tells her that he knows she's pregnant again.

Claire & Jamie Have a Daughter

And he was right! After returning to her own time, the story fast forwards 20 years and readers meet Brianna, the adult daughter of Jamie and Claire.

We learn that Frank died just a few years before 1968, and now Claire is on a mission to find out what happened to Jamie in battle and to reveal the truth to her daughter.

Jamie Prepares To Die In Battle

He's ready to fight and he's ready to die, knowing that Claire and their child are safe and far, far away. It's heartbreaking. But upon some research in 1968, Claire learns that Jamie did not die in that battle... So he's alive?

And the plot thickens!