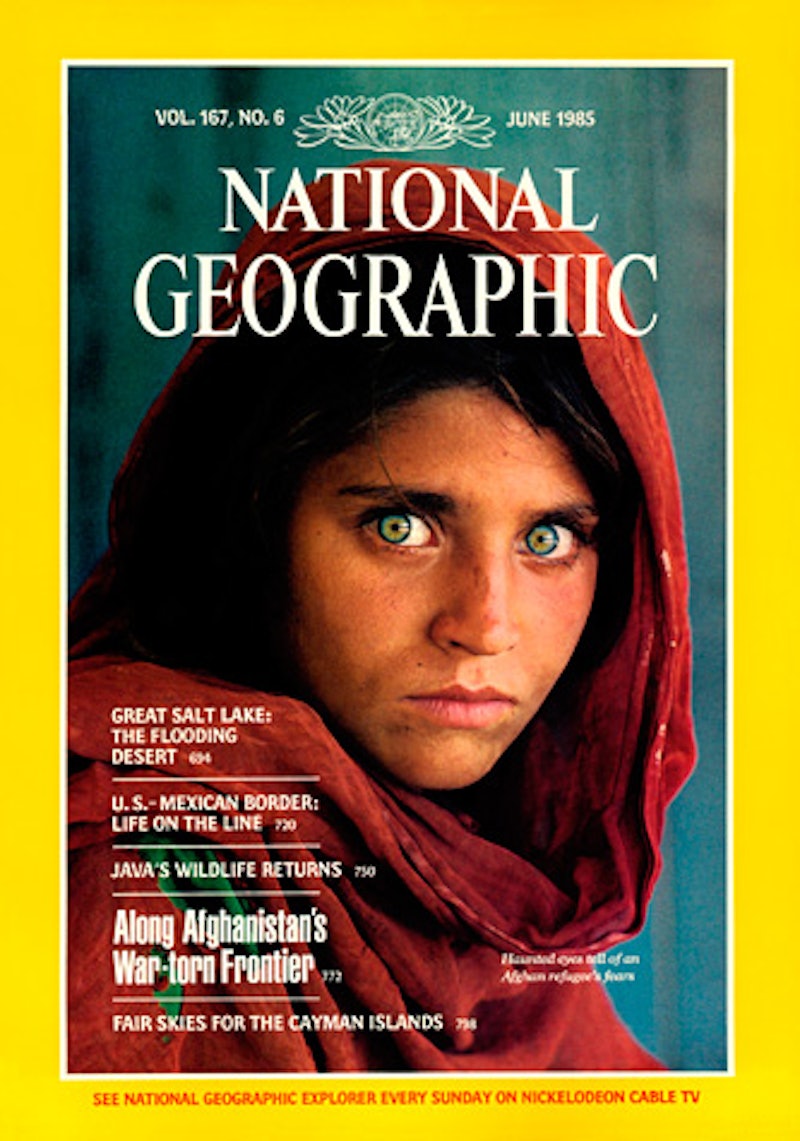 The iconic green-eyed girl that graced the cover of National Geographic in 1984 remains etched in most people's minds. She came to represent the struggle of Afghan refugees forced into Pakistan refugee camps. Now a new picture of Sharbat Gula illustrates the continued animosity Pakistanis feel toward the Afghans who stayed all these years.

A mugshot of the now middle-aged woman from her computerized national identification card (CNIC) may seem like an ordinary I.D. photo, but it's causing conflict because as a refugee, Gula should not have a CNIC. As foreign nationals, Afghans in Pakistan can buy land and open a bank account, but are not given a national I.D. A spokesman for the national database and registry authority, Faik Ali Chachar, told The Guardian that Gula's card was detected and blocked in August and four officials were suspended for their suspected involvement. According to Chachar, the agency has discovered more than 22,000 cards held illegally by Afghans.

Afghans first fled to Pakistan after the Soviet invasion of their homeland in 1979. People continued to move across the border once the Russian troops left in 1989 and Afghanistan fell into civil war. Millions have since returned, but 1.5 million Afghan refugees remain in Pakistan, the largest prolonged refugee population in the world.

Pakistanis blame the refugees for crime and terrorism and continually try to force them to leave. In 2012, the Pakistani government threatened to cancel their refugee status, but it never came to fruition.

Human Rights Watch encouraged Pakistan to stop trying to pressure refugees to return to Afghanistan in a statement this week, as more Afghans have been returning to their homeland due to coercive pressures from local governments. The pressures increased following an attack by a Pakistani Taliban group on a Peshawar school that killed 148 people in December. The statement says:

The Pakistan government has an obligation to protect all Afghans in the country, including those not registered as refugees, from harassment and other abuses.

In 2002, the photographer who took the original picture, Steve McCurry, went to Pakistan to track down Gula and found her living with her husband in Peshawar. Her family fleed to Pakistan because of the fighting during the Soviet invasion of Afghanistan. When asked if she had ever felt safe, she says:

No. But life under the Taliban was better. At least there was peace and order.

She had never seen the image of herself that circled the globe. In the National Geographic story of their reunion, McCurry says, "She cannot understand how her picture has touched so many. She does not know the power of those eyes."