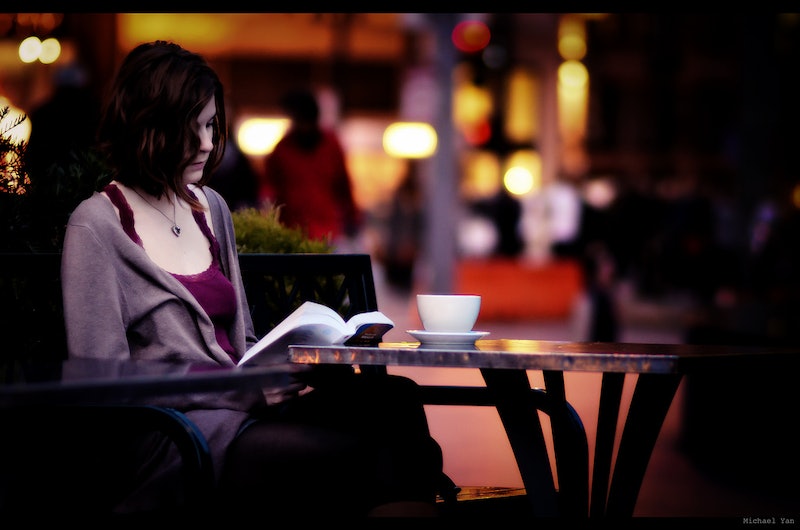 Falling in love with a new YA series can be a daunting experience. You know going in that there will be tons of angst and all the feels, and even though you know you will probably love every minute of whatever kind of adventure the book takes you on, you will be left wanting more and inevitably having to wait. Waiting sucks. But the good thing about YA action/adventure books is that there will always be more than enough to give you your fill. Waiting isn't necessary.

Now, too much of something isn't always good. Just because there are endless dystopian fantasy novels doesn't mean you will enjoy all of them. And since they're all touted as "The next Hunger Games" there's an awful lot of hype to live up to. Luckily, Red Queen was just released earlier this month and it has already surpassed the hype and has left every reader daydreaming about getting their Red-loving paws on book two, which doesn't come out until next year.

Red Queen follows the life of 17-year-old Mare Barrow, known around town and to her family as the uglier sister to Gisa, and an extremely grumpy goose. Her family is poor, they are 'Reds' and they serve the 'Silvers' which are the rich and powerful royal elite. She has powers that no Red should have, and once discovered, Mare ends up on a path to leading a revolution with an insane amount of twists and turns along the way. Not sold yet? Here are all the reasons to read Red Queen immediately, because you will become obsessed.

1. Because Insurgent doesn't hit theaters until March 20 and Hunger Games isn't back until November

We have a YA dystopian itch that desperately needs to be scratched, and with Hunger Games edging closer to its final big screen installment in November, Tris and Four's journey to over-throwing a messed up government is a great new story to follow.

Well, Red Queen is too, and since the film adaptation of Insurgent doesn't come out until March 20, you have time to kill and new powerful heroines to fall in love with. Mare Barrow is the next big thing in literature. I'm sure of it.

2. Because it's just as thrilling as any YA dystopian favorite

There's murder, there's betrayal, there's injustice, there's revolution, and most importantly, there's a strong warrior goddess at the center of it all. What more do you need in a book? Nothing. The answer is "nothing."

3. Because Mare is delightfully bitter

Who doesn't love a curmudgeon? Mare is not only known to be a grade-A grump amongst her loved ones, but that's also how the entire town sees her. She and her family are 'Reds' and are considered poor. She spends a lot of her time as a thief, stealing things to ensure her family's survival. Mare has no time for small talk and pleasantries.

4. Because her hidden power is all kinds of cool

Spoiler alert! Mare has supernatural powers, which is not common in the Red community. Superhuman talents are often reserved for the 'Silvers.' But Mare has been blessed with electrokinesis, which means she can manipulate electrical energies with her mind. Umm, yeah. That wouldn't suck.

5. Because there's a love triangle

I know, I know. Love triangles are tired and get in the way of a strong character's journey. But c'mon. We all secretly love them so let's stop pretending and embrace the Team this guy vs. Team this guy element.

6. Because the author is someone you'd as your BFF

I'm basing this on Victoria Aveyard's mind-blowing creative ability to deliver a believable and enthralling story in a fictional world. Oh, and her tweets are hilarious.

7. Because this series is about to explode

There have been a lot of books labeled as "The next Hunger Games" but have any really lived up to that? I can remember seeing the label on many many covers, but can't remember any of those titles, so that should tell you something. This one though, this series is absolutely going to make it to the big screen, there will be related Halloween costumes, and Teams will be chosen. Get ready.

8. Because there are two more books coming

We've only been given the first installment in the trilogy. The next books will be released in 2016 and 2017. So there's a lot to look forward to.

9. Because the Silvers are easy to hate

They are born with silver blood, which gives them all kinds of powers. They are wealthy snobs who are "served" by the Reds. It's just easy to hate a cold, power-hungry group of a**holes.

10. Because you can't trust anybody

Seriously NOBODY. You will go along in this book thinking you've figured the characters out and you know who Mare can trust, but then Victoria Aveyard throws a total mind-F of a betrayal your way and you are left feeling powerless and confused – in the best way possible.

11. Because of THAT TWIST

I will not say anything more. Just know that once it happens, you will feel like this: