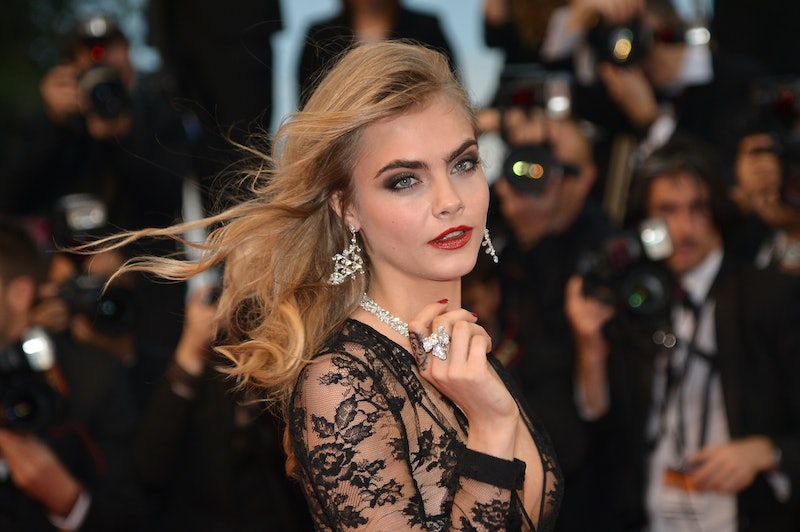 If you're even loosely acquainted with the world of fashion, you've surely seen the name Cara Delevingne at least a million times by now. Whether it's her luscious brows, her bevy of famous friends, her covetable street style, or her devil-may-care attitude, Delevingne's got that undeniable It-factor. But though she may rule the runway and have more ad campaigns under her belt than any other girl in the game, as any good supermodel knows, what really cements you as an icon with a capital I, is a starring role in a hit music video. Well, thanks to Cara Delevingne's role in rapper A$AP Ferg's "Dope Walk" video, this British wunderkind can check that off her bucket list.

Not only is Delevingne's face a permanent presence on-screen thanks to the music video's FaceTime format, but Ferg drops the model's name repeatedly as part of the song's hook. The video was shot entirely on the rapper's iPhone during New York Fashion Week and features cameos from Jeremy Scott, HAIM, and Kanye West, amongst many others. But Delevingne remains front and center throughout. While the video pays tribute to the popular model, in a way, it's also a challenge. Ferg proclaims that his "Dope Walk," a dance of his own creation, is "hotter than Cara Delevingne's." (But, secretly, we've got a feeling she could easily take him.)

Delevingne isn't the first to cement her super status via a featured role in a music video. Over the past three decades, there's been a long line of models who have proven this to be the surefire way to propel yourself into endless fashion fame. I've gathered a few of the best examples below, from Helena Christensen's steamy seaside romp to Kate Moss teaching us all how to properly work a pole. Welcome to the club, Cara!

Christie Brinkley is the definition of an uptown girl in her cascading diamonds and floral frock.

It doesn't get much sexier than "Wicked Game," and we can't imagine anyone better to cast in the role of cruel seductress than Chris Isaak's real-life lover, Helena Christensen.

This video is the epitome of supermodel madness. Starring Naomi Campbell, Linda Evangelista, Christy Turlington, Cindy Crawford, and Tatjana Patitz, it doesn't get more stylish than this.

In this nine-minute ode to lost love, Axl Rose pays tribute to his then-girlfriend Stephanie Seymour. Even if you're not a fan of Rose, this video is totally worth it to see Seymour's wedding dress mini skirt.

Watch as Michael Jackson woos a royal Iman away from her husband, Eddie Murphy, with some fancy footwork.

This video is often overlooked as a supermodel classic, but once Alek Wek steps out of that pool in a gunmetal dress, you'll see why this one made the list.

There's so many stars in this video it's hard to keep track, but even so, Naomi Campbell's cameo is obviously head and shoulders above the rest.

In this Sophia Coppola directed video, Kate Moss teaches us all a thing or to about how to properly grind up on a pole and perform the perfect striptease. Ladies, take note.

Though the song is saccharine at best, Gemma Ward is drop dead gorgeous, per usual, and makes this whole video totally worthwhile.

Love it or hate it, this is the music video that launched a thousand Emily Ratajkowski magazine covers.

As if Beyoncé wasn't already #flawless enough, she had to go ahead and feature the hottest models around — Joan Smalls, Jourdan Dunn, and Chanel Iman. This video may be too much for mere mortals.

Now this is a cult we wouldn't mind joining.