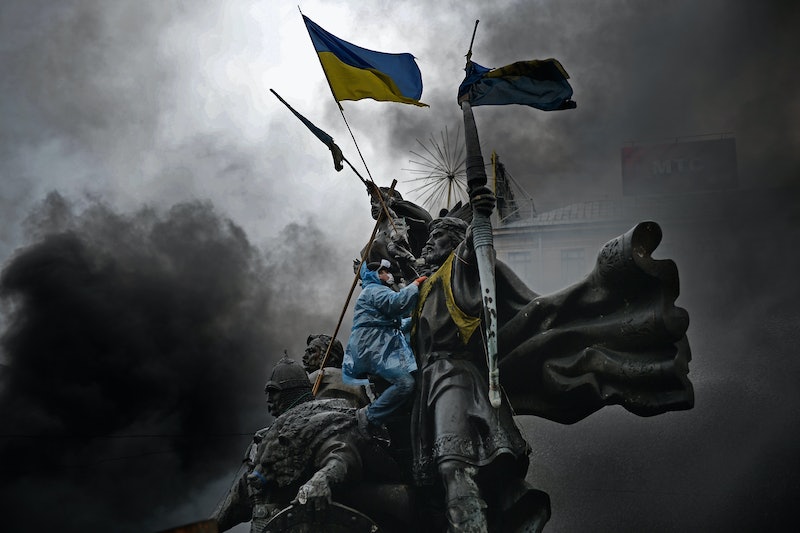 In an indication of the country's recognition of the Minsk ceasefire agreement brokered by France and Germany, Ukraine began withdrawing heavy artillery from the front line in the east on Wednesday, perhaps to the collective sigh of relief on Western Europe and Russia's part. In a statement released Thursday, the Ukrainian Defense Ministry detailed its withdrawal, adding that it would be monitored by the Organization for Security and Cooperation in Europe:

In accordance with the agreement reached in Minsk on February 12, today Ukraine begins withdrawal of 100mm artillery from the disengagement line. It's the first step towards withdrawal of heavy weapons, which will only be carried out under OSCE monitoring and verification.

The Ukrainian military also said Thursday that there has been no combat casualties in the past 48 hours, the first time no fatalities have been reported since long before the peace agreement was supposed to take effect.

Last week, pro-Russian separatists captured Debaltseve, a strategic town at the center of recent intense fighting, in a blitz that President Petro Poroshenko called a “brutal violation” of the Minsk agreement signed just days before. Rebels had claimed to start withdrawing after Debaltseve's capture, but Ukraine refused to follow suit, arguing that the battle was still being waged. Thursday's announcement, however, marked a hopeful signal of the government's support for the ceasefire.

Artillery withdrawal is "point two" of the Minsk peace agreement, so its undertaking implies that both sides now recognize the observance of the ceasefire itself, which is "point one" of the deal, reported Reuters. The military's statement however, did note that it would alter the withdrawal schedule as it saw fit "in the event of any attempted offensive."

Following the peace agreement signed in Minsk, Belarus, rebels continued fighting in Debaltseve, claiming the truce did not apply there and launching one of the fiercest and deadliest advances in the conflict that has already seen more than 5,000 dead. But since taking control of the town, they have taken pains to stress their compliance of the ceasefire.

Michael Bociurkiw, a spokesman for Ukraine's OSCE mission, said monitors are expecting to receive inventories of heavy weaponry from both the pro-Russian separatists and Ukrainian forces by way of evacuated routes and secure storage areas where the withdrawals could be verified. According to the New York Times, Bociurkiw said:

It’s not a one-shot deal. We don’t want to be put in a position where we are rubber-stamping movements. Our bottom line is credible verification.

In the meantime, the political players involved in the conflict continue to butt heads. Officials from Ukraine and its Western allies have repeated their accusations of Russia stoking tensions and arming the rebels — the latter of which Moscow has denied. Many have warned Russia that further sanctions will be imposed if the rebels make more territorial gains, leading the Kremlin to respond that sanctions threats were the West's attempt at undermining the Minsk agreement.