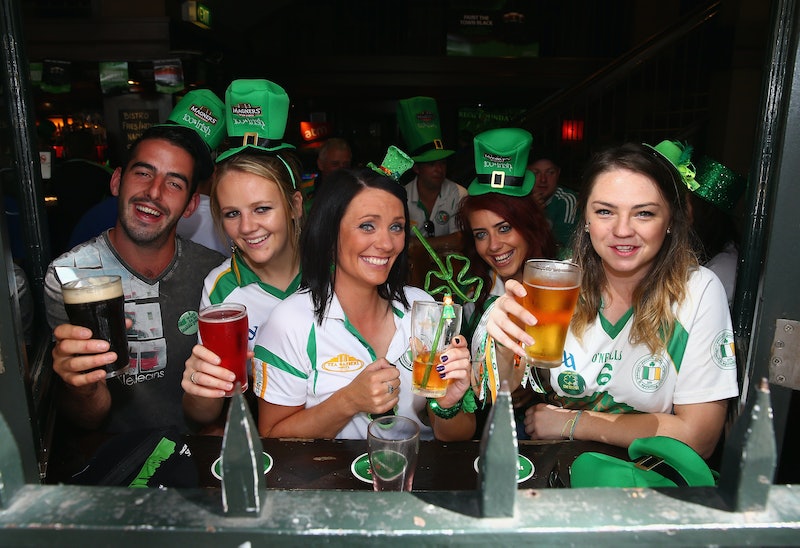 St. Patrick's Day in America is essentially the day when everyone pretends to have Irish roots, upholds traditions that are not even Irish (corned beef and cabbage is actually an American dish, for the record), and tries to put their mouths all over other strangers' mouths. St. Patrick's Day is also a spectacular celebration with green beer and shamrock-shaped everything, and a perfectly justifiable reason to leave work early and head to the bar.

And as you pass the threshold and on through those welcoming pub doors, you will be greeted with lots of harsh sights, sounds, and smells. Your eyes will need a moment to adjust to all the green shirts, giant leprechaun hats, and gold treasure necklaces. Someone will definitely have vomited already, so the air will be pungent. Things are about to get real, whether you like it or not. St. Paddy's Day brings out the most interesting local characters you can find, and they will certainly add to your enjoyment or mild fear of this holiday. But as interesting as these drunken fools are, they also fall into one of seven standard SPD bar hopper categories. Here are the types of people you will meet at the bar on St. Patrick's Day, no matter where in the country you are celebrating.

1. The One Who Started Way Too Early

They used a vacation day to eat eggs and potatoes on a bar stool, only to drink a case of Guinness and then return that very breakfast to the toilet. Give them a high five because really, A for effort.

Something like a cartoon beer mug that's saying, "I want to be inside you." Or a t-shirt with a name tag graphic with the name "Pat McRotch" written in. They think it's hilarious. Other people with the same (lazy/disgusting) sense of humor will give them high fives all night long. They will approach you and point to the shirt, as a non-verbal suggestion for whatever their shirt says. These people need to stop ruining the best day of the year. For real.

3. The One Who Loves Everyone

They just want to hug you and smash their mug against yours as a sign of peace and equality.

4. The One Who Really Wants To Discuss Their Irish Heritage

"No, my family is from this part. I have a great uncle there now. He owns a pub." I don't know why it always turns into a competition of who the most Irish person in the group is, but it never fails. In a way, it's also kind of adorable? We all just want to be Irish, OK?

5. The People Using Their T-Shirts As Mistletoe

On Christmas, it's a weed with a ribbon and on SPD, it's a green t-shirt. I dunno. Humans just love smooching.

6. The One Who Thinks This Holiday Is About Being Brutally Honest

Irish people have a reputation of being stubborn and brutally honest, so on March 17, there are people who really put their heart and soul into the role. When this person approaches you and says, "Can I get real with you for a sec?" just brace yourself.

7. The Girl Who Spends The Whole Night Dodging Drunk D-Bags