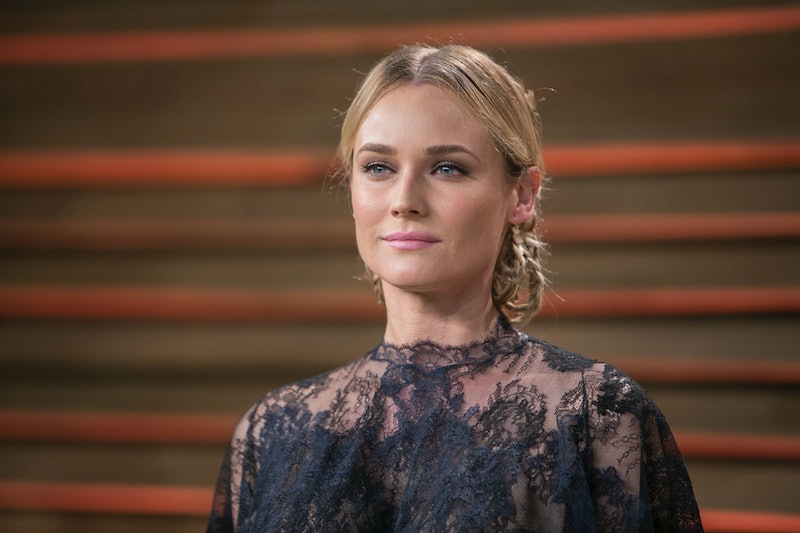 Diane Kruger is the latest female celebrity to join the #AskHerMore campaign, and spoke to to Yahoo! Style UK at the Elle Style Awards 2015 in London about the cause. "I think as a woman... I am interested in fashion and make-up and all those things but I actually am interested in other stuff in life!," she said. It's not a newsflash to any celebrity, actress or woman for that matter that women are multidimensional, but Diane Kruger's words on #AskHerMore and her clarification of the idea behind it is necessary for the media, whose inane and sexist questions on the red carpet inspired the #AskHerMore campaign in the first place.

Women in Hollywood are just plain fed up with being asked, inevitably, at every awards show: "Who are you wearing?" or questions that are variations thereof. The movement is gaining steam, and Kruger's involvement proves just that. Hopefully the momentum of #AskHerMore will force reporters on the red carpet to respond and start asking questions that are more substantive as soon as humanly possible, because if they don't, they would just be embarrassing themselves.

At the 87th Annual Academy Awards on Sunday, Reese Witherspoon spoke about #AskHerMore and summed it up succinctly and perfectly like a boss: "We are more than just our dresses." Again, it sounds like a Captain Obvious statement, but as far as journalists and reporters on the red carpet go, it's something they need to be told loud and clear until they get it through their skulls.

Kruger went on to tell Poppy Jamie from Yahoo Style: "I'm an actress, I have a job, I have a life. There so many other things that... you would ask a man but you wouldn't ask a woman." When Jamie asked her what kinds of questions she would like to be asked, Kruger offered:

Superficial is an understatement. It's all the more powerful that Witherspoon refused to talk about her dress at the Academy Awards, where she was nominated for Best Actress for playing Cheryl Strayed in Wild. It's the highest honor for an actress in Hollywood, so why wouldn't reporters on the red carpet take their five minutes of airtime with her to talk about developing the role, the physical and emotional experience of playing Cheryl Strayed, working with Laura Dern — I could come up with a million more questions.

Kruger and Witherspoon are loud and proud about how exhausted and downright insulting it is that red carpet questions are often limited to dresses, bags, shoes and jewelry. It's ironic that at awards shows meant to honor these actresses' talents, their skills and craft are totally ignored in favor of wondering how they fit into that dress.

It's frustrating that women in Hollywood are reduced to their sexuality and style, when they could use the red carpet to not only discuss their careers but also to promote their own causes and raise awareness on different issues. And they could STILL talk about who they are wearing. Imagine that — being able to answer two questions at once! So get it together, red carpet reporters: you've gotta start asking better questions, or you're going to get consistently shut down, and that's just embarrassing.