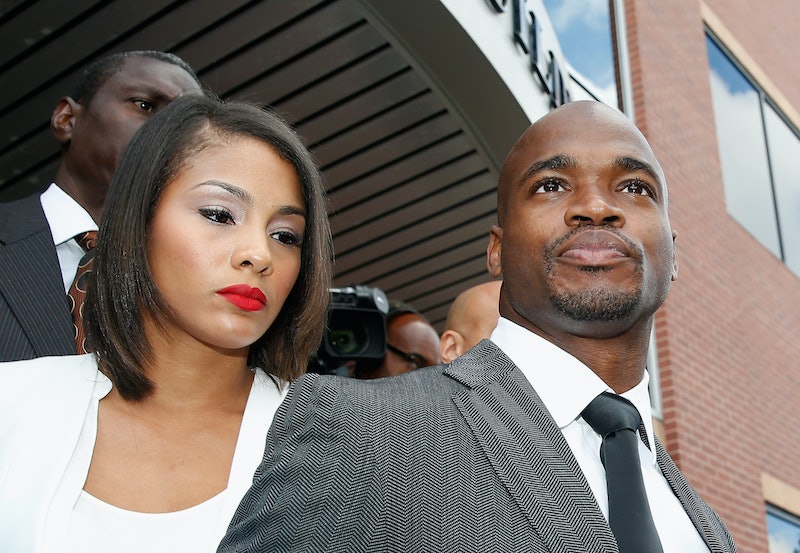 Despite a legal victory in Judge David Doty's courtroom, disgraced Vikings' running back Adrian Peterson has yet to determine whether he'll ever win another game on the gridiron. In a decision that was shocking only in how decidedly unsurprising it was, Judge Doty overturned Adrian Peterson's suspension from the National Football League, which was initially issued after the star athlete was embroiled in a child abuse scandal that shook the NFL and its fans. The incident, in which Peterson used a switch to inflict cuts and bruises to his son's back, buttocks, ankles, legs and scrotum, drew national ire, and only added to the drama caused by the Ray Rice domestic abuse infamy. Both men, however, have now won their appeals, thanks to Judge Doty's long history of siding with players and players' unions. Still, it is unclear whether either football player will ever touch the pigskin in a professional setting again.

Following Judge Doty's ruling on Thursday, executive director of the NFLPA, DeMaurice Smith, issued a statement in which he praised the justice of the verdict. "This is a victory for the rule of law, due process and fairness,” Smith said. “Our collective bargaining agreement has rules for implementation of the personal conduct policy and when those rules are violated, our union always stands up to protect our players’ rights. This is yet another example why neutral arbitration is good for our players, good for the owners and good for our game."

Of course, whether it is good for the significant others and children at stake in these cases is still up for debate, but then again, the NFLPA does not represent those without power (by way of athletic prowess). But in yet another layer of complexity that will only further elongate proceedings, the NFL has made clear its opposition to Doty's ruling, and has promised an appeal of its own. In a statement, NFL spokesman Brian McCarthy noted,

We believe strongly that Judge Doty's order is incorrect and fundamentally at odds with well-established legal precedent governing the district court's role in reviewing arbitration decisions. As a result, we have filed a notice of appeal to have the ruling reviewed by the Eighth Circuit Court of Appeals.

Both Peterson and Rice have benefited by way of a timing technicality — following the national outrage that resulted from each player's misconduct off the field, the NFL responded with an enhanced personal conduct policy that increased the penalties leveled against athletes who engaged in inappropriate — and indeed, criminal — behavior away from the game. But because this was only implemented after both domestic abuse cases took place, judges have ruled that Rice and Peterson were exempt from the extended bans, and that the NFL overstepped its boundaries in issuing such overarching penalties.

While such decisions should come as good news for players like Rice and Peterson, their fate within the NFL remains ominously murky. Rice, whose indefinite suspension was overturned in November of 2014, remains a free agent, unattached to any team despite a promising career with the Baltimore Ravens. And while Adrian Peterson is widely regarded as one of the best running backs in the game, the stigma of being a child abuser is not all the athlete will have to address — though it may seem like he's on his way back onto the field, he only managed to play one game in the 2014 season. Moreover, the shelf life of any athlete is decidedly short, and the NFL's high injury rate only compounds this issue. Peterson will soon turn 30, and teams may have to weigh how effective a player the running back will be come next season.

The Vikings have maintained that they will welcome Peterson with open arms when he is eligible to return, issuing a statement that read,

Adrian Peterson is an important member of the Minnesota Vikings, and our focus remains on welcoming him back when he is able to rejoin our organization. Today’s ruling leaves Adrian’s status under the control of the NFL, the NFLPA and the legal system, and we will have no further comment at this time.

But some experts say that Peterson may be looking to move from Minnesota to Dallas, joining Tony Romo and the Cowboys franchise — if they'll have him, that is. Regardless, there remain a number of moving pieces and details, both personal and professional, that must be sorted out before he can even consider returning to football. And in the meantime, don't worry about how he's doing financially — in 2011, the running back signed a stunning $96 million contract with the Vikings, so he'll be fine whether or not he ever touches a football again.

Less fine, of course, is the NFL's supposed commitment to maintaining some sort of standard on players' characters — because apparently, when you can catch a ball like Adrian Peterson, all ethics goes out the window.